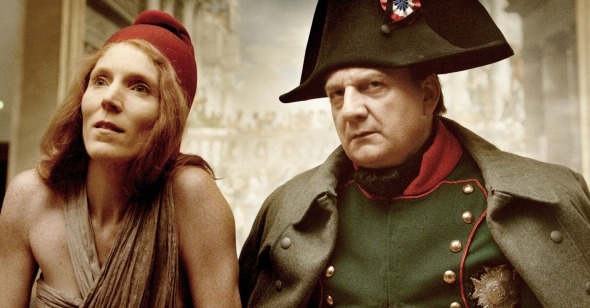 Europe Is Near
by Daniel Witkin

Never one to shy away from thematic heft, Russian director Alexander Sokurov has affixed his new movie Francofonia with the brazenly weighty subtitle “An Elegy for Europe.” Those familiar with the Siberian-born filmmaker’s oeuvre may note that this is not the first time that the director has concerned himself with elegy, the “lament for the dead” also handily defined by the good folks at Oxford as “a serious reflection.” Serving as the film’s active and eager narrator, the director sonorously intones, “Misfortune can strike even the happiest country.” For reasons that require no explanation, this statement remains relevant to contemporary Paris, whose symbolic value to Western civilization—whatever that entails today—ensures its continued prominence as both target and rallying point.

It’s indicative of the tenor of the director’s wider output that this particular serious reflection, which engages very earnestly with the fate of a continent, appears to be a relatively light work. Part of this can be chalked up to a freewheeling structure that keeps the film nimble over its modest ninety-minute runtime, though it’s also due to inevitable comparisons with Russian Ark, Sokurov’s 2002 foray into an A-list destination museum, namely St. Petersburg’s Hermitage. The famously one-shot Russian Ark is nothing if not monumental, its sole sinewy take forging a powerful, if idiosyncratic, continuity through Russia’s cultural and political history. In contrast, Francofonia is digressive and heterogeneous, the director’s musings working to suture together a number of running threads, most notably the relationship between wartime Louvre director Jacques Jaujard (Louis-Do de Lencquesaing) and his German overseer Franz Graf Wolff-Metternich (Benjamin Utzerath), but also an after-hours ghost story (think Russian Ark meets Night at the Museum), straightforward historical documentary segments, and a Skype chat between the director and a fictional Anglophone seafarer named Captain Dirk. Where Russian Ark deliberately decontextualized its various vignettes, Francofonia is generous almost to a fault with exposition, tracing the development of the German occupation in a leisurely manner.

Still, the two films are not dissimilar. For all its undeniable pedigree as a prestige piece, a state-sanctioned technical marvel staged at a national landmark and premiere tourist destination, Russian Ark is startlingly weird. As his protagonist, Sokurov selected the Marquis de Custine, an openly gay French aristocrat who visited Imperial Russia in 1839 and found it very much not to his liking. Alongside this cranky interloper, the camera glides through the halls of the museum, which embodies the past in the manner of a ghost ship. The final image of the Neva River is beautiful despite its implication that we may be trapped onboard forever.

Rather than presenting the story of Jaujard and Wolff-Metternich as a sort of high cultural bromance, tracing the relationship between the French bureaucrat and Teutonic nobleman as they meet cute, learn to trust one another, and ultimately learn that the swastika and fleur-de-lis are but decorations masking their kindred, beating European hearts, Sokurov places it alongside more abstract and elusive narratives. Similar to Russian Ark, one of these threads takes a maritime theme, chronicling the ill-conceived adventures of melancholy Captain Dirk as he attempts to haul artistic treasures across the sea, an overt parallel with Sokurov’s account of the French Empire’s costly transportation of loot from the Middle East, during which many priceless artifacts were lost in the journey.

The style of Sokurov’s previous museum piece is echoed in segments that follow actors portraying Marianne (Johanna Korthals Altes), symbol of French revolutionary values, and Napoleon (Vincent Nemeth) as they cavort around the nocturnal museum, generally failing to communicate as though an absurdist nightclub duo. Other high-profile historical cameos are made by Anton Chekhov and Leo Tolstoy, photographs of whom open the film. The inclusion of the latter seems relevant, as the wildly ambitious novelist’s most imperious gesture was arguably his challenge to the myth of Napoleon in War and Peace, making a mere mortal out of the archetypical great man. Sokurov, conversely, conceives of the Emperor as a monumental ham, sticking out his tongue at the camera and spitting out monologues about his own personal greatness. Decked out in an anachronistic trench coat, he’s less an individual than the embodiment of a civilizational mania, as if the whole continent were saddled with a particular sort of Napoleon complex.

The idea of madness is central to Francofonia, as evidenced by Marianne, Napoleon, and Captain Dirk, all of whom are firmly in the grip of evident pathology, as well as the filmmaker’s occasionally definitive monologue (for instance, “The First World War was almost domestic, fought family by family, and was thus particularly cruel and insane”). Even the existence of the museum itself seems to betray a kind of obsessive tick, on which Sokurov bestows the title “museum fever,” the compulsive collection and preservation of global cultural heritage in which wonder and conquest perilously commingle. “It was the best passion the old world was capable of,” the director laments. “Given its fondness for waging war for whatever reason.” Yet Sokurov’s weakness for the occasional absolute statement is outweighed by a tendency toward self-interrogation; he is perpetually posing grand questions about history, art, and life. What would have become of European culture without portraiture? Who would Sokurov himself be without the tradition of representative painting? As the filmmaker’s questions proliferate, one begins to wonder exactly how rhetorical they are and what the consequences to answering them might be.

In his formal mashing-up on one hand and his schizophrenic essayistic musings on the other, the Sokurov of Francofonia recalls no one so much as latter-day Godard, who in 2010’s Film Socialisme similarly endeavored to put Europe on a boat. But while the Gallic New Waver works upon his films like a kind of trickster god, Sokurov feels more like a bemused older relative, using the viewer as trusted confidant and sounding board for his passions and worries.

Unlike the dogged modernist Godard, Sokurov is a tried-and-true Romantic, as shown by the emotional and formal abandon of his 2011 Faust adaption. To wit, his new work is peppered with plaintive orchestral music and the paintings of Hubert Robert, a recurrent object of affection and the subject of 2001’s Elegy of a Voyage; Robert’s lush treatments of ruin and decay recall the Russian filmmaker’s painterly color schemes and nagging morbidity. Sokurov’s evident reverence for the objects of his gaze imbues them with special poignancy, even if the cosmic scale of his historical perspective runs the occasional risk of feeling a bit inhuman, as if viewing the whole world as yet another mysterious artifact. At one point he asks, “Who needs France without the Louvre or Russia without the Hermitage?”

In addition there are moments in which Sokurov’s historiography comes off as somewhat faulty. The film sets the relatively cozy relationship between Jaujard and Wolff-Metternich against the brutality of the Eastern front, particularly the Siege of Leningrad, through which the Hermitage suffered alongside the rest of the city (the director is based in St. Petersburg). However, his repeated emphasis on the shared heritage of France and Germany (often referred to as “sisters”) puts a gloss over the German occupation in the West, making it feel altogether quite civil. Similarly, at one point the filmmaker promotes the inaccurate and uncomfortably nationalistic notion that French acquiescence to German rule was motivated largely by opposition to Russian bolshevism, ignoring the considerable efforts of French leftists and Western anti-fascists in general, not to mention the consequences of Stalin’s misguided strategic pact with Hitler.

Still, this is a film whose value lies much less in historical detail than bemused philosophical inquiry, which Sokurov offers with nearly comic generosity. “Maybe all this never happened, maybe we dreamt it,” he proposes. “We do have such extraordinary writers and philosophers.” Likewise, the film’s finale-cum-punchline offers a sardonic commentary on the fundamentally unbelievable nature of the twentieth century. Maybe, the movie implies, awareness of history’s horrors, contradictions, and alien splendors can trigger a sort of delirium. Or maybe it’s just museum fever.