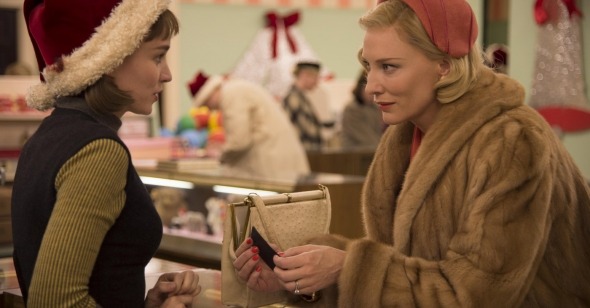 The Touch
by Jeff Reichert

There are two touches that animate Todd Haynes‚Äôs Carol. Each is played twice, first from the perspective of the audience, at the outset of the film, before we know anything of the story or of the characters. The second time is much later, after we‚Äôve experienced waves of emotional exhilaration and devastation, at a time when we couldn‚Äôt be closer to the people involved or more invested in the implications of even the simplest gesture. When we first see two hands touch the shoulder of Rooney Mara‚Äôs Therese, we don‚Äôt see her face; tellingly, when the gesture is repeated, Haynes shows us the reverse angle, in close-up. One touch, given her by a jocular chap named Jack registers not at all, while the other, firmer, more lingering, applied by Carol, the lover who abandoned her not long prior, shudders her, makes her eyes come to life.

Touch is of paramount importance in Carol, which is adapted by Phyllis Nagy from Patricia Highsmith‚Äôs 1952 novel The Price of Salt. Characters don‚Äôt connect physically unless it‚Äôs crucial. Occasionally they do so in anger, as in an argument between Carol (Cate Blanchett) and her husband, Harge (Kyle Chandler), that grows violent and ends with the man embarrassed and on the ground; occasionally in desperate affection as when Carol hugs her daughter, Rindy, legally kept from her on grounds that her mother is morally indecent, after a long separation. The majority of the contact in the film comes between Carol and Therese, appropriately since this is their love story. The film takes places during the Eisenhower administration, and given that they are two women, there‚Äôs a complicated semiotics to the way Carol and Therese can touch. After their initial meeting, there are oddly stilted bits of contact, friendly but cool; then, as the women grow more intimate, their physicality takes on a cautiousness, a desire for the continuance of each minor caress but also a desire to avoid a potential rebuff by pushing too hard. Once it seems clear to both that their feelings are reciprocal, things grow intimate enough that one hand might drop on top of the other‚Äôs at a diner and stay there for a bit. At every turn, every touch, you might find yourself holding your breath.

After those first two touches, Therese leaves the bar with Jack and heads downtown to a party. We glimpse her looking longingly out through a rain-soaked car window, and Haynes flashes us back a few months so gently we barely even feel time slipping away. Therese and Carol first meet in a department store at the tail end of 1952. The older woman is there to buy a Christmas present for her child. The younger for no other reason than that it‚Äôs a job to help structure her days and cover the rent. We‚Äôll learn later that Therese has aspirations as a photographer, but in that moment, when a leonine Blanchett stares her down, recognizing something, some potential in Therese that the girl doesn‚Äôt yet know herself, she‚Äôs a deer in the headlights. Their interaction is brief, cordial; Therese makes the sale of a train set, but Carol leaves her gloves behind, setting in motion an old school movie love affair, the kind that‚Äôs in short supply these days. Of course it would have to be the gloves.

Early on in Carol, while we‚Äôre still learning about Therese, a friend of hers compares the science of attraction to quantum physics‚Äîpeople are just particles bouncing around and off each other, finding and shedding attractions as they move. This suggests a simultaneous inexplicability (how to track a particle?) and inevitability (if there are two particles on a path to collide, they likely will). As she finds herself falling in love with Carol quickly, inexplicably, inevitably, after just that initial meeting, a phone call and a lunch, Therese, while walking home with her coworker and ostensible boyfriend, Richard (Jake Lacy), asks him with open curiosity if he‚Äôs ever fallen for a boy before. With evident disgust, he says only that he‚Äôs ‚Äúheard of such things,‚Äù dismissing her question. It‚Äôs clear from how she asks, that the idea of a same-sex relationship, while unfamiliar, isn‚Äôt out of her realm of possibility. When she later announces to Richard that she‚Äôs leaving with Carol on a trip, he demeans her, accusing her of acting on a silly ‚Äúcrush‚Äù‚Äîhe needs to minimize his fear of the unfamiliar.

Richard doesn‚Äôt question her sexuality outright. Similarly, Harge can never refer to it directly, even though he knows his wife had a running affair with her best friend, Abbie (Sarah Paulson); the best he can muster is a reference to his wife‚Äôs ‚Äúkind.‚Äù Carol‚Äôs retort is stinging: ‚ÄúYou married this kind of woman.‚Äù But the film never condemns Harge, even though his awful power games surrounding control over Rindy are thoroughly despicable. He loves his wife, or at least the idea of what he thought his wife was. He‚Äôs hurt and baffled, and humiliated and unable to assimilate her desire into his straight worldview. But notably both Richard‚Äôs and Harge‚Äôs reactions acknowledge that same-sex desire exists on a believable spectrum of urges‚ÄîHaynes plumbs deep here, in a movie of women, trying to understand these men, rather then ridicule them. In doing so, he turns up a larger truth: much as some might long to pretend it so, homosexuality is not a recent invention, and desire has never been a stable thing. That was acknowledged, by some at least, even back in the 1950s.

To Therese, that she has fallen in love with a woman may not be the most miraculous thing about her whirlwind romance. What seems most important is that Carol exists at all and has found her. She‚Äôs been noticed, is now listened to. This is heartfelt stuff for a filmmaker whose career has often veered toward the conceptual. Yet all Haynes allows himself by way of meta-commentary in Carol is an early scene in which Therese and a few friends watch a movie from the projection booth. One of them, notebook out, casually mentions that he‚Äôs studying ‚Äúthe differences between what they [the movie characters] say and what they‚Äôre feeling.‚Äù Carol asks that we disregard stereotypical notions of sexuality and merely do the same. It‚Äôs a film that luxuriates in details, in textures, and specificity of places and costumes, and the particulars of Carol and Therese‚Äôs sexuality are absolutely crucial, yet also not the endpoint. What is it they say about finding the universal in the specific?

Blanchett‚Äôs performance initially overwhelms Mara‚Äôs. The former stops the screen dead and demands that we look closely, her high cheekbones and almond-shaped eyes highlighted by makeup giving her an even more unreal feline aspect. In Carol she‚Äôs always ready to pounce. Swaddled in furs and bright colors, she stands out in any frame, even in against the opulence of an upscale restaurant, or the bustle of fancy Christmas party. Forget Blanchett‚Äôs virtuosic, yet highly technical turn in Blue Jasmine: this may be her defining performance. Mara, with her perfectly circular hazel eyes and pinpoint pupils, plays Therese as a na√Øf, and seems in danger of being swallowed by Blanchett entirely, until her loss of Carol allows the actress to come into her own. It‚Äôs not until Carol‚Äôs gone from her that we fully experience just how much she meant to Therese and how much Rooney has held back, in this film, and perhaps any other she‚Äôs appeared in.

Far from Heaven, Haynes‚Äôs other fifties-set drama of forbidden desire, begs comparison with Carol. That earlier work was intentionally denaturalized‚Äîfrom the lighting schemes, to the cheap, phony exteriors, to the mannered performance styles. It was openly playing with Douglas Sirk conventions, but here Haynes, over a decade later, seems to have assimilated the whole of classic Hollywood grammar. Carol isn‚Äôt pastiche though; Haynes still favors layered compositions that wouldn‚Äôt have passed muster in the Golden Days‚Äîso many shots showcase characters placed about a third of the way into the image from the side of the frame, while opposite is a wall, or something in the foreground that obscures depth and often hides another figure from view. Yet even when there is visual remove from a character, or an unexpected bit of empty space, there‚Äôs still a closeness, a tactility to the world it conjures; Ed Lachman‚Äôs shooting and lighting here is in almost direct contrast to his work in Far from Heaven. No longer are we purposely kept at arm‚Äôs length by artifice. Carol is vivid, emotional, and deeply sad. It‚Äôs an enveloping womb of a movie.

Near the film‚Äôs climax, a resigned but defiant Carol, separated from her lover, fighting with her husband over her child‚Äôs future, scuttles her lawyer‚Äôs attempts to present her as legally virtuous in the eyes of their era. ‚ÄúWhy should I live against my grain?‚Äù she says as she cedes the battleground to the morality of the day. Freed, she reaches out to Therese, which precipitates a meeting, and a visual reply to those two touches we saw at the beginning of the film. Carol has left Harge for good, gotten a job, and invites Therese to move into an apartment with her, an offer that the younger woman proudly and quickly rejects. Now that we can see her face, it‚Äôs clear at the very instant that Carol touches her shoulder that she regrets this choice immediately.

Later, we finally get to see the party that Jack invites Therese to at the beginning of the film. Richard is there, dancing closely with a new girl, and Therese, shaken by her encounter with Carol, seems distant from everything around her. A woman, Genevieve (Carrie Brownstein), enters the party and sees Therese. There are those subtle signifiers again, that exchange of glances, yet this time, Therese, opened up by experience, recognizes in herself what Carol saw all those months ago. Genevieve approaches her and begins flirting, and everything changes for Therese, precipitating the film‚Äôs heart-stopping final few moments. As Therese approaches Carol at a restaurant, everything slows, and the camera bounces and jostles through the crowd. It may just be one character walking across a room toward another, but contained therein is the boldest, most romantic, most optimistic gesture of Haynes‚Äôs filmmaking career. The score swells and everything‚Äîsound, image, meaning‚Äîcrescendos into longing, hope, radiant acceptance, and desire. They‚Äôre in love. I think I might be, too.