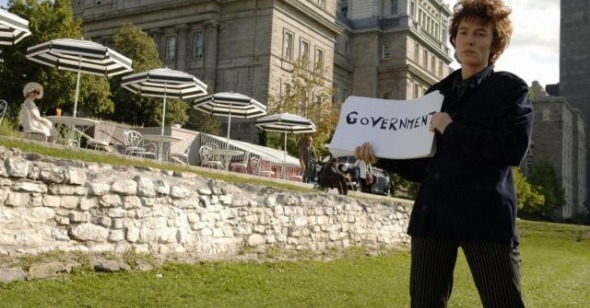 I'm So There
by Jeff Reichert

I‚Äôm Not There
Dir. Todd Haynes, U.S., The Weinstein Company

Not being the world‚Äôs foremost Bob Dylan expert, but thoroughly loving the films of Todd Haynes, I‚Äôm either the best or worst viewer for Haynes‚Äôs new Dylan movie I‚Äôm Not There. It‚Äôs not that I don‚Äôt care for Dylan‚Äôs music‚ÄĒI actually like what I‚Äôve absorbed through cultural osmosis and some personal investigation a great deal. But given the sheer volume of material and the accompanying mountain of discourse, criticism and myth-mongering surrounding the man and his songs, the biggest question for me has always been: How to possibly begin really learning about Bob Dylan? So, I‚Äôve generally sat on the sidelines. Those hoping that I‚Äôm Not There, with its splintered Dylans encompassing different portions of the man‚Äôs career, is the ur-text that will provide a greatest hits of a life (like a Ray or Walk the Line) will be sorely disappointed with Haynes‚Äôs more ambitious project. I‚Äôm Not There tells something like the story of Bob Dylan, but very obliquely‚ÄĒno one here is named Bob Dylan, some characters only bear passing resemblance to him and others adopt the monikers of famous persona who influenced the songwriter (Woody Guthrie, Arthur Rimbaud, Billy the Kid). Yet by so forcefully rejecting standard biographical filmmaking practices, Haynes has exploded the genre entirely and pushed his material into a series of dialectical relationships which finds histories actual and manufactured (and some that fully blend both categories) crossing swords all en route to a far richer and more multifaceted experience than any standard biopic. If one were to posit a simple thesis statement for I‚Äôm Not There, it‚Äôd read something along the lines of: an honest attempt to reckon with the myriad ways in which Bob Dylan absorbed and was absorbed by American culture. The crux being that absorption process‚ÄĒthe moment where the two touch each other is the catalyzing one. That we can speak of these questions at all in relationship to a film genre that‚Äôs grown beyond moribund in recent years speaks to merely one of the reasons why I‚Äôm Not There is great art.

I‚Äôm Not There is generally indescribable on a narrative level, moving as it does in fits and starts through history and locales with the only connective tissue being the idea of Dylan, who himself isn‚Äôt there. Or, better, the film is describable, but description is worthless, lacking as it does the thrilling experiential quality of watching Haynes‚Äôs various scenarios rub up against each other. Each of the individual ‚ÄúDylan‚ÄĚ narratives has its own forward progression, but the general impression of the work overall is of a series of geometrically impossible circles that somehow manage to be concentric, yet simultaneously intersecting. Or perhaps more apt: I‚Äôm Not There is some kind of mutant DNA strand, endlessly replicating itself to increasingly varied results. Given that a central pillar of Haynes‚Äôs Dylan argument rests on notions of performativity and self-reflexive identity manipulation, the decision to embody Dylan through multiple performers may be one of the film‚Äôs most commonsense maneuvers. Or, it might just be the most radical move made in a film of this size and scope in a long time. I waver because even approaching a grasp on Haynes‚Äôs accomplishment this early in its lifespan is a difficult prospect at best. I‚Äôm Not There is a text that may well take years to unravel. While it is easy (and correct) to note the strength of the performances, especially Cate Blanchett, marvel over Jay Rabinowitz‚Äôs totally unhinged yet completely calculated editing, or Ed Lachman‚Äôs cinematography, boundless in its ability to capture the feel of different eras, as well as the man under investigation himself, picking off and examining any constituent parts in a vacuum only unlocks the barest portion of the story.

As much seduced by the possibilities of images as he is a seduction artist himself, Haynes takes his fractal central conceit as an opportunity to dive into as many cinematic possibilities as he can imagine‚ÄĒdifferent stocks, different period looks, various quotations to other films. It‚Äôs overloaded, candyshop filmmaking in the best sense, and not unexpected from a filmmaker whose earlier works Poison and Velvet Goldmine operate similarly, if more hesitantly, in the same collaged space (for their part, Safe and Far From Heaven were individual drag runs sustained at feature length). What‚Äôs different here is that just about every choice, miraculously, works. In a 135-minute film constructed from so many different guises, barely a false note is hit, and there‚Äôs very little that doesn‚Äôt belong. The formal play in I‚Äôm Not There would amount to mere showiness if not tied to a project increasingly valuable for the continued viability of the cinematic medium. In the film‚Äôs final moments, Richard Gere‚Äôs Billy the Kid (‚ÄúOutlaw‚ÄĚ Dylan), on the eve of the destruction of the Shenandoah Valley to make room for a highway muses on an idea of our world as the past, present and future sitting in the same room together. If there‚Äôs one quality that cinema holds above all other arts it is this‚ÄĒthe ability to manipulate and blend temporality. By crashing different periods together between frames and within them Haynes has created a cinematic manifesto that reprioritizes this seventh art in relation to other forms, mainly its ability to encompass them all. If that weren‚Äôt enough, Haynes has also taken it upon himself to reimagine the possibilities of music montage, here as a device for tying various strands of his experimental narrative together and more cleanly elucidating character. Having some of the most recognizable popular songs of the 20th century at his disposal has only emboldened him as a director‚ÄĒhe correctly realizes the comforting, grounding potential of familiar music and uses his montages as opportunities to dive off into the unknown.

Even those with only a passing familiarity with Bob Dylan‚Äôs life and career will likely be at least peripherally aware of two things: the epochal 1966 Newport Folk Festival performance in which Dylan ‚Äúplugged in‚ÄĚ and alienated his core audience of folk fans, and probably his most famous anthem, ‚ÄúLike a Rolling Stone,‚ÄĚ also from the same period. Haynes understands this, and knows well how cinematic history is distorted and bent to accommodate crucial recognizable bits, building up to them as if they were action film spectacle. Here he plays along, constructing I‚Äôm Not There such that both reveals burst on the screen in waves of pure satisfaction. His Newport sequence is simultaneously an introduction to Cate Blanchett‚Äôs thoroughly, uncannily inhabited Dylan (here Jude Quinn), and a nod to biopic conventions (slow motion, thudding heartbeats on the soundtrack) that literally explodes in glorious catharsis. By the same token ‚ÄúLike a Rolling Stone‚ÄĚ couldn‚Äôt be more skillfully and productively withheld; audiences will undoubtedly expect it much earlier in the film. I‚Äôm Not There also stops off to look at Dylan ephemera that will be familiar to the initiated: Bob Dylan copycat folkie (young African American Marcus Carl Franklin, ‚ÄúWoody‚ÄĚ aping the songs of his elders), Bob Dylan the earnest politicized folkie (Christian Bales‚Äôs searing, brooding ‚ÄúJack Rollins‚ÄĚ), Bob Dylan the victim of a motorcycle accident, Bob Dylan the erstwhile evangelist (Bale again). Like the familiar songs, these bits of true life help to ground I‚Äôm Not There somewhat, even if these signposts often point more to the film‚Äôs creator and the workings of his mind, than they do to Dylan. And there‚Äôs probably plenty more of this material that I‚Äôm not even aware of.

As much as it‚Äôs not necessary to possess a true familiarity with Dylan‚Äôs canon to find enjoyment in I‚Äôm Not There (folks read Ulysses pleasurably without annotated guides all the time‚ÄĒa mixture of accessibility and unfolding density is the mark of a great work of art), I can only begin to imagine the riches that open up with a better grasp on the man‚Äôs life and music. Even so, in the face of such astounding intellect, the overwhelming sense is not of weight or seriousness of purpose, but of pure pleasure. I‚Äôm Not There is a blast, and after exiting, I instantly wanted to watch it again. This is the film Todd Haynes, always preternaturally talented, but chilly and precious at times, has been waiting to make. As much a summation of its director‚Äôs chameleonic cinematic abilities as it is a portrait of Bob Dylan, I‚Äôm Not There comfortably ranks amongst the best American films of the decade. And if Dylan is left fully deconstructed by the finale, the ‚Äúreal‚ÄĚ Todd Haynes has fully announced himself in all his shape-shifting glory. In the process he‚Äôs produced a vital, ecstatic work of American art that should be recognized as sharing similar importance to its idiom as the songs of Bob Dylan did for theirs.