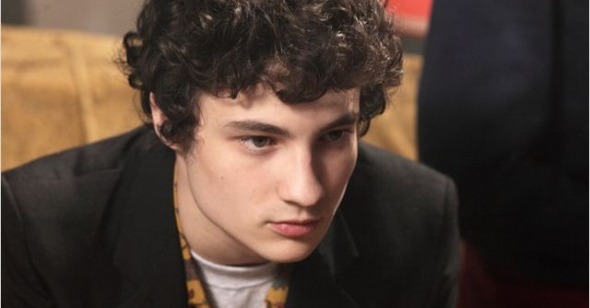 The Corners of His Mind
by Jeff Reichert

The specter of the Cold War hangs over My Golden Days, appropriate for our present moment, when Vladimir Putin is on the march, asserting Russian power aggressively in ways the world hasn’t seen since the heyday of the USSR. In Arnaud Desplechin’s latest, Paul Dédalus (Mathieu Amalric), the neurotic lovelorn hero of 1996’s My Sex Life . . . or How I Got Into an Argument, en route to Paris for the first time in years on a diplomatic pouch, is pulled aside at the airport by the authorities due to an issue with his passport. It seems there’s another Paul Dédalus, a “homonym,” with the same date and location of birth roaming the globe. Paul is brusquely frisked and taken into a dark cell lit only by a harsh fluorescent and interrogated by a dead serious André Dussollier. Is My Golden Days some kind of spy thriller?

Not exactly. As in Desplechin’s La sentinelle (1992), which used an apocryphal anecdote about Churchill and Stalin carving up Europe before Roosevelt’s arrival on the scene in Yalta to stack its deck with free-flowing paranoia, this interrogation exists only to spark Paul into a flashback of his youth. It’s also the beginning of the film’s second of three chapters (the French title Trois souvenirs de ma jeunesse does a somewhat better job than the English version of letting viewers know what they’re in for). By this point we’ve already seen Paul on the eve of leaving yet another lover in an apartment in Dushanbe and witnessed a particularly harrowing flashback. His soft voiceover—“I remember . . . I remember”— contrasts sharply with the next shot, of a harshly lit prepubescent Paul (Antoine Bui, uncannily Amalric-like with big eyes and a shock of messy brown hair) at the top of a set of stairs in the dark of night brandishing a knife at his mother and screaming at her. She, for her part, looks like some kind of succubus, eyes just as wide as Paul’s but filled with malice as opposed to terror as she advances on him.

Seconds later, their tense altercation gives way to a moment of tenderness—Paul’s younger sister, Delphine, places a blanket over him, asleep where he fell at the top of the stairs. His mother is passed out on the landing below; unleashed rage culminating in an exhausted standoff. The easy navigation of the juxtapositions—adult Paul in bed with a lover he’s about to leave; young Paul at the height of fear and anger; an intense conflict defused by sleep and capped by love—over the course of just a few minutes of screen time is textbook Desplechin. The next scene finds Paul moving away from home to live with his grandmother. His mother commits suicide not long after, crippling his father, Abel (Olivier Rabourdin), and bringing the first section of My Golden Days to a close.

The second flashback, entitled “Russia,” tells the tale of how a teenage Paul (now Quentin Dolmaire) managed to “lose” his passport, thus creating his alter ego. It’s the tense, waning days of the Cold War and Paul has agreed to use a school trip to help smuggle money and documents to a family of refuseniks in Minsk. Unlike the hallucinatory, poetic, and really quite scary first chapter of My Golden Days, “Russia” plays like the spy film the interrogation that begins it would suggest, with Paul sneaking off a guided museum tour, memorizing Russian addresses and phrases, changing costumes in a closet to look more proletarian, and nearly getting plucked by a police officer in a pedestrian tunnel. The filmmaking here is a taut delight; reminiscent of how easily Olivier Assayas grafted his techniques to the needs of the tense OPEC standoff in Carlos, Desplechin, whose woollier way with camera and editing has been mostly used thus far to cubistically chart familial and romantic disintegration, proves to excel at straight-faced genre play.

This incident has enough twists and turns to make for the story of a lifetime, but when adult Paul is first asked about a stolen passport in the interrogation room, he seems to have no memory of it. “Do you think I’m a Communist agent?” he asks angrily. When presented with the official forms relating to the “loss” of his passport all those years, ago, that sheepish Amalric/Paul grin flickers across his face—it’s all come back to him. His denial and remembrances while under questioning play not as the calculated pose of a spy, but as the segmented recollections of a segmented man piecing his life back together in a segmented film. The voiceover that cues the next, and final, chapter bears this out: “I seek shards of memories within me. I recall nothing. Everything is erased. Except three or four snippets…”

This longest section of the film concerns the most crucial period of Paul’s development, and is appropriately entitled “Esther” after the love of his life, embodied by Emmanuelle Devos in My Sex Life… as perhaps the fiercest, most idiosyncratic bundle of Gallic neuroses in nineties French cinema. Here she’s played by overripe newcomer Lou Roy-Lecollinet whose pouty lips, wide eyes, bangs, and diffident air don’t exactly add up to “pretty” or “beautiful” but who’s certainly got something, enough to attract Paul and many other men to boot. This section shows us how they met (he was a poor university student, she the younger classmate of Delphine), and it reveals that their initial rush of feeling wasn’t any less complicated than what would come later. With Paul scraping by to study anthropology in Paris and barely able to find money to secure lodging each night, much less purchase train tickets home to see his girlfriend on a regular basis, Esther repeatedly seeks solace in the arms of Paul’s friends.

It’s their origin story, but it’s also Paul’s, and he admits to Esther several years into their relationship the degree to which it made him. First love is always critical, especially in the movies, but few are the scenarists like Desplechin who plumb it deeply enough to truly turn over all the minute pleasures and pains to find how thoroughly they shape a person. During this chapter a narrator (Desplechin himself) fills in gaps in explication, so that Paul is no longer in charge of directing his own tale. Who in the throes of first love really is?

Paul and Esther love and fight, and fight and love some more. The Berlin Wall comes down. They listen to the English Beat and chain-smoke while preparing for a party at Paul’s house. They send each other letters, which are relayed via a Desplechin trademark: direct to camera. She stays with him in Paris for a brief spell and they get a glimpse of what their adult life together might be like—Esther putting a cool towel over Paul’s tired eyes, reading, sleeping and waking together in Paul’s cramped garret overlooking the Eiffel Tower. These days, for Paul, though fraught, are truly golden. As his studies come to an end, Desplechin quickens the narrative pace: Paul gets a grant to work in Dushanbe, distance temporarily ends his relationship to Esther. When he finally returns to Paris, closing the present-day loop begun at the film’s outset, he reconnects with an old friend and they fight over Esther in a bar. Some things we never leave behind.

Even though like the director’s last film, Jimmy P., My Golden Days finds Desplechin tempering his penchant for wild tonal shifts, he’s still not above the regular deployment of iris-ins, unexpected insert shots, split screens, and clashing music cues. My Golden Days may not feel as dangerous as, say, Kings and Queen (2005), but the oddly lumpy structure, with its awkward dodges and narrative feints, shows a filmmaker who can’t hem himself in entirely. This leaves My Golden Days feeling like a grab bag of ideas and material, so, in other words, a film by Arnaud Desplechin. Though its purpose is to chart the initial years of Paul’s love for Esther—for a tale of young Paul Dédalus, how could it not?—Desplechin, a storyteller always working to make sure he over-delivers for his audience, can’t allow himself to jump right to the heart of things. He’s got other stories to share, too! As in his art, so it is in most lives: we dance and dance and dance around the things in our pasts that are painful to recall and admit. Eventually, if we’re lucky, we, like Paul, recognize what it is that matters most.