NYFF: Journey to the Shore 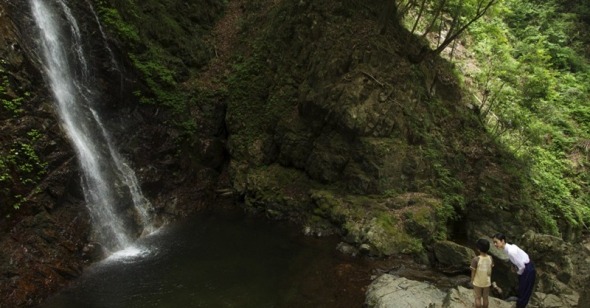 Journey to the Shore
Dir. Kiyoshi Kurosawa, Japan, no distributor

Sometimes all it takes is one simple touch to identify a familiar hand. Anyone considering Journey to the Shore who has a passing acquaintance with the work of Japanese filmmaker Kiyoshi Kurosawa (best known in the U.S. for his J-horror-adjacent policier Cure and techno-ghost tale Pulse), might, early in the film, recognize his mark. After a brief prologue that introduces his heroine, meek piano teacher Mizuki (Eri Fukatsu), as she‚Äôs being berated by her very young pupil‚Äôs mother for not pushing her daughter to progress faster, Kurosawa allows us a glimpse into Mizuki‚Äôs home life: a sterile, featureless apartment, rendered all the more drab by Kurosawa‚Äôs bleached color palette, in which she seems to live quite alone. As Mizuki makes herself a small batch of pastries, each filled with gooey black sesame paste (shades of that lonely cupcake in Bridesmaids), the camera elegantly tilts away, revealing the space over her shoulder and above her head; it‚Äôs a movement implying omniscience and that something, perhaps of the malevolent variety, might lurk just out of our view.

What‚Äôs being suggested isn‚Äôt revealed immediately‚ÄĒKurosawa‚Äôs too expert at building suspense to let us off easily. Instead, he doesn‚Äôt shift his shallow depth of field, thus the contours of Mizuki‚Äôs furniture and the color of her rug remain frustratingly indiscernible. We‚Äôre adrift from our protagonist and our vision is blurred. All of a sudden, we‚Äôre in the land of the uncanny. The next shot reveals Mizuki has an unexpected visitor: her husband, Yusuke (Tadanobu Asano), has arrived, after a three-year absence and though, according to him, his body has long ago been devoured by crabs, he seems remarkably corporeal. Mizuki meets this sudden appearance without much surprise‚ÄĒshe‚Äôs more concerned with the fact he‚Äôs wearing shoes in the house and how long it took him to return, Kurosawa‚Äôs first subtle signals about the character of their marriage. Yusuke is back to take Mizuki on a trip to meet people who treated him kindly during his years of post-death wanderings; it‚Äôs clear that there‚Äôs nothing in her life to hold onto, so she rather willingly agrees to go along.

Journey to the Shore treats this commingling of the living and dead by barely treating it at all. Mizuki can touch her dead husband and vice versa (though there seem to be some restrictions on living-dead intercourse); he can be seen in public, buy train tickets, ride buses. Yusuke‚Äôs difference is spotted from time to time‚ÄĒa child on their first train together seems fixated on his presence, and, later, a Buddhist monk in a market stops and stands stock-still at the sight of him. But, for the most part, those around him, even those who know his status, seem generally unsurprised by his reappearance, not unlike the knowingly dry handling of supernatural apparitions in Apichatpong Weerasethakul‚Äôs Uncle Boonmee Who Can Recall His Past Lives. He disappears from time to time‚ÄĒa move into the shadows of their apartment a few minutes after his return sends Mizuki into something of a panic‚ÄĒbut overall seems as solid as everyone else. As Kurosawa reveals more about their relationship, Journey to the Shore suggests that this attentive, sensitive, dead Yusuke might be a better version than the living dentist Yusuke that Mizuki once married.

As in Dickens‚Äôs A Christmas Carol, perhaps the archetypal tale of the dead coming back to affect the living, Yusuke and Mizuki make three visitations on their journey. They first stop by the home of an old man, Shimakage (Masao Komatsu), who is also dead, yet still insists on printing and delivering a small gazette to his neighbors every day. In the second, they meet a pair of restaurateurs, Jinnai (Tetsuya Chiba) and Fujie (Nozomi Muraoka) for whom Yusuke once worked as a gyoza maker, even though Mizuki notes that he was absolutely useless in the kitchen while living. Both Jinnai and Fuji are living, but when Mizuki begins playing a dusty piano left upstairs, she summons the spirit of Fujie‚Äôs sister, who died as a young girl. Last, they visit a rural farm community situated near a waterfall that‚Äôs said to be an entry point for spirits to cross over from the other side. Here, Yusuke was a revered schoolteacher giving classes to the locals on a variety of topics from Einstein to the Big Bang. Mizuki receives some advice from her dead father there, and she and Yusuke reckon with another spirit who hasn‚Äôt adjusted well to the afterlife. It‚Äôs in this village where Kurosawa‚Äôs pourous membrane between the dead and the living feels flimsiest.

At each stop, Mizuki‚Äôs appearance helps bring about a reckoning. Drunken dinner conversations with Shimakage reveal that the man harbors deep regrets about how he treated his wife; Fuji shows remorse about criticizing her young sister‚Äôs piano playing. These incidents create dramatic catharses that release the participants and allow Yusuke and Mizuki to move on to their next destination: once Shimakage has rehearsed his remorse appropriately, his guests put the exhausted, drunken man to bed, and a dramatic shift in the dim room‚Äôs lighting reveals the wall behind his headboard is covered every inch in beautiful cut-out flowers. When Mizuki awakes the next morning, she finds the quarters they‚Äôve been sharing with him have been long dilapidated. It‚Äôs one of many moments in the film where we wonder if Mizuki is really experiencing all of what we see. The question of who might be less alive‚ÄĒher or Yusuke‚ÄĒlingers as well.

Don‚Äôt be concerned if this scenario is instantly reminiscent of the long-running Jennifer Love Hewitt TV series The Ghost Whisperer, in which the actress played a clairvoyant who helped restless spirits reconcile their unfinished business on Earth and ‚Äúcross over.‚ÄĚ Any narrative acknowledgment of life as a space for accumulating regrets, many of which, by dint of human nature, will go thoroughly unresolved, carries with it a profound feeling of familiarity so that even trash like The Ghost Whisperer occasionally tugs a heartstring. Kurosawa‚Äôs take is more muted and delicate, winsome to its core, but like A Christmas Carol isn‚Äôt afraid to jolt us every now and again‚ÄĒit is a ghost story after all. Remember how frightening Pulse‚Äôs simple images of people standing and staring in dark rooms were? He trots out the same trick in Journey to the Shore, though for unnerving rather than petrifying effect.

Journey to the Shore has been unfavorably compared to Kurosawa‚Äôs more popular, more obviously scary films. Watching critics try to separate out a filmmaker‚Äôs body of work along genre lines is always dubious, especially when easy value judgments come assigned with the culling. Since he is known in this country mainly as purveyor of J-horror, violent cop dramas, and thrillers, when he steps out of that rigid framework, those films are given extra scrutiny. This impulse toward either/or processing is a shame: if one considers his eco-fables Bright Future and Charisma as much a part of his DNA as Cure, or that the deep abiding sadness and violence at the core of his domestic drama Tokyo Sonata comes from the same place as the fearful images of Pulse, the picture that emerges of Kurosawa the artist is more fascinating and multivalent. Maybe with Journey to the Shore he‚Äôs reveling in a latent tendency towards the Capraesque that‚Äôs gone unnoticed until now.

Journey to the Shore, though the schmaltziest film of his I‚Äôve seen by some margin, is not unlike other Kurosawa films in its tendency toward the schematic. To the tune of a swelling, chipper symphonic score that suggests a much more warmly romantic film, Yusuke and Mizuki trudge forward, making stop after stop on the way to the shore. There are revelations and unexpected encounters‚ÄĒMizuki confronting her husband about his affair with a woman named Tomoko, and then arranging a solo meeting with the younger, prettier, self-satisfied mistress herself‚ÄĒyet once the film‚Äôs premise is established, it falls into a rhythmic pattern. By the end, Yusuke may have crossed over, but Mizuki seems released as well‚ÄĒon their journey, she repeatedly stepped out of her comfort zone, reconciled and forgave and fell back in love with a man who hurt her deeply. To most, these eventualities might have been predicted from the film‚Äôs outset, but just because you know where it‚Äôs going doesn‚Äôt mean that there aren‚Äôt pleasures to be had along the way.