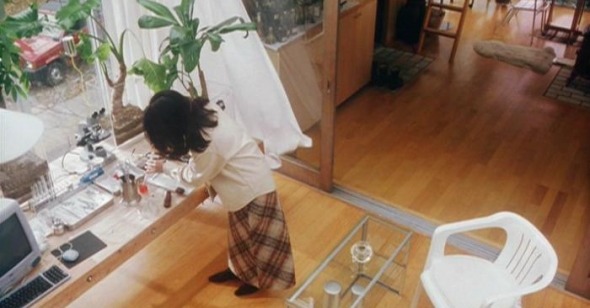 Charisma is a profoundly weird film, especially for critics (like me) who have been introduced to Kiyoshi Kurosawa as a compelling practitioner of muted, creepy horror movies through Cure, Séance, and Pulse or socially conscious Yakuza dramas Eyes of the Spider and Serpent’s Path. Working in either mode, Kurosawa’s films are laced with nuanced and thoughtful meditations on metropolitan isolation and social miasma and push the extreme limits of generic convention—insofar as they blend so many different story tropes that are traditionally mutually exclusive. As far as generic hybrids go, Charisma goes pretty far off the reservation. It welds a relationship farce onto an allegory about the environment—awkwardly, by the director’s own ambition. But I’m fond of Kurosawa, so I give him the benefit of the doubt

With the notable exception of Bright Future, Kurosawa’s cities are so desolate and bleak that you wonder why his characters don’t just get up and leave; in Charisma, someone finally does. Yabuike (the ever excellent Koji Yakusho) is a bleary, weary policeman who botches a hostage situation, leaving a member of parliament dead by the kidnapper’s hand. Yabuike’s response is renunciatory: he leaves a message with his wife saying that he “won’t be home for a while,” and ventures out into one of the woods skirting Tokyo. If the captor proves lunatic, in asking that society “restore the rules of the world” as his sole ransom condition, the spectacle Yabuike experiences in the wild is far more bizarre: three different factions, all fighting over a tree called “Charisma.” A proto-militant group tries to uproot for market sale; a botanist and her hot-for-Yabuike sister assiduously try to kill it; and a loner defends Charisma from both with vicious zeal. Almost somnambulant, Yabuike wanders through the forest, munching on hallucinogenic mushrooms, a mute and bewildered witness to it all.

One suspects that part of Yabuike’s bewilderment comes from the overwhelming parallels between the forest and the city that he left behind. The same polar opposites of good and evil are at work (if slightly less well defined), as is the same essential conundrum that precipitated his departure—a standard utilitarian argument pitting the needs of the many against the rights of the few. Saving the tree, which is poisonous to the surrounding environment, threatens to kill off all other flora in the forest. As Yabuike becomes the tree’s steward and wonders why he can’t preserve both Charisma and the forest, he threatens to revisit the same sins that forced his initial exodus. The bare bones of the plot are thus fairly schematic, but there’s enough accompanying atmospheric bizarreness to keep things interesting. The botanist’s sister has a zealous, irrational, and unrequited attachment to Yabuike—the aforementioned relationship farce—and the perpetual tripartite war over the tree is waged as if by the Keystone Cops. Yet if all this behavior seems natural, such is Kurosawa’s naturalist aesthetic and Yakusho’s even temper.

Truth be told, Charisma is probably one of Kiyoshi Kurosawa’s weakest films because, beyond a few obvious allegories, it borders on incomprehensibility, skirting that precarious boundary between barely decipherable and just plain cryptic. Yet Kurosawa films his tale with an ingenuousness and commitment to its own supremely strange universe that also makes it strangely compelling.

Yabuike gives himself over to the forest’s green world logic and structure, not unfamiliar to those who have studied Elizabethan plays like A Midsummer Night’s Dream and Twelfth Night .In those comedies, the real world is fraught with problems that can only be resolved by temporary flight to the green world (usually a forest) with its own (usually mystical) rules. Once the problems are satisfactorily amended, the plot allows a return back to reality. However, Kurosawa obliterates easy dichotomies (city/country, naturalist/rationalist, etc.) because the forest is less virgin wilderness than the municipal world gone to seed. Piles of earthy decaying refuse are piled up inside the militant compound, while the loner’s dwelling (which looks like a child’s indoor playground) is in decay, with muddy floors and wind whipping through its myriad broken windows. Small wonder that Yabuike doesn’t find the peace he sought in the wilderness. But when Yabuike makes his return to Tokyo, there is no return to the real world, for the rules of the forest have taken hold everywhere.