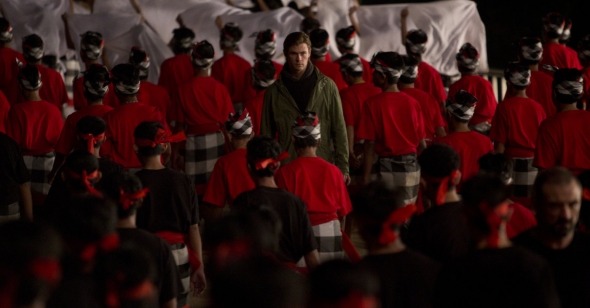 The Fog of Cyberwar
By Keith Uhlich

Stanley Kubrick waited almost two hours to take us ‚Äúbeyond the infinite‚Äù in 2001: A Space Odyssey. Within the first few minutes of Michael Mann‚Äôs sublime new cyberthriller Blackhat, we‚Äôve traversed two cosmos. First the eerily silent space above planet Earth: our little blue orb is visualized as a pulsating web of electronic signals, absent physical borders. Then, after a quick descent, into a universe within‚Äîthe tangle of cables, cooling fans, and microchips in the mainframe of a Hong Kong power plant. The digitally assisted camera moves ever deeper into the circuitry (worlds inside worlds), a thrillingly wordless journey through a supercomputer vortex that climaxes in a destructive laser light show as the central processor is overtaken by malware. A few moments later, one of the power plant towers explodes, the first step in a master plan by a mysterious ‚Äúblackhat‚Äù hacker out to wreak virtual and actual havoc.

This sequence is high up on the list of Mann opening salvos, topped only by the Sam Cooke‚Äìscored jogging montage of Ali (2001) and the disorienting smash-cut-into-the-nightclub that kicks off the theatrical cut of Miami Vice (2006). And Blackhat is very much in the vein of the filmmaker‚Äôs elusive post-Insider style, with its alternately sleek and smeary hi-def palette, terse-bordering-on-narcotized performances, and glancing (if not downright indifferent) approach to narrative. Even by these standards Blackhat is a defiantly odd duck, favoring impression and sensation over dramaturgy to such a degree that Mann seems, more than ever, closer to the idiosyncrasies of niche art house fare than the easy pleasures of the mainstream multiplex.

That‚Äôs not to say he isn‚Äôt courting his pop-audience. Mann has, after all, cast that great Asgardian warrior Thor in the lead role. First seen lounging behind bars (he‚Äôs serving a thirteen-year prison sentence), genius computer hacker Nicholas Hathaway (Chris Hemsworth) resembles a sentient slab of beef with Zen master tendencies. There‚Äôs a terrific scene early on in which he‚Äôs roughed up by some guards and thrown into a cell, the camera holding on him as he deep-breathes, adjusts to the confined space, then drops for a round of push-ups. A quintessential Mann protagonist, in other words‚Äîadapting to the moment as the moment requires, unburdened by any past attachments or future prospects.

Hathaway is given something of a new lease on life, however, when he‚Äôs recruited to a covert task force led by American operative Carol Barrett (Viola Davis) and Chinese military man Chen Dawai (Leehom Wang), the latter a former colleague of Hathaway‚Äôs. Turns out the blackhat hacker is using an evolved variation on some code Hathaway wrote several years before (one of the movie‚Äôs many subtexts is the question of authorship in an increasingly hi-tech world), so his insights are especially valuable in what will turn out to be a globe-hopping quest from Los Angeles to Hong Kong to Kuala Lumpur to Jakarta. Of course there‚Äôs a sequence in which Hathaway brusquely negotiates the conditions of his prison sentence commutation (‚ÄúThose are the terms!‚Äù he barks at an arrogant middleman way out of his league), but he still has to wear an ankle-bracelet so he can be tracked at all times by government agent Mark Jessup (Holt McCallany, making the most of a mostly dialogue-free role as the task force‚Äôs resident crackshot badass).

There‚Äôs also the matter of Lien Chen (Wei Tang), Chen Dawai‚Äôs sister, who Hathaway clearly has eyes for‚Äîand she for him. Mann has always had an allegorist‚Äôs view of male-female relationships, but there‚Äôs something especially fairy-tale fanciful about the way Lien Chen and Hathaway fall into each other‚Äôs arms. They recall the star-crossed lovers played by Scott Glenn and Alberta Watson in Mann‚Äôs much-maligned horror-romance The Keep (1983), who required little more than a glance between them before hitting the sheets. There, the attraction had a truly supernatural element. Here, it‚Äôs much more mysterious, caught up, as is just about everything people say or do, in the ceaseless flow of a world ruled by technology. Where machines lead, bodies follow, and not necessarily in a straight line.

Mann‚Äôs narrative shorthand surely seems laughable to those for whom his distinctively digital images (here captured by cinematographer Stuart Dryburgh, whom Mann worked with on the pilot episode of HBO‚Äôs Luck) and his belief in a kind of mythic serendipity rankle rather than captivate. There‚Äôs a large degree to which Blackhat is a for-fans-only affair, pushing the digital noise to startling extremes (one angle will be hi-res crisp, the next one slathered in blown-out pixels), and lifting swatches of dialogue and/or scenes from Mann movies past. When Hathaway has his ‚Äúa-ha!‚Äù moment about the blackhat‚Äôs plans, he recites, almost word-for-word, the same profane litany as William Petersen during an analogous scene in Manhunter (1986).

I don‚Äôt think this is a matter of Mann repeating himself. The more Blackhat unspools, the more it appears the filmmaker is consciously reworking the tropes he knows and is known for (the screenplay is by Morgan Davis Foehl, an admitted Mann devotee), setting them up only to frustrate expectation and conventional satisfaction. Hathaway has a backstory that he confesses to Lien Chen after their first night together, but Mann films it as a half-heard anecdote in a longer, impressionistic montage. The words don‚Äôt matter, and where Hathaway is from isn‚Äôt the point. As that earlier scene in jail suggests, he only ever exists in the present moment and acclimates accordingly.

So too Blackhat, which never settles into a groove from which it doesn‚Äôt quickly veer off. Performance-wise this is one of Mann‚Äôs strangest movies, cultivating a dead-air hesitancy in almost every dialogue exchange, the likes of which I haven‚Äôt experienced since Kubrick‚Äôs Eyes Wide Shut (1999). At one point, Viola Davis separates the tail end of a kiss-off line into . . . three . . . emphatic . . . inflections. In the moment, it‚Äôs bizarre as hell. In the full context of the movie, it feels just right, an alien rhythm of speech to complement the film‚Äôs equally alien ambience. There are images here‚Äîlike one of a desolate airport runway in which Hemsworth‚Äôs head hovers in extreme close-up on the side of the frame and another in which a plane rises above the horizon line into perfect alignment with a night-sky star‚Äîthat have the quality of direct downloads from the id. A violent shootout in a shipping-container yard seems sculpturally composed, the gunmen placed in and around the various metallic and concrete structures like life-models in a museum piece. And there‚Äôs a breathtaking scene about three-quarters of the way through (I‚Äôll only say it begins with an exploding car) that effectively shatters the movie we thought we were watching, pushing it further and further into the realm of avant-garde abstraction.

What keeps the m√©lange compelling is the sense of transience that Mann has been nurturing in his recent work. His fascination with characters who have no nation beyond their own immediate selves reaches a kind of emblematic apotheosis with Hathaway and Lien Chen, who spend a good portion of the last part of Blackhat in total silence‚Äîplotting, preparing, waiting. They‚Äôre out for revenge against the blackhat hacker, but Mann makes sure to put their bloodlust in perspective, once again reveling in all those moments of dead-air and downtime during which the retaliatory fervor subsides. When the confrontation with the big bad finally occurs, Mann mounts it against a sprawling recreation of Nyepi, an annual Balinese celebration during which Hindu worshippers perform exorcising rituals (culminating in a literal ‚ÄúDay of Silence‚Äù) as a way of asking for forgiveness and preserving cosmic balance. Hathaway, in an especially inspired stroke of staging, constantly moves against the flow of worshippers.

With his recent work, Mann has been charting how people survive in a world off its axis‚Äîor at least one that is moving so fast (where even a single keystroke can cause untold chaos) that a set moral code, the sacred center of many a Mann protagonist, can‚Äôt be maintained. Can anyone ever truly escape the scrutiny of the culture of surveillance? And what is lost when personal philosophy becomes slave to the malleable moment? Blackhat‚Äôs ambivalent final passage, at once exhilarating and grim, suggests that the only option may be to cash out completely. (Basically destroy the paper trail and slo-mo strut your way into a fade-to-white.) But even there, in that blinding space on the far edge of existence, someone‚Äôs always watching.