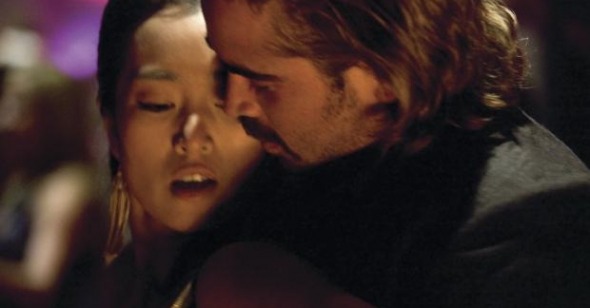 A blind woman, guided by a veterinarian, reaches out to touch a sedated tiger lying on a metal table. She moves her hand from its side up its neck then down to its mouth, where she pulls back its lip to expose a row of handsome, lethal teeth. Her wide and vacant eyes bloom with surprise, looking to an elsewhere she does not see. She rests her arm in front of the tiger’s open mouth; the vet says, “It’s warm,” and she gasps with a smile. Her discovery is watched from another remove: a tall, retiring man stands at a distance against the wall, almost in a corner, behind the scene. He is a serial killer. He looks sedated, too, but not quite at ease, despite appearing to share in the catharsis of this event. As the blind woman tears, listening to the tiger’s heartbeat, the killer’s harelip mouth hangs open and his head falls back, eyes closed.

This minor masterpiece of direction and performance, happens roughly two-thirds into Michael Mann’s 1986 feature, Manhunter. The blind woman, Reba (Joan Allen), and the serial killer, Dollarhyde (Tom Noonan) met in the scene immediately prior, when he offered a ride home and proposed this “surprise” encounter. Since we have witnessed him torture first hand and seen the aftermath of his murders, this proposal, however tender, plays as suspect, charging the scene with anxiety, a palpation made explicit on the soundtrack when we join Reba to hear, however faint, the tiger’s heart. Dollarhyde’s rapture (or is it pain? a simple release?), reflects Reba’s, and our own. It’s conflicting, like Reba’s synesthetic bliss: it blends sense. The affective force of this moment highlights an already exciting, sensual film, and may help to define the work of Michael Mann. Indeed, one might argue that Mann has tried, in twenty years of filmmaking between Manhunter and Miami Vice, to recapture the tactility of this scene through the aesthetic and formal preoccupations that have come to define his always evolving, consistently dynamic cinema: a camera angled off-center, often out of focus, at the margins of the image; an increasingly elliptical (faster) editing; a vibrant color palate pitching cool (although often neon bright) blues and greens against washes of amber and purple; an enthusiasm for dilated lenses in extreme focal lengths, and for keeping his recent digital video compositions grained and supple.

While Manhunter features instances of diegetic video throughout (home video evidence looked at again and again), it wasn’t until 2001’s Ali that Mann used video as an aesthetic and formal technique (lending certain fight sequences a sense of speed and urgency). His next feature, 2004’s Collateral, was shot almost entirely on high-definition digital video, which can be seen as a test run for 2006’s all-digital Miami Vice. Mann says he employed video on Collateral because it made shooting easier, but his film tells a different story. Digital may very well speed up a production and afford more mobility, but looking at Mann’s most recent work one realizes he’s not after economic efficiency: the coverage is total, exhaustive, some say indulgent, and Miami Vice ran over budget past $150 million. Nor does he shoot this way simply because it looks cool. Mann does not move his (often handheld) camera for the same aesthetic reasons as always on-the-go Paul Greengrass, who means to splinter space; despite all that shattered glass in Collateral and those brutal shoot outs in Miami Vice, Mann’s cinema is after a boundlessness, not a fragmentation. Video affords Mann an endless skyline, where things collapse and collide, day or night. Late in Miami Vice, preparing for the climax, Jaime Foxx’s Ricardo Tubbs asks his partner, Colin Farrell’s Sonny Crockett, “So, fabricated identity, and what’s really up, collapses [sic] into one frame—you ready for that on this one?” Sure enough, that’s what the whole movie is about: intersections across invisible boundaries. And that’s what film is: an invisible collapse of the ineluctable present’s invisible boundaries. So, why go digital?

Mann consistently structures films around rather simple, binary relationships (between characters) designed to explore what separates men, where to locate right and wrong, up and down—and their inevitable overlap. Characters in Mann’s films live in that overlap, negotiating the arbitrary lines drawn by laws and ethics, by the practice of everyday living. His films work best when he teases quiet performances from his actors and hints at themes by framing them with his camera, not his dialogue. With a penchant for going big, Mann excels when confined (either by means or by design), since, as much as he tends to abandon plot, his films still rely on narrative, or its semblance, and structural sleight of hand is easier to trace (swallow?) on a small scale. It’s fitting that Collateral is strongest when its setting is contained: most of the picture consists of Max (Jaime Foxx) driving Vincent (Tom Cruise) around Los Angeles talking. For all the ground the film covers, the things that matter most to this character-heavy interplay of ethics happen in Max’s cab. But the camera keeps moving, hardly restricted, looking out the windows, then through the panes of glass separating the front and back of the vehicle, layering the space between and around the actors with that tactile tension Mann achieves via editing and plays of light: as much as video extends night’s visibility, it can also compact it.

Odd, then, that Miami Vice looks big and feels small. Like its predecessor, Vice moves all over the map but never disperses: liquids run through it, linking the far flung locales, the flux of bodies. The water motif is made rather explicit in the so-called director’s cut DVD release (Mann says he has final cut on every film so every release is a “director’s cut”), where the camera begins under the surface and bubbles up to catch sight of Sonny and Rico’s boat racing past the camera in slow motion. It’s a gorgeous shot and sequence, if less striking than the theatrical opening: a slam-cut from a silent, black screen to an unknown woman dancing, backlit by an eruption of projected digital blur, providing a field of contrast for the woman’s hard, black, constantly shifting (like liquid) contours to move over. The whole opening sting sequence is characterized by this urgent dynamic, this insistent movement of bodies in space. One might see the entire film in miniature in this club: each body pushing its neighbor, everything tactile and in flux, compacted in Mann’s digital camera, speed not a byproduct of the mise-en-scène but a fact of life in this world of collapsed boundaries/spaces/timelines. Miami Vice is, by nature, a fast film. Mann rarely pauses and when he does it’s not for exposition—it’s to look outside the story (as if there is one) and its relentless movement (if not forward then sideways; never backwards). The most obvious moment of reflection comes early when Sonny looks out a window at the ocean and the sound drowns out for only one line of dialogue. Even rest ends quickly here. Where Collateral draws a single night out, stretching time forward, Miami Vice says “Time is luck” and stretches time in every direction, forcing viewers to play catch-up from the get go. (The “director’s cut” compromises the film’s argument by slowing things down.) The frame is collapsed not strictly in the climax but immediately, from the first shot—the field of the dancer and the splay of light behind her made one image—because of digital video’s omnivorous capabilities to devour light.

Had Mann shot Collateral and Miami Vice only on film, in 35mm, a lot of light would have been lost. Not that his night photography before lacked depth or that sense of the tactile (see the lens flares of Heat, the neon of The Insider); rather, digital amplifies and extends Mann’s vision from its early crispness. Dominated by white, Manhunter is all reflections and projections: its tactility comes from Mann’s manipulation of focus and editing, as in the scene with the tiger. The reveal of Dollarhyde watching rapt behind Reba begins with a blurry close up of Reba’s hair and as she passes out of frame to the left, Dollarhyde emerges from her wake, his face an impression on the scene equal to the tiger’s teeth. Earlier in the picture there is a subjective point of view of some grass that, as it’s pushed out of focus, looks like a green star field, the color itself lending the image its weight. Mann’s digital works push colors to new cinematic hues (colors are different speeds of light after all). He leaves the image grainy so Miami Vice’s purple clouds hang heavy across the screen, so Collateral’s amber view of distant smoke stacks stink with waste. In his last two films, Mann has used video to enrich and make palpable his earlier works’ angular sheen. The familiar is foreign, the margin is focused, and action takes on a new weight in tandem with its new speed.