The Case of the Grinning Cat 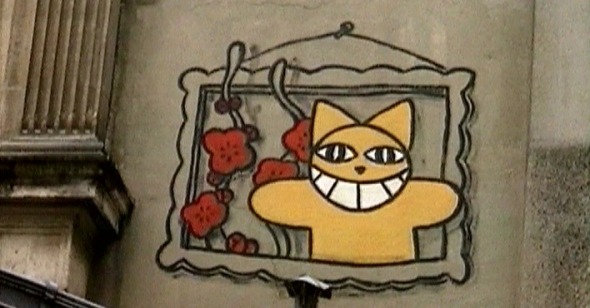 These disparate events are canalized by Marker's mind, finely calibrated as always to detect obscure frequencies, omens, and so on, creating a baggy personal commentary on the resurgence of street-level activism in contemporary France. Our companion through this process is the film's titular feline, a yellow graffiti icon—name of M. Chat—who, courtesy of some anonymous artist(s), began to manifest his Cheshire smile (benevolent, muses Marker) on the chimneys, walls, streets, and rallies of Paris, in the months after 9/11.

The pleasure one takes from a Chris Marker film is essentially the pleasure found in keeping his company, and here, as ever, he’s an amusing monologist. But his obsessions in The Case of the Grinning Cat are not my own—I don't think I've ever found poignancy in a piece of “street art,” and M. Chat lacks even the lovely poetic pretense of May '68’s opaque sloganeering (“Sous les pavés, la plage !”); Marker’s following the instructions to join up with a "flash mob,” which opens the film, doesn’t seem the ebullient manifestation of the “new culture,” to which he has dedicated his film, but rather as an embarrassing reminder of a mercifully short-lived “Style”-section phenomenon. And as Marker quotes Spanish Civil War partisan La Pasionaria (“They took the cities, but we had better songs”), I only see this new generation of protesters’ aesthetic poverty.

Though Marker’s narration isn’t at its most spry here—in top form, his ideas ripple like a crazily complex setup of dominos—he does get at some shrewd stuff. Though clearly simpatico with the marchers of the Left, this veteran radical stays aloof as a cat, with them but not quite among them. He’s best when addressing this millennium’s preponderance of fatuous historical syllogisms on both sides of the ideological divide—from Bush’s likening of Saddam Hussein to Adolf Hitler, to French Leftists plugging PM Jean-Pierre Raffarin’s name into a Vichy-era resistance tune in place of Phillippe Petain’s. Marker, 85 years old, has lived through Hitler and Petain, and can call bullshit with authority: “It's a great asset in life not to know what you're talking about,” his film sighs. And you can wonder: does that arbitrary “flash mob” opening invite a comparison to the sudden, general faddishness of activism? (Flash mobbing creator Bill Wasik has claimed, after the fact, that the whole thing was an experiment in “hipster” groupthink. Sure, buddy.) Whatever the case, Marker’s artistry is in always leaving a trail of questions in his wake.

The Case of the Grinning Cat screens alongside five larkish Marker shorts produced between 1988 and 2004, sketches of the animal kingdom’s little idiosyncrasies: a catalog of owl species pivoting their heads; an elephant tromping in circles, performing an inscrutable ritual of dust-flinging. They’re silly, unpretentious little things that a five-year old would enjoy: what can I say? I like them a lot.