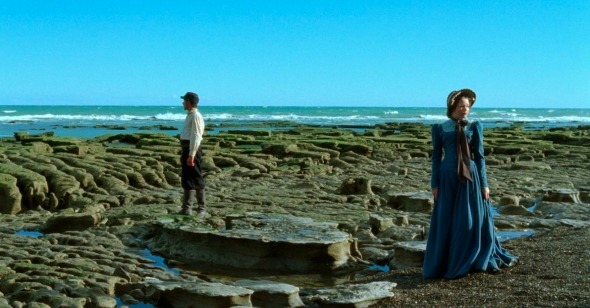 Map of the World
by Leo Goldsmith

As the absurdly long string of country names above indicates, the films of Lisandro Alonso are becoming increasingly global in their support networks and production credits, even as they remain consistent and mostly local in setting and narrative scope. Not that Alonso's cinema has ever been especially provincial—he's been drawing on international funding since his second feature, 2004’s Los muertos. But with Jauja Alonso follows the ever-widening orbit his films have been tracing even further, nudging his trademark concerns away from the largely observational, vaguely romantic cinema of his earlier work into something considerably more expansive, playful, even supernatural.

Each of Alonso's films so far has narrated a journey of some kind, and in mapping these routes from one film to another one finds a distinct progression. His first two films chart fairly simple paths: La Libertad wends a tight circuit through the wilderness, into a village, and back to its subject's home ground; Los muertos follows its subject's lengthy homeward journey, tracking languidly along the river and deep into uncharted territory. After that film, Alonso's cartographies became more fractured. Fantasma is a mostly interior film that transforms the halls and stairways of Buenos Aires’ Teatro San Martín into a labyrinth. And while Alonso's last film before this one, Liverpool, takes place largely outside again, its trajectory is more oblique still, connecting the hull of a container ship, the snowy landscapes of Tierra del Fuego, and the tiny social cluster of a remote village. The formal innovation in this last film seems to have provided Alonso with an itinerary for the journey ahead: neither circular nor linear, Liverpool's structure was tangential, Y-shaped, trailing one character for an hour, then veering off into the narrative of another. Even its title—subtly emblazoned on a keychain, a banal but important keepsake—hints at a new direction for Alonso's films, one that points beyond their usual brute-realist concerns for man, nature, and duration.

The route traced by Jauja scrambles these lines—and the audience’s expectations—entirely, following a logic that feels wholly new to Alonso’s cinema. Here, his style makes room for more elements, including a Hollywood actor, period costuming, a little broad comedy, and even intimations of the supernatural. In this regard, though the film essentially replicates the man-in-nature set-up of his earlier work, its only real precursors are those brief, dizzying moments in La Libertad and Los muertos in which the camera takes flight, losing its grounding in a blur of movement that seems at once aligned with the protagonist’s subjectivity and disembodied, beyond the human. That Alonso achieves this with an unwaveringly stationary camera (thanks to Aki Kaurismäki’s frequent cinematographer Timo Salminen) makes Jauja all the more remarkable and curious an entry in his filmography, one that somehow both critically reappraises his earlier films and transposes them into the register of myth.

Based upon a twenty-page script cowritten with the poet, journalist, and novelist Fabián Casas, the film begins with an epigraph explaining, however unhelpfully, its title: Jauja, we are told, is a mythological land of “abundance and happiness,” a sort of El Dorado whose obscure location and legendary riches European settlers sought in vain. It may or may not be useful to know that Jauja is, in fact, a real city in Peru, that its hospitable climate served as a kind of Land of Cockaigne for Spanish conquistadores who turned up there in the sixteenth century, or that it also was the setting for the Tintin adventure Prisoners of the Sun, albeit rendered francophonically as “Jauga.” It might also be telling that, according to Alonso, it was a place mentioned by the film’s star, producer, and composer Viggo Mortensen when the production team was scrambling for a title in time for its Cannes premiere. Whatever its significance, Jauja the place is a purely imaginary one, a state of mind, and soon, as the film eventually suggests, the location of a fairy tale.

But this isn’t immediately apparent: at the outset, the film’s location is stunningly beautiful and historically familiar. Shot in Northern Patagonia and set in the late nineteenth century, Jauja quickly sketches a place and time amid the grand, genocidal Conquest of the Desert, orchestrated by General Julio Argentino Roca to tame the Argentine wilderness. Here we find Mortensen’s character, Captain Gunnar Dinesen, a Danish soldier and prospector of some indeterminate variety, who has ventured afield with his 15-year-old daughter, Ingeborg, on an unexplained expedition-cum-business venture. Despite the grandeur of the landscape—an azure coastline and a silver and gold shrubland, part-lunar landscape and part-English moor, dotted with lichen-laced crags—Dinesen and his daughter seem emphatically nonplussed, even a little bored, and at the outset of the film sit languidly discussing the possibility of getting a dog once back in Denmark. Feeling decidedly out of place, the two seem to be whiling away the last days of their trip with little to amuse them and (seemingly) no friendly souls among the troop of soldiers who have followed them. To make matters more inhospitable, this crew—referred to more often than actually seen—is commanded by the comically unsavory Pittaluga, whom we first encounter jerking off in a tidal pool, and who then formally requests from Dinesen a date with his daughter. Appalled, Dinesen warns Ingeborg to stay away from the locals, little suspecting that she’s already made friends with Pittaluga’s sunburnt, scraggy-bearded assistant Corto, with whom she soon flees across the treacherous Patagonian steppes.

This initiates the film’s central action: Dinesen’s tracking of Ingeborg across the desert, a task he undertakes alone, despite Pittaluga’s warnings. With its romantic imagery and the Scandinavian roots of its protagonist, the film is curiously reminiscent of silent Victor Sjöström adventures like Terje Vigen and The Outlaw and His Wife—tales of solitary masculinity set against nature’s raw ferocity. Mortensen’s contribution here is considerable and surprising, not only in his rather famed multilingualism—he’s fluent in Spanish and Danish, which he speaks here in a slightly phlegmatic tone of fatherly exasperation and haut-bourgeois inconvenience—but in his somewhat ungainly physicality, which has him lurching about the Argentine hinterlands in an inelegant garb of a heavy regimental coat, knee-high leather riding boots, awkwardly dangling saber, and golden pashmina.

Of course, as cinematic references go, the film also seems indebted to John Ford’s The Searchers, especially once it becomes apparent that Ingeborg has fallen into the hands of local Querandí—or “coconut heads,” as Pittaluga calls them. (To Dinesen’s weak bid for crosscultural understanding between Europeans and savages, Pittaluga responds, “We don't need to understand them. We need to kill them.”) To further root the film in the context of colonization and conquest, the film offers suggestive dialogue about a certain Zuluaga, a Kurtz-like military leader who has gone native and may be wandering the desert dressed as a woman, and images of primitive totems and the remnants of a ritual sacrifice.

Despite these hints—including a glimpse of La Libertad’s Misael Saavedramade up as an indigenous warrior—Alonso’s suggestions of colonial histories are light, possibly even amounting to a red herring. The same might be said of the film’s most evident stylistic feature: its boxy 4:3 aspect ratio (itself a rejection of The Searchers' Cinemascope panoramas) with the rounded corners reminiscent of a late-nineteenth century photograph. This unusual framing—bevelled edges which, for photographs, allowed them to be more easily slipped into a sleeve or album—further reinforces the film’s storybook timbre, and its vivid color almost recalls the tinting of an old lantern slide: the soldiers’ vermilion pants, green algae-carpeted rocks, and Ingeborg’s cerulean frock. Jauja, then, coyly harkens back even further than classical Hollywood or silent cinema, and to pre-cinematic attractions like the panorama and early landscape photography.

Even so, Alonso’s film uses these references more to destabilize the film rather than to shore up its romantic depiction of man and nature. Similarly, while Salminen’s camera tends to frame Mortensen isolated against the landscape, he’s also increasingly swallowed up by it. (“The desert devours anything,” Pittaluga tells Dinesen.) Gradually, Jauja drifts into a hallucinatory rather than heroic zone, losing any consistent directional logic, just as Dinesen loses his bearings. And on the soundtrack, a relentless ambience of wind, reeds, and insect-whirr is only occasionally supplemented by a few spare interstellar piano-mellotron-guitar musings (composed by Mortensen along with the guitarist Buckethead, his collaborator on no fewer than ten of his seventeen albums). This monotonic consistency creates a woozy headspace, making any sudden, human-made noises—the eruption of gunfire, the blood-gurgle of a dying man, the snap of Dinesen’s saber in its sheath—stand out against an otherwise indifferent soundscape.

With the film’s final 180 turn—a narrative trap-door too wonderfully baffling to explain (or spoil) here—it finally becomes clear that we are in the realm of the mythological. And Alonso’s hidden intentions come into focus, too, suggesting that the earlier alignment of his cinema with taciturn macho types has been fundamentally upended, giving way to a more critical position, if not precisely a more “feminine” one. Here, as in a number of instances in Alonso’s films, an innocuous object proves richly symbolic: a wooden toy soldier found in the wild, lost, abandoned, and utterly out of place, serves not only as a curious keepsake of a half-remembered world, but as a link between people, spaces, and times, much like the little plastic soccer player in Los muertos. That it’s both a child's toy and a facsimile of a distinctly male archetype is crucial as well. Alonso is often taken to be uncritical of his film’s male characters, but Dinesen is almost tragicomic, a plaything of supernatural forces.

Or perhaps of more banal ones? After all, just as Liverpool becomes seemingly bored with its male protagonist and veers its attention to his daughter, Jauja might well be more about Ingeborg than her somewhat lumbering dad, Viggo's charisma notwithstanding. Played with quiet complexity by Viilbjork Mallin Agger, Ingeborg may have considerable more control over the narrative than her coquettish request for a puppy may suggest, a possibility hinted at early on in her bold desire for a gangly young man with whom she doesn’t even share a language. What seems like the formula of the classic damsel in distress—or, worse, the damsel in danger of being mauled by savages—finally gives way to a new story, and the film proposes something like a feminine escape velocity for Alonso’s characteristically male-driven narratives. In this regard, there are many ways one can take the film’s final, repeated question: “What is it that makes a life function and move forward?” While Dinesen perambulates the romantic Argentine landscape, Ingeborg traverses at least one entirely different terrain, staking out new territory and, for Alonso perhaps, pointing out the way ahead.