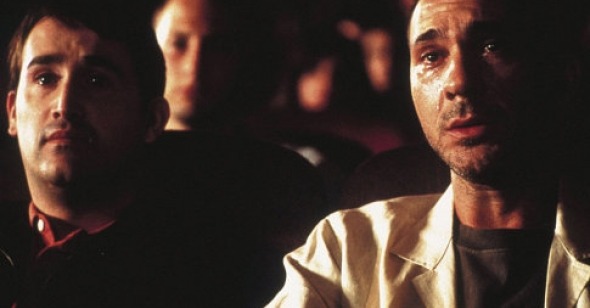 Viva Pedro: Talk to Her

Funny that the current standard critical line about Almodóvar seems to be that the Spanish auteur’s subversive streak has been increasingly nullified in recent years thanks to his embrace by the art-house mainstream; that his once Byzantine contraptions simply reeked of outré sexuality and playful meta-critique, whereas now he condescends to the blue-haired crowd in a desperate plea for palatability. So then judging by two of his most recent films, the following subject matter can be classified as appealing to the “old lady demographic”: transsexuality, pedophilia, necrophilia, and gobs of gay sex. So what’s all this about? Is this common offensive tactic, admittedly one used from non-mainstream press, simply contrarianism or the automatic posturing the critic assumes once a fringe-dweller has gone legit? I think it’s something trickier, something more caught up in aesthetic; by the time All About My Mother, and its utterly pristine follow-up, Talk to Her, were released, Almodóvar had achieved an unprecedented control over his craft, which in turn created some form of artistic tranquility. Subject matter hasn’t changed much for Almodóvar (Bad Education, with its loop-de-loop high-concept meta-trickery and incessant in flagrante homo-delicto is the most obvious sign that things are still very much in Pedro-land), but middle-age has sharpened his visual and emotional instincts to a fine point. What once was raw now seems precise; but rather than bemoan such elegance, I would venture that All About My Mother, and certainly Talk to Her, as well as passages of Bad Education and Volver, have the ability to cut deeper, burrow at terrifying truths with more wisdom and alacrity.

But only Talk to Her (and most of All About My Mother) manages to bypass all the possible snags of the slightly overdetermined Almodóvar shtick to become truly intoxicating. It’s an odd contradiction of a movie: Immaculate in its debauchery and tender in its grotesquerie. So much happens, so quickly, yet so quietly in Talk to Her, that it almost requires two or three viewings to space out your emotions properly. (Bad Education, conversely, reveals itself as a precarious structural exercise on subsequent return visits.) What the film is “about” is much less the big themes usually tossed around upon discussing it—Communication, Masculinity, etc—and what sets it apart from his other films is not so much its focus on male protagonists as opposed to female (who here are literally reduced to comatose ciphers). It’s more concerned with the moments in between, the things not said, the power of tears over words—ironic considering that Almodóvar’s films are notoriously loud, chatty, and spangled with verbal and visual sequins. There’s a deep well of compassion in Talk to Her, but its tides often register as mere ripples. Javier Camara’s performance as the nurse Benigno Martin is the most oft cited character, as well as the most sensational, yet Dario Grandinetti’s crying-prone Marco Zuluaga is not just Talk to Her’s emotional anchor; he’s the whole point. Much is made of Marco’s reserve in the film—the Spanish characters are fascinated by this Argentinean’s emotional remove; Almodóvar counters by showing his goodness, sensitivity, and on-his-sleeve emotions.

Benigno’s obsession with the gorgeous ballet dancer Alicia (Leonor Watling, so enchanting and delicate and independent that she seems to be in more of the film than she actually is) makes for the film’s most intricate structures and visual idiosyncrasies, but it’s Zuluaga’s moist purity and dewy empathy that pushes Talk to Her into the realm of the spiritual. Much remains unspoken in Talk to Her, those truths that men often can’t bring themselves to discuss, yet Almodóvar translates those muffled male murmurings to cinematic expression. With these two fragile men there are no tricks or reversals: Just as our fears that the male nurse might be sexually dangerous, or even psychologically disturbed, are validated, our faith in the justness and purity of Marco’s intentions (all caught up in his shortcomings as lover though they might be) is rewarded. The two meet inauspiciously when Marco’s striking (and strikingly masculine) toreador girlfriend, Lydia, is gored in the ring, and she is admitted to Benigno’s hospital care unit. Benigno, meanwhile, takes a special pleasure in caring for the equally comatose Alicia.

Almodóvar shoots the bull’s attack from a distance; Lydia, like Alicia, is objectified as something lovely yet unattainable, an odd, almost alienating switch for Almodóvar, who normally portrayed women as sexual beings only so far as they are able to attain a power position (even if it comes from struggle, as in Tie Me Up! Tie Me Down!); otherwise they are strong and in control, even when spiraling out of it. Men on the other hand, come with all the attendant psychological damage and irrationality most straight male filmmakers associate with their opposite sex. (See the succession of fucked-up guys in Bad Education, or, rather, see Law of Desire, in which Almodóvar makes quite an erotic show of Antonio Banderas’s luscious femme fatale-ish boytoy, who really brings down the house.) So, to even further take away the women’s voices in Talk to Her inevitably struck some as a self-defeating move on Almodóvar’s part. Yet what this brings is a surprising calm, a chance to focus on those moments elided in his other films. In other words, if men in Almodóvar equal empty space, then Talk to Her is a film made up of empty spaces.

Filling those empty spaces are sequences that flirt with outrageousness yet ultimately find some sort of solace in them. (It acknowledges the fabulousness, and sadness, of everyday living.) These include the Pina Bausch dance numbers that bookend the film, with their simultaneously distanced and overwhelmingly emotional modern technique; the moment terrorized by the threat of a snake loose inside a living room, which is kept offscreen; and mostly, the interjection of the utterly mesmerizing, surprisingly complete black-and-white silent short “Shrinking Lover,” which Benigno saw in his off-hours and is describing blow-by-blow for the eternally listening (or is she?) Alicia, which serves as the perfect microcosm and emotional counterpoint to the film proper. It’s in this final sequence where Almodóvar most asserts his vision: sex (here heterosexual but completely divorced from normalcy) painted on a grand canvas, a gigantic rubber vagina in which a tiny man, rapidly decreasing in size due to an elixir, can literally disappear, envelop himself in silence and retreat into ecstasy. A promise of eternal silence.