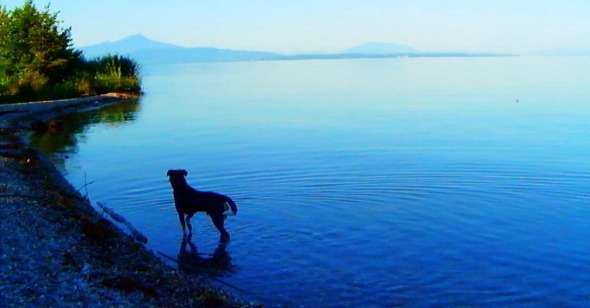 What we’re looking at in a Jean-Luc Godard film often raises the more difficult question of what we’re looking for. Often we’re looking inescapably, uncomfortably directly at the thing, which is not the thing. A central contradiction in Godard’s work, especially his post-sixties films, seems to be that we’re receiving information in a very direct manner, but that what we’re seeing is entirely illusory in a basic narrative sense. This division seems more than a cinematic trick, but rather intended as a schizophrenic condition of the modern age. When watching films like Nouvelle vague, In Praise of Love, or Film socialism we may feel like we’re divided into two people simultaneously: one who must be immersed in the world of the film and another who must keep an evaluative distance from it. It produces something like a perceptual psychotic split. This is perhaps why his choice to make his latest film, Goodbye to Language, in 3D seems such a natural one. The stereoscopic glasses further divide us, splitting our perception literally between our left and right eyes.

When we watch a 3D film, we feel both further from the image (the glasses create an added layer of distance) and closer to it, as the depth perception makes it seem like we’re traveling through the image, or depending on how we see it, that the image is leaping off the screen to meet us. Either way, 3D gives us the sense of being somehow participants, allowing viewers to feel directly addressed. This is another reason why Godard’s brand of cinema, which requires an active viewership, seems tailor-made for what has historically been a commercially driven gimmick. From Goodbye to Language’s get-go, when the word ADIEU appears onscreen, big and frank and red enough to assault the eye, Godard is using the technique to force us to engage with his cinema in a different way, to question our motivations for looking at moving pictures at all, before going on to further interrogate those images on his own terms. By its nature, 3D only functions if the apparatus used to record its images and the human eyes there to receive those images all work in tandem. What happens, Goodbye to Language wonders, when even that breaks down, yet the pretense of 3D remains?

The film, as with all of Godard’s recent work, is collage-like and dialectical and obfuscating in ways both frustrating and pleasurable. As in his Histoire(s) du cinema, images only have meaning when juxtaposed with other images; as in In Praise of Love, Notre musique, and Film socialism, ostensibly fictional people, pseudo-characters, exist in a fractured contemporary moment, avatars of political consciousness or its opposite, depending on the philosophical tenor of the scene. So we have the usual Godardian sense of being and not being in time—an unreality heightened by the dramatic use of stereoscopic technology. Another illusion of 3D is that it somehow offers a greater sense of realism: even in completely fantastical worlds like that in, say, Avatar, there’s the notion that we can “reach out and touch” whatever is in front of us. Ostensibly it’s experiential, enhanced (whatever that really means), and it offers something more than all those relatively flat 2D films are capable of. Godard implicitly questions this premise early on in the film when the voiceover intones, “Those lacking in imagination take refuge in reality.”

The alleged clarity and vivid realism of 3D is not the point. For Godard, 3D does what cinema always does: it obscures. Goodbye to Language is all discord, the most dramatic and talked-about instance being a technically virtuosic but conceptually simple split in which the image breaks apart, so that the right eye and left eye are perceiving two different camera and character movements in the same scene. When the two images finally reconnect and our crossed eyes thus settle, it’s bravura because it seemingly reassures the film’s inherent stability. Of course, the optimism this reunification engenders must be false, or at least just a temporary balm. The world is too agonizingly split—and Godard’s cinema is too dubious of the potential for words and images to cohere meaningfully—to ever be properly reconciled.

Is what we see in Goodbye to Language inherently trustworthy? The film appears to be made up of various narrative elements: the lazing about of an adulterous, often undressed man and woman (played by, it seems, two sets of actors); a vaguely related, hard-to-follow cheapjack noir plot; and the wanderings—and philosophical musings, via voiceover—of Roxy, a masterless dog played by Godard’s own pooch, Miéville. Though the film is nominally divided into chapters (1: Nature; 2: Metamorphosis), Goodbye to Language forgoes the architectural clarity of In Praise of Love (two halves, one black-and-white film, one color video), Notre musique (three discrete sections titled “Hell,” “Purgatory,” and “Heaven,” each with clearly defined aesthetic parameters), and Film socialism (a tripartite structure, taking us from cruise ship to gas station to complete verbal and visual abstraction). After one viewing, it feels like a single quickly unraveling cinematic essay, jumping from one contained idea to the next with loopy abandon—as with most Godard, it’s funny and violent and jarring and restive and confounding and crystal-clear all at once.

There’s something almost comical about us critics bending over backward to write something meaningful about a film that so resists, even distrusts, words. Maybe we shouldn’t even try—exhilarating in the moment, Goodbye to Language is far more fun to watch than it is to write about, or maybe even think about after. When applied to language, this filmic tapestry in retrospect just becomes a litany. Nevertheless . . .

At one point, Godard will expound, via voice-over (keeping with the stereo theme, the film offers both male and female voices), on the lack of freedom brought about by the rise of technology, citing twentieth-century French philosopher Jacques Ellul who “saw it all coming”; at another he’ll have the endlessly regenerating horrors of history in his crosshairs, from Otto von Bismarck to Hitler to contemporary Africa. Throughout it all there’s also subtitled mutt philosopher Roxy, the star of scenes that become something like the most high-minded YouTube dog videos ever. And of course, there are the occasional musings on semantics (“What is the difference between an idea and a metaphor?”), which hang in the air like incitements to debates that never take place. As the title suggests, it will always come back to words, and what he perceives as their increasing loss of meaning and the basic breakdown in contemporary communication and memory. “Soon everyone will need an interpreter to understand the words coming out of their mouths,” is said at one point, reminding us we’re all unreliable witnesses to history.

Making all of this even harder to pin down is Godard’s arsenal of effects, both aural (the requisite bursts of orchestral strings, abruptly clipped; heightened bird squawks) and visual: canted and upside-down frames; the placement of objects, like lamps, flowers, wooden posts, and piles of books, in the extreme foreground; and nearly blinding superimpositions of images, all of which are made even more pronounced and intensely disorienting by being captured and presented in 3D. Throughout, the film somehow remains captivating even or especially when it’s flummoxing, a sensory ride with no discernible beginning or end. The film only seems to calm down when we’re in the house with the couple(s), where we can appreciate the way a woman’s body moves across a frame or the way a man shitting visually rhymes with Rodin’s Thinker. “Thought regains its place in poop,” he says. It’s one of the film’s few restive moments, and of course Godard can’t help but turn it into a literal toilet joke (yes, we hear sounds of excretion on the soundtrack). Is this scatological interlude a mind-body split, or a moment of rare symphony? Just as an image is never just an image in Godard’s films, a joke is never just a joke. We’re all equal when we shit, after all.

Near the beginning of the film, passersby at an outdoor bookstand fiddle with their iPhones while volumes of Solzenitsyn, Dostoevsky, and Pound lounge in the foreground. It’s a pointed moment, expressing much about the losses wrought by technology, but it would certainly be no revelation to Godard that this poetic, vital, and jarring film would not have been possible without some very up-to-the-moment gadgets. It’s what you do with the tools society gives you—do you make art or weapons? Do you seal yourself off from the world with your toys or do you use them to engage with it? There’s something truly energizing about the fact that the 83-year-old Godard has harnessed for his own idiosyncratic ends the visual potential of a bit of technological trickery acknowledged for the fickleness with which consumers have always bought into it. Considering its brief burst in the early fifties, its resurgence in the eighties, and its recent renaissance in the digital era, 3D has proven to be the most ephemeral of cinematic advances, the subject of a recurring rise-and-fall narrative. In fact, the form is already beginning to feel outmoded; it needed an octogenarian to make it fresh again. Godard seems to have inadvertently made a poignant éloge to technology.