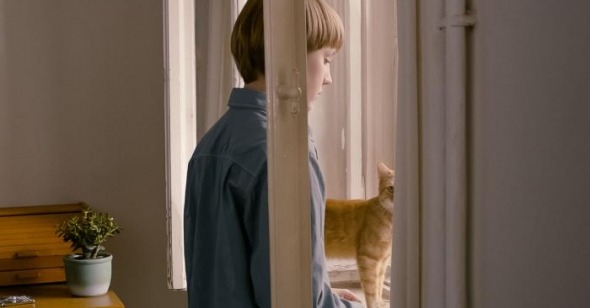 Every Day
By Jeff Reichert

How is it that Ramon ZГјrcherвҖҷs beguiling, curious, deceptively slight first feature, The Strange Little Cat, seems to take place over the course of one familyвҖҷs mundane afternoon, and at the same time in every possible moment in this familyвҖҷs history? One gets the feeling that the interactions and movements weвҖҷre witnessing have happened so many times in this space, and in just this way, that the film constantly evokes a sense of dГ©jГ  vu. The charactersвҖҷ ambiguous dialogue suggests that the people we see talking to each other might not all be living. And by the filmвҖҷs final frame you might wonder whether what youвҖҷve witnessed was an afternoon in progress, the memory of a day, or an image of something that never happened at all. ItвҖҷs a paradox of a quantum order: in ZГјrcherвҖҷs pleasingly brief filmвҖ”running a scant 72 minutesвҖ”the smallest of gestures carries the most import; everything and nothing seems in the right place; and the expected rubs elbows often and fondly with the unexpected. The titular cat might just be on loan from Erwin SchrГ¶dinger, the physicist whose reductio ad absurdum though experiment imagined that a cat, sealed in a box with a radioactive particle and some poison, could be both alive and dead until the box was opened.

The Strange Little Cat follows a familyвҖ”mother (Jenny Schily), father (Matthias Dittmer), son Simon (Luk Pfaff), daughter Hanna (Kathleen Morgeneyer), and her younger sister, Clara (Mia Kasalo), and various extended membersвҖ”over one long afternoon as they accumulate in a cramped apartment for a dinner celebrating some never-explained holiday or milestone. Simon and Hanna seem to be visiting home from university, and much of the filmвҖҷs opening revolves around various configurations of family members bustling throughout the space and discussing the lateness of SimonвҖҷs arrival the night before, whoвҖҷs seen him and who hasnвҖҷt. The viewers have: one of the earliest shots in the film is of Simon facedown in bed, though at that point weвҖҷre not sure who he is. Throughout the film, ZГјrcher parses out information in off-kilter ways: we learn the full meaning of an image retroactively, or an off-screen sound might cleverly mismatch an on-screen action (the grinding of a juicer over an image of young Clara at the dining room table with her mouth agape). Much of the household conversation centers on events that weвҖҷll never be privy to, and even those that occur during the course of the filmвҖҷs length (the much-discussed pickup of Grandma from her apartment by Simon) are often left unseen. This all results in a pleasantly destabilizing experience.

ZГјrcherвҖҷs static frames in apartment interiors recall Chantal AkermanвҖҷs in Jeanne Dielman, but his compositions arenвҖҷt as aggressively banal. HeвҖҷs also more withholding: where Akerman offers, say, an unobstructed long take of Jeanne breading some cutlets, a scene in CatвҖҷs kitchen might have us contemplating the sink as a parade of the actorsвҖҷ mid-sections flit by the camera, with off-screen voices our only cues as to whoвҖҷs jostling around the room. We never get a good vantage point on the apartment, only fragments of the space, and never are allowed to grow as familiar with it as in Ms. DielmanвҖҷs 23 Quai du Commerce, 1080 Bruxelles, which is left more than a little mysterious. The choreography in front of the camera is intricate throughout: actors move across and around each other with a velocity and control that recalls Hal HartleyвҖҷs frenetic stagings, but by employing stylized movement in a largely naturalistic atmosphere ZГјrcherвҖҷs created his own brand of hypnotic dancelike unreality.

The controlled rapidity of the family membersвҖҷ navigation through the spaces suggests also their unselfconsciousness within themвҖ”mother, father, Simon, Hanna, and Clara have all been in these rooms often together, and have well-worn routes for navigating around the furniture and each other. At times, the action takes on a ritualistic bent. Lest the proceedings get too insular or claustrophobic, ZГјrcher offers moments of respite in between the filmвҖҷs main sections of action. In each, San Francisco indie band Thee More ShallowsвҖҷs pulsing composition for guitar and strings вҖңPulchritudeвҖқ accompanies a series of shotsвҖ”a lovely moth that reappears throughout the film and a cup of milk with hair, a windowsill, the sinkвҖ”that echo conversations weвҖҷve heard or presage others. These moments of reflection suggest time passing and passed; in typical movie vernacular, these kinds of interludes would paper over days unseen, but ZГјrcher perversely pushes us towards grander contemplation of the moment to then put us back into the space of the apartment after only an hour or two has gone by. This tactic furthers the confusion about what is actually happening in this film and when: maybe we have dropped in on a different day, one that looks quite similar to what weвҖҷve already seen.

The filmвҖҷs closing image, of the mother alone, looking blankly off in the distance, follows a shot of the main hallway which lingers long enough for nearly every family member to leave the house through the front door. After all the build-up to the dinner, what is happening now? Why is everyone leaving the mother alone? What have we just seen in this apartment? Why is she so blank all of a sudden, almost like a Bressonian actor-model? The uncanny everyday plumbed by ZГјrcher in The Strange Little Cat recalls recent oddities like Neighboring Sounds, Viola, Exhibition, and The Future, all of which locate the strange and magical amidst the refuse of the everyday. ItвҖҷs a strand of cinema, stretching back from Blue Velvet to Jacques Rivette to RenГ© ClairвҖҷs The Italian Straw Hat, which has no time for the aggressive tricks of вҖңmagical realismвҖқ because itвҖҷs too busy locating the miraculous in the mundane. This kind of art wants you to believe that you need only view your surroundings askance, perhaps through half-shuttered eyelids or in a mirror, to find unexpected possibilities opening up. The Strange Little Cat films one day as expansively as if it were all days. For its characters that day in the life might as well be every day theyвҖҷve ever livedвҖ”or not lived. ItвҖҷs the littlest big film to come along in ages.