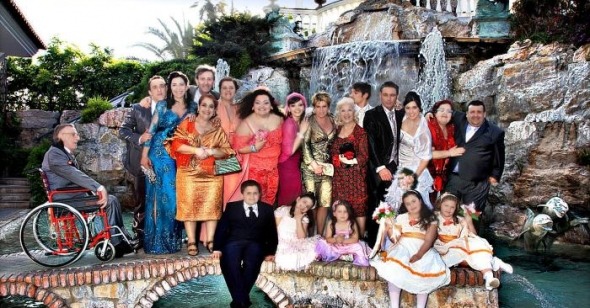 Eyes on the Prize
By Michael Koresky

In the U.S., Reality might be too easy a sell. Have you ever watched the teary, mascara-stained faces on The Bachelor and mused about the possibility that these allegedly lovelorn contestants were somehow less than genuine? Have you become embroiled in an elimination competition program such as Project Runway or Top Chef only to come to the unsettling realization that a narrative may have been laid out for you from the very beginning, despite a series of seemingly spontaneous twists and turns? Did you ever find yourself invested in the trajectory of a single person on one of these shows, while entertaining the sneaking suspicion that he or she was, through the careful manipulation inherent in filming and editing, just a character created for your consumption, stamped as either hero or villain from day one? If you’re a thinking, even remotely critical person living in the world today, then of course the answer to all these is yes, and also you’re probably the target audience for Matteo Garrone’s Reality, an oddly muffled character study cum media satire that is better visually conceptualized than narratively realized, and which doesn’t have much in the way of emotional revelation for those likely to watch it stateside.

Back home in Italy, the film has registered more keenly, perhaps because they are still crawling out from under a prime minister whose legacy is marked by tax evasion and media monopoly, game shows and bouncing bimbos. A show predicated on voyeurism and humiliation like Big Brother, the program that sits like a bioluminescent tumor at the center of Garrone’s film, would seem to be the quintessential cultural marker for a period led by a man who was once a cruise-ship and nightclub crooner. Reality is then the unspoken anti-Berlusconi film of the moment, interrogating at once a culture of crassness, wild social inequality, and blatant fraudulence, both financial and otherwise. Packing all this in, it’s not a surprise that Garrone’s film can’t, or hesitates to, communicate its themes in a less excessive manner. Its evolution from possible wish-fulfillment fantasy to an interior portrait of psychosis and paranoia is structurally fascinating, but also causes the film to lose sight of a target.

Like he had with his last film, the mournful mafia exposé Gomorrah, Garrone manages to find just the right, tricky tone for his subject, which in this case alternates fluidly between the grim and the enchanted. Reality constantly wants to be a fairy tale (as indicated by Alexandre Desplat’s bouncy, grandiloquent score), though disappointment keeps seeping in through the cracks, overtaking any chance for whimsy. As with Gomorrah—adapted from Roberto Saviano’s death-defying undercover dispatch from Naples’ organized crime system—Garrone is not just trying to tell emotional truths of individual characters but rather diagnose the contemporary Italian sociopolitical landscape. His conduit this time is the excess of popular culture, and as such his film wears its cinematic influences—La dolce vita, The White Sheik, and assorted other Felliniana—on its sleeve. In form, however, the film feels closer to the hectoring Seduced and Abandoned, the Pietro Germi film that, in getting at a larger point about the domestic damage incurred by the persistence of patriarchal social customs in Sicily, risks drowning in grotesquerie itself.

What’s ultimately being implicated in Reality—an entire culture or one family of deluded, mostly fat doofuses? Our hapless protagonist Luciano is Garrone’s own Rupert Pupkin, a fishmonger and sometime shady black-marketer whose only life goal, as far as we’re privileged to see, is to become famous. The easiest route to celebrity is getting on Big Brother, the reality show preoccupied less with talent than exhibitionism. As played by Aniello Arena, an actor currently serving a “life” sentence (twenty-eight years in Italy) in prison, only allowed out on certain days for shooting scenes, Luciano is brawny and likeably starry-eyed, and there’s something undeniably poignant in the way he guilelessly gazes at the television or at an in-the-flesh star. Garrone has said that he considers Luciano a “modern-day Pinocchio,” which makes a certain amount of sense considering his single-minded drive to attain what he perceives as happiness. Like the little wooden boy’s desire to become “real,” Luciano hopes to attain realness by being on television. In his mind, his identity only exists in relation to those watching him, making him a less homicidal version of Nicole Kidman’s weatherwoman in To Die For, who memorably philosophized, “You’re not anybody if you’re not on TV.” Yet his initially ingratiating childlike naïveté comes at the expense of the strained family portrait surrounding him, a clan of gaudy, mostly overweight kids, siblings, uncles, and grandparents squeezed into a tiny hovel of an apartment. These are Luciano’s beasts of burden, filmed pointedly in stark, unforgiving counterpoint to the lithe youthful bodies on display in the Big Brother house, as well as to Luciano’s unavoidable buff torso, which both sets him apart from his relatives and indicates the narcissism of fame-chasing.

That Garrone would use the extended family unit mostly as a visual gag (we are treated to the image of Luciano’s rotund sister running and jiggling in revealing outfits twice) fits in with Reality’s overall aesthetic of excess. The film opens with a series of bravura, fittingly show-offy shots: in the first, the camera soars over a mountainous Neapolitan cityscape before locating and focusing on a horse-drawn golden coach parading down an urban street otherwise dotted with zooming cars. After the fez-capped snow-white equines trot through two glittering gates, Garrone cuts to the massive courtyard of a mind-boggling wedding complex (the scene was shot at a hotel that was a former royal palace). Here we get a single-take succession of hyperbolic spectacles—doves released into the sky, superfluous ceremonial ribbon-cutting, bewigged ushers decked out in pompous eighteenth-century finery—before meeting our protagonist. Luciano is here for a wedding but also to impress a very special guest: a beloved fedora-and-plaid-jacketed celebrity named Enzo, famous for last 112 days on Big Brother, who skips from one wedding ceremony to the next in order to parcel out words of wisdom, such as his meaningless catchphrase “Never give up!” To get Enzo’s attention, Luciano doesn’t merely ask for his autograph: he dresses in garish drag and confronts him in a sort of odd public humiliation-affection routine. Mere minutes into the movie, Garrone has masterfully established a world of bountiful delusion and nearly surreal razzle-dazzle—and, alarmingly, it’s only slightly tweaked from our reality.

Things turn grim but no less ostentatious after the wedding when the family trudges to their flat, perched at the top of a cavernous, rotting apartment house most notable for its neon Virgin Mary in the courtyard and its vertiginous crisscross of steep stairs up which Luciano must carry his wheelchair-bound father-in-law. We soon get a series of images of the family members in their own spaces, presumably presented as voyeuristic in order to parallel and predict the images of Big Brother that will later fascinate Luciano. Whether we needed to see a huge, hairy man chowing down on one slice of watermelon after another as counterpoint to a body-obsessed culture is questionable: the film seems to be getting us to wonder which is more repellent, the buff and the bronzed or the lumpy and the wretched. Unfortunately, and possibly even unintentionally, the result often comes across as a free-floating misanthropy.

As the film progresses, it becomes clear that Garrone is more intrigued with the second meaning of his title: after a series of successful auditions for Big Brother (which we never see) and being told by both producers and friends that he’s a cinch to make it onto the show, Luciano begins to lose grip on his own sense of reality. Suspecting that he’s being secretly watched (in an additional twist on the culture of Orwellian surveillance that the show’s title invokes) and sized up by the show’s producers, he begins to act as though he’s already being filmed, and begins acting uncharacteristically charitable toward homeless people—in a moment of ever-growing madness, he even gives away his family’s belongings to the poor, much to the noisy chagrin of his increasingly fed-up wife (Loredana Simoli). Luciano seems to be entering a sort of fugue state, going about his daily motions with his mind elsewhere—the only cure would be a miraculous phone invitation from the show’s producers. As Luciano is swallowed up by his own obsession, Garrone begins to alter his aesthetic, relying more on distorting wide-angle close-ups and left-field surreal touches (such as a harnessed Enzo flying over a grinding crowd at a deafeningly loud club), and little by little what began as exhilarating grows irritating.

Luciano’s mental degradation functions perfunctorily as a metaphor for national delusion, but it’s ultimately inadequate fodder for drama. It’s intimated that Luciano has a troubled past; though we never learn the source of his apparent trauma, he reveals to us and his wife that it all poured out of him to a psychologist during the audition process. Though there’s ambiguity in whatever ails him, this reveals concretely that he’s also eternally fragile, his gullibility an inherent character flaw rather than a relatable symptom of a larger cultural disease. The viewers are then forced to become passive observers as he falls ever deeper into a deluded morass—or rather, ascends ever higher to his lofty goal, to more accurately reflect one of the film’s central metaphors. In the purposely anticlimactic last act, Luciano finds a way in. Garrone closes Reality by leaving him alone on his own personal cloud nine, where he’s as deluded as anyone who thinks he can trick his way into heaven. It’s a final gesture that’s generous or nasty, depending on your point of view. Either way, Garrone abandons Luciano, a cackling inmate of an asylum of his own making.