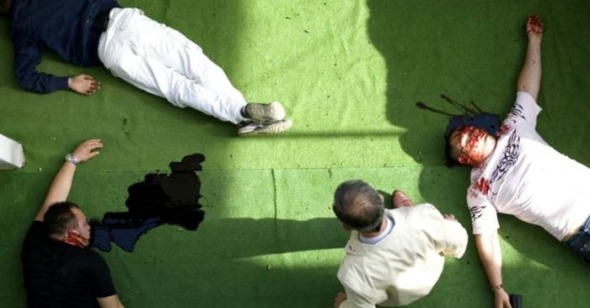 The mafia: Is there any other organization, legal or illegal, that’s so benefited from the mythologizing power of the cinema? While engaging with such subject matter invites de facto vicarious thrills Italian director Matteo Garrone can never entirely shake—even in the post-Sopranos era he’s still dealing with a semi-hidden world that provokes wonder and fascination no matter the attempts to divest its players of the untouchable aura of outlaw beatification—he goes as far possible into the realm of the mafia’s unfeeling ruthlessness in his latest film, Gomorrah, without tripping over sentimentality or stylization. Gomorrah doesn’t intend to do much in the way of formal innovation, but this year’s Cannes Grand Prix winner might very well make its influence felt in its direct and unpretentious approach toward the nefarious activities of the Camorra, the enormous mafia empire that, according to the film’s closing titles, is responsible for the murder of some 4,000 people in the last 30 years, and has such formidable financial muscle that it’s even claimed a stake in the reconstruction of Ground Zero.

Based on the bestseller by Roberto Saviano (also one of the film’s many screenwriters), Gomorrah shows how the Camorra have snaked themselves into every facet of life in Naples and Caserta. They mold the moral development of 13-year-old Totò (Salvatore Abruzzese), a street kid who enlists as a soldier with one of the clans and must betray the trust of a neighborhood woman whose groceries he delivers; they have also grabbed a hold on the imaginations of Marco (Marco Macor) and Ciro (Ciro Petrone), two brazen young hoodlums whose mimicry of Scarface’s “The World Is Yours” fearlessness runs them afoul of the local families who manipulate their naïve greed so that they can be easily removed from the picture. Of the five interwoven (though thankfully never connecting—we’ve had enough of that in recent years) stories that comprise Gomorrah, Marco and Ciro’s is the funniest and also the saddest. One of the punks speaks in a scratchy voice, the other a whiny one, the two forming a sort of Mutt and Jeff team of morons who, in order to make a name for themselves in the underworld, conduct drug deals and then hold up their buyers, steal from a secret weapons stash, and rob an arcade. Gomorrah’s best scene has the dubious partners in crime strutting around a shallow riverbank, shooting off rounds of ammo (including a bazooka that blows up a boat) in nothing but their underwear, screaming lines from Scarface. It’s imagery both silly, pathetic, and not a little threatening—there’s no telling here whether Marco and Ciro should be taken at all seriously (loose cannons are, after all, the most potentially dangerous) or should just be pitied for pompously believing in the gangster machismo that will cost them their lives and waste their youth.

Aside from this moment (and another one where a hazardous mafia-run job of filling a quarry with toxic waste is eventually undertaken by children, the only ones willing to drive the trucks), there’s little “poetry” or self-conscious gangster “operatics” on display in Gomorrah. Violence is sudden, brutal, and definitive (several drive-bys and hit-and-run assassinations descend with no warning, and are thus absolutely terrifying), the closed-door scheming is cold, practical, and unfeeling (a schlubby boss rebukes Marco and Ciro for their wildness in between rounds of video games), and the “family” loyalty that’s been so essential in the cinema for raising common thuggery to the heights of Greek tragedy (from The Musketeers of Pig Alley to Rocknrolla) is utterly absent or else routinely betrayed. Unlike Afterschool, in which shallow focus is drearily employed for sub–Van Sant stabs at signifying “alienation,” Garrone expertly controls depth of field so that characters remain locked into their immediate surroundings, unable to escape an environment both systematically and physically restricted. Garrone also proves himself expert at framing and directing his actors. Don Ciro (Gianfelice Imparato), a thankless errand man who pays out to relatives of prisoners who’ve remained loyal to his clan, becomes more and more jailed within the labyrinthine of a multilevel slum complex that is his monthly route, while his increasingly vulnerable condition stiffens his posture and cowed expression to the point of betraying utter helplessness and “family” abandonment.

It’s small details like these that should be looked for in Gomorrah—if stylistically the film is unostentatious and narrative-wise its storylines are more demonstrative than character-driven (as reinforced by the topical closing titles), those choices together foster a tough portrait depressingly close to the poverty of the slums and the avarice-guided business practices of its overlords. In short, Garrone has allowed us wide-scoped entry into a forbidden world without making its taboos indicative of the same old, boring, exotic danger or titillating recklessness—Gomorrah’s is the unremarkable mafia of pimple-faced teenage soldiers and techno-blasting, tracksuit wearing troglodytes. If Garrone often makes obvious points in connecting a mafia-controlled tailor to the Hollywood A-list or showing how a young apprentice can stand up to his unscrupulous toxic waste “manager” boss, he also presents all these dirty and despicable dealings in the most unadorned clear-eyed manner; it’s not comforting and doesn’t have the requisite tragic dimension. At Gomorrah’s end some of its characters have survived, some have been brutally killed, but nothing has been “concluded.” We’ve witnessed several moments in organized crime’s ubiquitous stranglehold over an entire social stratum, where lives get chewed up and spit out through a system grinding ceaselessly on.