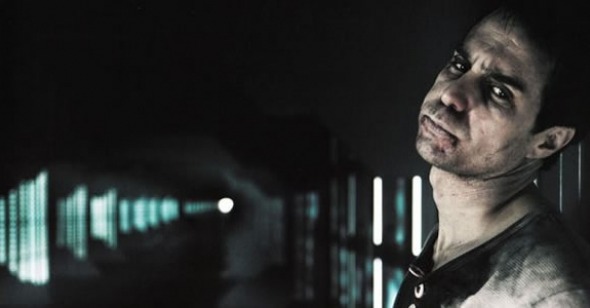 Made of Cheese
by Jeff Reichert

Science-fiction filmmaking built from brains rather than balls is an increasing rarity; finding it hitting screens deep into June is a near impossibility. Duncan Jones’s directorial debut, Moon, a cleverly low-fi one-man-show for Sam Rockwell tinged with philosophical overtones, may well ride its singularity to a level of praise its overall modesty and cheeky aesthetics don’t really aim for, but that’s not really the movie’s fault. We could use more speculations like Moon—as the expiration dates on our genre landmarks pass by without fulfilling their fictive promises (2001’s come and gone; Blade Runner’s 2014 is fast approaching and replicants, save perhaps the cast of The Hills, are barely a glimmer on the horizon), our collective imagination needs a bit of a refresh. It also doesn’t hurt to have an early summer reminder that science fiction needn’t just be action filmmaking peppered with spaceships and stun guns and time warps. Sci-fi’s supposed to run on ideas, and thankfully Moon has more than a few.

Rockwell plays Sam Bell, some kind of bedraggled space miner who’s signed up to a three-year contract on the moon watching over a quartet of massive vehicles that plumb the satellite’s crust for Helium3, a crucial ingredient in fueling the clean fusion energy revolution back on Earth. (This setup is dispatched by the somewhat less than credible mock energy infomercial that opens the film.) Aside from a few faces on monitors, Sam’s is the only human form we encounter for the duration of the film. Jones does a clean, efficient job establishing Sam’s routine, focusing just enough on details—his preferred breakfast, the forlorn videos he records to send home to his wife and child, the model village he’s painstakingly assembled—to sketch out in brief daily life in this depopulated, largely automated mining colony. Here, Jones invokes, of all films, Chantal Akerman’s Jeanne Dielman, in that things are obviously already somewhat awry by the time we hear Sam’s first awkward and lonely dispatch to his masters back on Earth—remember that Akerman hints that her heroine’s routine is slightly off right at the beginning, when Jeanne forgets to turn the light off following the arrival of her first john.

It’s not long after this that Sam begins hallucinating. After a mishap in the field while checking on one of the mining machines leaves him injured, Sam awakes to find himself shaven, cleaned and healing in the infirmary. The onboard HAL stand-in Gerty (voiced by Kevin Spacey—perhaps his most appropriate casting in years, and certainly his best performance) offers no real explanation regarding the accident or how he arrived back at the base. More invigorated than the desiccated Sam we met at the film’s opening, the miner continues his daily routine, until he travels out to the busted mining vehicle only to find a more hirsute copy of himself sitting inside a nearby rover, injured and unconscious.

By this point Jones has already credibly established his handmade effects—the wonderful model work of his exteriors (erroneously dubbed by some as CGI) recall the physical heft of the original Star Wars spacecrafts. Offering an actor as pliable as Sam Rockwell the possibility to play against himself in a series of no-fi in-camera effect shots kicks the film into gear for a time as Sam Bell the younger faces off against Sam Bell the injured and fading, and both wonder how and why the pair of them has ended up together in the same space. Jones’s switch between Sams is invisible at first, and, for a time, the sight of the pair of them opens up a broad expanse of speculative possibility, especially given the first Sam’s hallucinations. [SPOILER ALERT] However, unlike, say, Solaris, where the mysterious space station visitors eventually proved to be the manifestations of the astronauts’ psychic desires as produced by the watery, living world below—a vast metaphor if ever there was one—here the two Sams prove to be simply clones of an initial Sam living happily back on earth. Jones teases us with ideas of clone trace memories, unending replication and the like (both Sams inexplicably know the parameters of their lives almost immediately, and there seems to be an unending stock of them, waiting to be awoken at three-year intervals), but once the pair sort out the reality of their system, the film goes strangely slack.

Moon’s one major fault is this storytelling apportionment. I wouldn’t have minded if Jones had loosened things up a bit and milked the ambiguity inherent in his two-Sam scenario for at least a little longer. There’s not much for the pair of Sams to actually do once they figure things out besides soak in the implications, re-view the formerly banal lunar station as a space of horror and conspiracy and try to get some kind of information about their predicament from Gerty. The older Sam’s body begins to decay, the home office sends some assassins to “check in” on the base’s steward(s), and Sam the younger plots an escape. Still, even with the inertia inherent in the setup and limited avenues of potential it affords, Jones, primarily known at this point (aside from being David Bowie’s son) for an inexplicably touted FCUK spot in which two women catfight and then make out, does a nice job of keeping his interior shooting varied and fluid, and he doles out Clint Mansell’s insistent piano score appropriately (this isn’t the aural carpet bombing of his compositions for Requiem for a Dream). Moon takes its scenario about as far as it can, recalling the limited, unabashedly cheesy, entertainment-minded science-fiction filmmaking of yesteryear. Even though Jones seems to aim for 2001, he’s landed much closer to Forbidden Planet and The Quatermass Xperiment. I hope he’d find that a compliment.