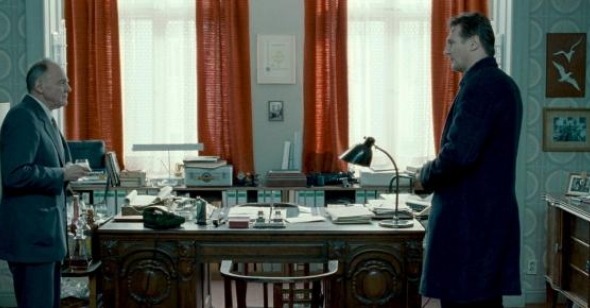 Every Monday, two Reverse Shotters wipe the weekend from their bleary eyes and engage in a postmortem on the multiplex trash (good or bad) they took in. For this frigid February week, it‚Äôs Orphan master Jaume Collet-Serra‚Äôs Unknown. First, read Justin Stewart‚Äôs review of the film here.

Is it too early to crown young Catalan Jaume Collet-Serra the savior of big-studio genre filmmaking? Perhaps, but if Orphan was a nasty, awesomely transgressive wake-up call for those who assumed his House of Wax remake was merely another anonymous cinematic boneyard for lithe teen forms, then Unknown, his new, classier, Euro-set and now-box office topping identity thriller reveals a filmmaker with sights set higher than the grindhouse ceiling. If Collet-Serra stumbles a little on the road to Polanski-dom, you can‚Äôt fault him too much. He is, after all, one of the only filmmakers even trying. Unknown suffers slightly from a poky, arrhythmic section (in which the filmmaker trusts his editor over his cameraman, choppily short-circuiting the elegantly dread-laced lensing the scenario‚Äôs first act requires) that follows the whiz-bang opening, but the film regains boatloads of mojo with perhaps the great car chase of the last half-decade or so (in which said trust in editor pays dividends: the lengthy pursuit feels as though it was cut to the tick of a metronome‚Äîyou can count the beats while watching).

If all Unknown had to offer was one great automotive sequence, it‚Äôd be barely worth mentioning, but consider all the various inspired touches throughout that suggest a filmmaker attentive to the smallest of details: a medium close-up of an unconscious Neeson riding the backseat of a cab headlong intro a river that‚Äôs infused with the solemnity of a religious icon; the way the camera lingers for a beat on a shard of glass pulled from a gutted belly just long enough to catch the drip of gooey, syrupy stage blood; a tossed-off one liner about an apartment‚Äôs ‚Äúcardboard-thin walls‚Äù that roundabouts into the setup for a particularly muscular bout of fisticuffs. It may be hokey at times (that the plot hinges on corn, of all things, is perhaps the first signal that nothing here should be taken at face value), but at least it‚Äôs not a self-serious bore. Still for its myriad pleasures, Unknown could‚Äîshould‚Äîhave been a mite crazier and creepier (and less diced), but for being the film that finally, at long last, put Bruno Ganz into the meaty arms of Frank Langella, it deserves, at the very least, our thanks. ‚ÄîJR

Jeff, in response to your question, no, it‚Äôs not too early to crown JCS. Best to stay ahead of the curve while other critics play catch-up. In some ways, Unknown is a step backwards after Orphan, which mounted a steady parade of tasteless (and ever more hilarious) atrocities that suggested what The Omen might have been like if only Gregory Peck hadn‚Äôt been cast for reasons of credibility (or maybe Damien: Omen II on a coke binge). The newer film is at once more restrained and less shapely: Orphan was ugly but it also paid off all of its set-ups with gusto. Unknown seems to have been made under stricter supervision, and so isn‚Äôt comparably batshit; though, a few of the moments you cite are the ones where the director's sense of humor breaks through‚Äîquite literally in the apartment dust-up.

We‚Äôre in agreement about Collet-Serra's attentiveness to visual details: I‚Äôd add to your list the way that he tilts the frame slightly when Neeson confronts January Jones at the hotel ballroom, a subtle perceptual effect that makes it feel like the reality is curling at the edges. (It collapses entirely for the final fight scene between Neeson and Aidan Quinn, which takes place amidst abstracted interior wreckage). What surprised me was how the film moves from being told almost entirely through Neeson‚Äôs (possibly untrustworthy) eyes to a bigger-picture POV more in tune with old-school espionage tropes‚Äîwhich is where Unknown finally throws its lot after all that identity-crisis foreplay. The mutation comes outfitted with a smirk: I too noticed the corn-centric MacGuffin, and should tell you, in case you missed it, that the name of the newscaster offering the supremely uninteresting narrative recap during the coda gives her name as ‚ÄúAnnabelle Mundane.‚Äù Hopefully, these aren‚Äôt the distancing devices of a filmmaker who thinks he‚Äôs just slumming, because I think Collet-Serra‚Äôs talent is a low one‚Äîand that's a high compliment. The worst thing that could happen would be if he got it in his head to ‚Äúelevate‚Äù his material, which is why I‚Äôm half-nervous about his proposed remake of Le Cercle rouge. Given his unruly sensibility, I‚Äôd rather see him do a deep-purple redux of Deep Red. ‚ÄîAN