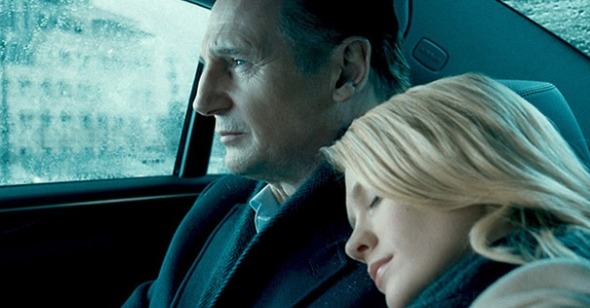 Alert to its own recycling and indebtedness to directors like Fritz Lang, Roman Polanski, and John Frankenheimer, Unknown wisely features a character who's a throwback to subterfuge of yore‚ÄîBruno Ganz‚Äôs J√ºrgen, formerly of East Germany‚Äôs Stasi unit in ‚Äúthe old days.‚Äù He's the only authority figure willing to assist our hero, Dr. Martin Harris (Liam Neeson), who wakes from a coma to a wife who claims not to know him and a phalanx of ominous agents on his tail. Employing distinguished actors to elevate otherwise frivolous pap is nothing new, but here the addition of Ganz accomplishes just that. Between hacking coughs and ill-advised sips of brandy, J√ºrgen quips cryptically (‚Äúthe Germans are experts at forgetting‚Äù) and dials up old Stasi colleagues to help figure out Martin‚Äôs dilemma, mostly as a diversion from boredom and illness. The movie's best scene is an actorly duet between Ganz and late arrival Frank Langella that bracingly acknowledges past glories (the Langella character‚Äôs grandson, he notes, loves the old Cold War stuff) and their mutual fleeting mortality.

Not that casting Liam Neeson as the leading man doesn't already assume heft. His 6'4" frame, hard, perpendicular angles, and aslant, imposing nose fill the physical requirement, and his eyes and voice are still able to betray a weakness that makes him a sympathetically fallible hero. Following Taken, Clash of the Titans, and The A-Team, the former Oskar Schindler is now a legitimate, box office-approved Action Dude, aptly equipped to deliver all-American beatdowns abroad (no matter that Neeson is Irish). It‚Äôs a fate not surprising to fans, like me, who first enjoyed him in Sam Raimi‚Äôs 1990 action-comic Darkman. Schindler's List seems now more obviously the exception in the career of an actor so genetically suited to hoisting heavy weaponry and elbowing villains in the esophagus.

Here, he‚Äôs an American researcher in Berlin to deliver a presentation at an international biotech convention. His carry-on companion is wife Elizabeth (January Jones). Arriving at the hotel/convention site, he's forced to abandon her abruptly, as he left an important briefcase at the airport. The hurried cab ride (the driver, played by Diane Kruger, is surprisingly shortcut-savvy for an unseasoned Bosnian immigrant) turns nightmarish when an accident sends the cab careening into a river. Liam lives, but when he wakes up in the hospital it's four days later and his memory is shot. When a cable news piece about the convention reminds Martin who he is, he rushes to the hotel to reunite with his wife, only to be greeted by a vacant stare and a replacement him (Aidan Quinn). (Incidentally, Nick Schager, writing in the Village Voice, says Jones botches this crucial moment, but I'm not sure what he means‚Äîlater developments reveal that her blank reaction is just what‚Äôs called for, and it's the perfect catalyst for Martin‚Äôs ensuing paranoia. A knowing flicker from his wife would've offered comfort.)

The rest of Unknown consists of Martin frantically trying to glue together an identity, a journey that will leave a trail of bodies. Mysteriously, his memories (shown in ugly, digi-filtered snippets) amount to little more than one cuddly photo taken with his wife at a restaurant. He tries to contact his best friend, Professor Rod Cole (Langella), but he always gets an answering machine (‚ÄúI'm having an out-of-office experience‚Äù). A nurse leads Martin to J√ºrgen, and he contacts Kruger's guileless Gina, who falls a little bit in jealous love and accompanies him during multiple car chases and shootouts.

The tropes are familiar. Every man wearing a tie is a potential enemy. When Martin speeds up to elude one anonymous drone in the subway, the drone, of course, speeds up too. In one flashback, the blond Jones has short, dark hair, calling into question her identity and echoing Hitchcock via Femme Fatale and countless other films. More than once, a hospitalized Martin is injected with unspecified, undoubtedly evil clear fluids. At a faucet in a subway bathroom, he splashes cold water on his face and looks in the mirror, searching for himself.

Director Jaume Collet-Serra overcomes the banality of these particulars thanks to the stylishness of his overall design, his knack for a good car chase, and sensitivity to both the appeal of the Ganz-Langella scene and how good Jones looks from behind in a backless black dress. When Martin blinks awake in the hospital, there are some fun behind-the-eyelid shots out of Powell and Pressburger's A Matter of Life and Death. In a clever set piece, Martin is both chasing his wife and dodging a furtive thug at an art gallery exhibit called ‚ÄúFaces,‚Äù the photographs all pretentious close-ups of same that no doubt purport to question the idea of identity.

Collet-Serra is on a roll, having made 2005‚Äôs tightly controlled and memorably gooey House of Wax, 2009‚Äôs wicked and massively entertaining Orphan, and now this more than adequate thriller, all produced by biggest fan Joel Silver. For Collet-Serra, character establishment and scene setting are not afterthoughts. Orphan was about a Chucky-like young Russian adoptee, sure, but you cared about her crimes because Vera Farmiga and Peter Sarsgaard‚Äôs family was so richly sketched, and the empty spaces in their house so palpably cold. As it concerns such international intrigue, Unknown is a more unwieldy project than the localized Orphan. ‚ÄúIt tops Taken in every way!‚Äù per the TV ad pull-quote, and it does seem modeled after recent terrorism-fearing successes from Luc Besson's EuropaCorp. But thanks to Collet-Serra, and Bruno Ganz, it‚Äôs pulp with personality.