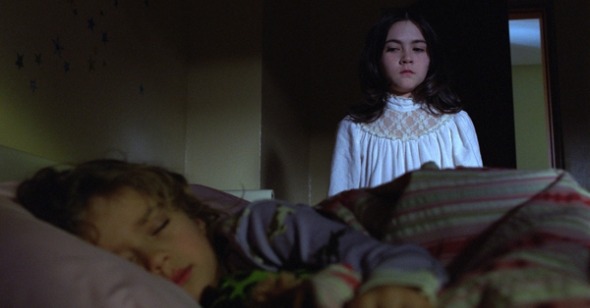 Insane in the Membrane
by Michael Koresky

If ever a movie called for a patented millennial ALL-CAPS live-blogged text review, it would have to be Jaume Collet-Serra‚Äôs Orphan, or, as it will likely forever be known moving forward, OMG, DID YOU SEE ORPHAN WTF?!. Blasted into theaters with surprising fanfare (I would have suspected that Warner Bros. would have taken a more stealth approach with this nasty little nugget once they saw the dailies, but hell, Harry Potter‚Äôs funders must be having a particularly ‚Äúaw, hell, fuck it‚Äù attitude of late), Orphan drips across the screen like sewage. The rare ‚Äúshocker‚Äù that genuinely shocks, Collet-Serra‚Äôs all-purpose offender takes the utmost care to be careless in its phenomenally amoral attitudes towards everyone and everything that slithered across the dank dungeon that is screenwriters David Johnson and Alex Mace‚Äôs shared mind. As a friend noted upon exiting the multiplex this weekend, once upon a time Orphan might have existed, with decidedly less illustrious production values and high-end performances, as fodder for some fetid, holed Times Square peep den. Today it‚Äôs a hop, skip, and a jump away from that other orphan flick, Harry Potter and the Prisoner of the Secret Blood-Goblet. Guess which one‚Äôs more tedious, though?

With a histrionic and suitably upsetting opening dream sequence, Orphan wheels right in like a dead baby on its way to the morgue. Those unfortunate children (even more unfortunate, perhaps, than those onscreen) who had been taken to this particular matinee showing should have been shown the exits right here (about the time the bloody stillborn child is held up to the screen in dripping closeup), yet their parents were ‚Äúcool‚Äù enough to let them stick around. As a result, I can almost guarantee there‚Äôs a handful of Brooklyn tots currently having nightmares about, variously, a) pigeons being crushed to pulpy jelly by enormous rocks; b) sweet nuns getting their heads hammered open; c) a cherubic little (deaf!) four-year-old whimpering as a loaded gun is pointed at her head, and then later, whimpering again as she raises the same loaded gun herself in an attempt to save her mom from being sliced to death with a carving knife; d) an eleven-year-old actress doing her best black-widow, tarted up in a short black evening dress and lipstick, and coming awfully close to successfully seducing a forty-year-old man.

Despite all this, nay because of all this, Orphan is one of the meanest, and best, entertainments around, a sturdy, thoroughly depraved bit of movie phlegm that only a mother-fucker could love (and that only a CPS most-wanted parent could inflict on their young). As a post‚ÄìRosemary‚Äôs Baby everyone-thinks-mom-is-nuts thriller it far surpasses Changeling (even when Vera Farmiga‚Äôs protesting Kate Coleman is put briefly under psychiatric sedation following an outburst); as a psychopathic kid chiller it leaves in the dust the unintentionally hilarious Joshua (also starring Farmiga, who might have ‚ÄúI work well with horses, dogs, and evil kids‚Äù on her resume), as well as any of the other recent creepy kid flicks, most of them originally from Japan. Little Esther, here, doesn‚Äôt merely walk around with strands of black hair falling over her eyes: oh no, she‚Äôs very proactive, this one‚Äîdeceptively charming one minute, full-throttle slasher the next. The film, in fact, is so itching to get to the good, gory stuff that it shortchanges one of its best scenes: a gift of a white-rose bouquet given to her understandably miffed adoptive mother that should have been one of Esther‚Äôs first nefarious deeds comes too late in the film, when the tyke‚Äôs already introduced Sister Abigail to the blunt end of a hammer.

But it‚Äôs a rare structural misstep in a film that really knows how to pace its wallops. Like Esther, it‚Äôs cool, calculated, and absolutely crazy, giving a middle finger to any and all proprieties you thought movies‚Äîeven disreputable horror movies‚Äîhad about such niggling little things like, oh, endangering children. Not that the impressive Isabelle Fuhrman‚Äôs parents seem to mind much: her previous film was the much-derided, severely watch-grouped ‚ÄúDakota Fanning rape movie‚Äù Hounddog, and next up? A new TV version of Children of the Corn. Ah, the dreams of babes.