The Father of My Children 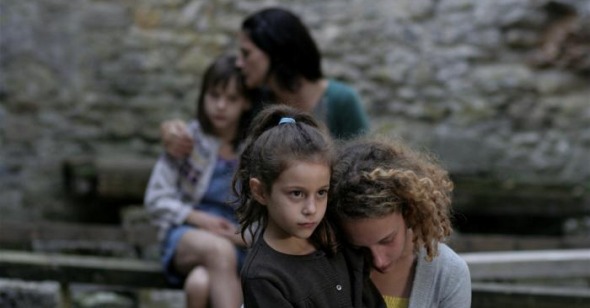 Business or Pleasure
by Michael Koresky

In The Father of My Children filmmaker Mia Hansen-Løve makes something oddly beautiful and complex from a basic comic template. A story of a workaholic dad who has an immensely difficult time juggling business and family, the film nevertheless takes its conventions in a unexpected direction. From the start, all the clichés are in place: a disheveled man (Louis-Do de Lencquesaing) wearing a rumpled suit negotiates about seven different associates squawking into his cell phone while rushing down a Paris sidewalk, both on foot and behind the wheel of a car. His harried wife (Chiara Caselli) sits impatiently at home with the kids, who include, naturally, two adorably precocious young daughters, and a distant teenager (Alice de Lencquesaing), who’s wise beyond her years in that way that only rosy-cheeked but no-nonsense bourgeois French teenage girls seem to be.

Yet Hansen-Løve, as it turns out, is not interested in charting the everyday frustrations of a man unable to mix his worlds; rather The Father of My Children becomes a portrait of crippling contemporary anxiety, both professional and familial, and the possibility that they may never be fully reconciled.

There’s an ease and affability to the opening half of the film, but that gives way to something darker, and the director excels at maintaining a mood of hyperactivity without telegraphing her themes or giving away her at times shocking destinations. The Father of My Children’s first section focuses almost exclusively on the business activities and desperations of the father in question, Gregoire Canvel, who, in an intriguingly self-deprecating twist on the filmmakers' part, is a movie producer. Though this is a work about the film industry, it is not the story of a misunderstood artist navigating a treacherous world looking out for the bottom line. Gregoire is a wheeler-dealer who declares, with near embarrassment, that he’s from a family of industrialists. His defense of a certain Swedish auteur, whose film has gone into budget crisis, betrays his artistic heart (as does his delight in showing his daughters a church mosaic during a rare weekend outing), however, even if all we ever see him do is try to calm down financiers and provide a shoulder for disgruntled actors to cry on in between takes.

In the few moments he’s able to tend to his wife and daughters’ needs, he comes across as warm enough, yet disengaged. His true personality only seems to shine through when he’s in his cramped office. Hansen-Løve obviously knows this world well—the discussions of Gaumont and Canal Plus; the erratic behavior of directors and actors; the seemingly impossible task of appropriately funding dream projects, often not your own—and she somehow miraculously makes it all seem like something much more than insidery or self-winking. She shoots Gregoire’s workplace with an approach that can only be called hectic tedium, allowing dry conversations to go on way past their point of interest to us lay viewers, but making their dryness the point. Rarely are the minutiae of financial problems given as much focus as here.

Yet those money issues grow exponentially, paving the way for a much darker second movement, inspired by the real-life actions of a famed French producer, who I won’t mention so as not to spoil the viewing experience. While Hansen-Løve's radical shift here takes The Father of My Children into memorable, even uncompromising territory, there’s also a formlessness to the narrative that grows more evident, and the narrative begins to rely on a whole new set of contrivances (family secrets about previous marriages and long lost half-siblings) after it had so eloquently sloughed off its cliches at the outset. Nevertheless Hansen-Løve’s no-nonsense, utterly unsentimental interpretation of the domestic dramedy is a terrific respite from so many films that swat away their characters’ problems with an easy flick of the wrist.