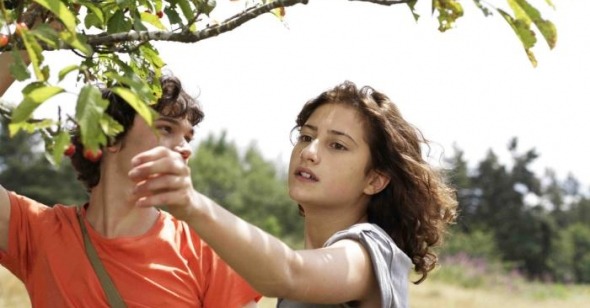 Goodbye First Love, the third feature from Cahiers du cinéma critic turned filmmaker Mia Hansen-Love, resembles her last, The Father of My Children, in several key ways. While the two films tell very different stories, both take a look at the fallout from personal catastrophes (in the new movie, the loss by attrition of a first love; in the older one, the death of a father), with a particular interest in these events as formative experiences for young adults. As time passes, via a steady rhythm of daily business (phone calls, appointments, parties, moping around), grief slowly begins to give way, as it never seemed it would, to a tentative levity. Hansen-Love also takes a loose before-and-after approach to these narratives. The Father of My Children is abruptly bifurcated; her new film spans years (around the turn of the twenty-first century) and drifts along episodically, though it also hinges on an imminent loss, if a less irrevocable one.

In The Father of My Children and now Goodbye First Love, Hansen-Love also employs a distinctly elliptical form of naturalism. But while the flow of the first film seemed impressively effortless, an almost seamless continuum of daily life under a cloud of mourning, the new film after a time shows a bit of strain, despite its successes in depicting the way the mysteries of love waft through and out of adolescence. Hansen-Love is intent on communicating even basics like dates in sidelong ways. In one brief scene a teacher writes the day, month, and year on a dry-erase board; in another the camera just happens to catch the film’s main character, Camille (Bluebeard’s Lola Créton), at her page-a-day calendar. Such a sprawling chronology is rather unwieldy for a film that prefers to linger away from the main action. The whole thing grows ever more diffuse, too. The many shots of Camille doing nothing in particular as her heart slowly mends become, after a while, quite tedious. That is certainly due in part to Créton’s general inexpressiveness. She does not emote much beyond pouting, and we are not shown any hints that she’s not constitutionally dissatisfied; it takes her mother to tell us she wasn’t like this before she started dating Sullivan (Sebastian Urzendowsky).

Hansen-Love foregrounds the movement of bodies through space and time from frame one: as has been the case with two other films at this year’s New York Film Festival (the Dardenne brothers’ The Kid with a Bike, Nadav Lapid’s Policeman), Goodbye First Love in its earliest moments shows us a male riding a bicycle, at peace with himself. In retrospect, this headlong Paris errand seems like an apt enough encapsulation of the character of Sullivan, who professes to love the more studious and introverted Camille with a beatific conviction, but spends significantly more time with his friends—he doesn’t want to become dependent, he claims. So she sulks about Sullivan’s aloofness until he materializes again, often practically out of nowhere (at one point he appears at the window of her bedroom), to assure her of his affection. (Urzendowsky’s protestations are convincing to the viewer, as they are to Camille, though Hansen-Love never really allows the actor to show where, or how, these effusions break through his general callousness.) The lovers are fifteen at the film’s outset, and have been together for a year; both Créton and Urzendowsky play the characters well into their twenties. This is another glaring practical problem posed by the length of the timeline. It’s easy enough to overlook for a while—until the movie calls for its teen lead to do things like lay down the law as the project manager at a construction site.

This is less an issue for Urzendowsky because Sullivan’s activities are mostly bullet-pointed up front: he drops out of school, sells an old-looking watercolor in his possession, and buys a plane ticket to South America, where he and a handful of friends plan to backpack for an open-ended amount of time. Before he leaves, he travels with Camille to her family’s rustic home in an idyllic nook of south-central France, where they pick berries and laze around in the grass—and the schism opening up between them becomes still more palpable. Sullivan goes abroad, and they correspond regularly, until he writes that it’s becoming too painful for him, at which point the letters and phone calls trail off. Hansen-Love fades out, and comes back up—four years later—with an image of Camille sitting on her bed, with the cropped haircut she said she wanted but Sullivan talked her out of getting, living with her mother in a home from which her pipe-smoking father is conspicuously absent. Her parents are now divorced. Hansen-Love has a tendency to apprise the audience of events only in their wake.

Camille is also now a student of architecture, building out models and traveling with packs of fellow budding architects, and working at a nightclub to support herself. She appears to be finally getting over Sullivan, or at least giving up on him. Her developing interest in derelict buildings and solving problems via draftsmanship is less a metaphor for the slow renovation of her own heart than it is a way of showing that she’s gradually regaining interest in the world around her. In time, she falls in love with one of her professors, the much older Lorenz (Magne Havard Brekke), and begins coming into her own as an architect while performing various tasks at his firm. For those who know the most basic details of Hansen-Love’s biography, it will be hard not to take this as a direct statement of her indebtedness to her partner, Olivier Assayas—and hard not to take everything that preceded it as a coming clean of sorts.

But this confessional also makes sure to touch on a variety of common unassailable truths, ones not often expressed with such gentleness on-screen: circumstances change, and so do people; everyday life continues unabated; even the most stubborn grief gradually lessens; from disappointment comes a kind of dignity—for all the small moments of relief and release, Hansen-Love, as the title of her film suggests, poignantly emphasizes the inherent sadness of growing up. After a time, the viewer also might feel a twinge of sorrow that this film, which is often so perceptive about matters of the heart, is finally unable to reconcile its sprawling structure with its elliptical style.