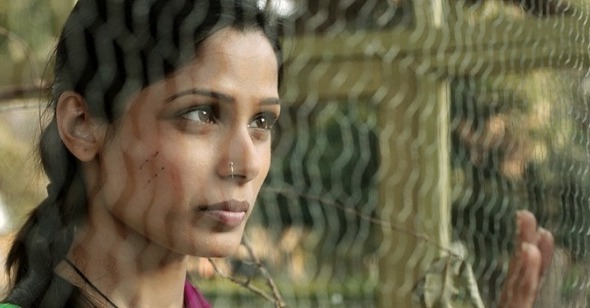 Michael Winterbottom‚Äôs penchant for mining Thomas Hardy‚Äôs prose for inspiration has already resulted in Jude (a grim, straightforward take on Jude the Obscure) and The Claim (which shifted the 1880s-set, Wessex-based The Mayor of Casterbridge to 1860s California). But Trishna, with its geographic and temporal relocation of Tess of the d‚ÄôUrbervilles from pastoral 19th-century England to contemporary India, takes the riskiest leap of the three. The move to South Asia pays dividends, in part because the uncomfortable double standards for rich and poor, man and woman, explored in the novel still hold true there, and in part because Winterbottom freely changes details of Hardy‚Äôs text which do not behoove a modern telling, sometimes in exciting ways, so that the relocation ceases to be the sole point of the adaptation. Unfortunately, even as he makes intriguing alterations in plot, structure, and characters to reflect the new setting without compromising the novel‚Äôs brutal social commentary, Winterbottom is ultimately unwilling to commit fully, slinking back to his source‚Äôs melodramatic finale when on the verge of creating a work that stands alone.

In Hardy‚Äôs novel, Tess is a pretty and hard-working girl from Wessex whose prospects with Angel, a preacher‚Äôs son and aspiring farmer, are imperiled by his disgust with the fact that her maidenhood was taken, forcibly, by her former boss, new-money libertine Alec. In Winterbottom‚Äôs film, Trishna (Freida Pinto) is a bright but inexperienced girl from a remote part of Rajasthan whose life is forever altered by a road accident that leaves her father unable to work, and a subsequent job offer from Jay (Riz Ahmed), an Anglo-Indian hotel heir who met Trishna while on a hash-fueled tour of her country with his rich friends. Unlike the frankly opportunistic Alec or the well meaning if judgmental Angel, Jay is not just villain or hero so much as neither and both. An amalgamation of the two men, his relationship to the Tess of this story is a complex blend of good intentions and flawed, ever worsening decisions.

When Trishna goes to work at a hotel owned by Jay‚Äôs father (Roshan Seth, a stalwart of both Bollywood and British cinema), it gives Jay the opportunity to whisk her into the secluded woods one night for a tryst left smartly, infuriatingly offscreen. It is thus unclear how willing a participant Trishna is in this fateful event; there is something predatory about Jay from their first meeting, but the girl clearly desires him on some level as well. The cause of her tears afterwards is more ambiguous than those of Tess in the Hardy novel; Trishna might be upset at what was rape, or a more general sense of having been taken advantage of, or simply guilt at having given in to temptation forbidden by her chaste upbringing.

While Tess lived in a world where any premarital relations (consensual or otherwise) were considered wholly unacceptable, Trishna lives in a time when India‚Äôs diverse cultural patchwork, due in part to gradual, jerky moves into the industrialized world economy, means sexual congress for unmarried couples is not so universally taboo. After that dreamy-turned-nightmarish meeting in the woods, Trishna‚Äôs conservative morals return to the fore and she runs away to her family to deal with the aftermath of her seduction, but Jay tracks her down, says he can‚Äôt stop thinking about her, and suggests she come with him to Bombay to be his live-in girlfriend. In the big city her decision to be with Jay without marrying is relatively free of outside judgment, but she can‚Äôt escape her own, nor the issues caused by the inherent social and financial inequality between them, particularly present in a society still cognizant of caste. Trishna seems ever aware of this imbalance while Jay is either blissfully or willfully naive of it. It is never easy to determine if Jay‚Äôs eventually horrifying actions are a result of him simply being a much less beneficent person than he initially seemed, or the tragic result of his rank obliviousness to the dangerous ramifications of their power dynamic.

Trishna works most credibly as a study of how foolish but initially harmless behaviors can lead to outright abuse. Jay sees himself as Trishna‚Äôs protector, but once having rescued her from the distress he himself helped create, starts to develop controlling tendencies (while in Bombay he insists to friends that Trishna, a talented dancer, would never want to become a professional without ever actually asking her) that eventually blossom into feelings of ownership. When Jay learns he must return to Rajasthan to look after one of his ailing father‚Äôs properties, he informs Trishna that their brief urban honeymoon is over but that she could continue to be with him at the rural hotel under the guise of, once again, his employee. The regression of their relationship from one with the illusion of equality to one that is undeniably, irreparably unbalanced triggers a downward spiral in Jay‚Äôs treatment of Trishna that she feels powerless to fight because of ingrained feelings of inferiority and a burdensome debt to him.

The power issues run deeper in Winterbottom‚Äôs film than in Hardy‚Äôs novel because they are not just socioeconomic and gendered; Jay is half-British, raising additional questions of race and postcolonial identity. While the bulk of the film creates an uncomfortably realistic descent from star-crossed romance to Trishna‚Äôs imprisonment by obligation and dependence, both characters take a jarring turn in the final act that does not seem a logical extension of the previous trajectory. (One climactic bit of violence is even bewilderingly intercut with shots of Trishna‚Äôs younger sister reciting a kind of pledge of allegiance at school, the one time that Winterbottom loudly broadcasts the parallels lurking between Jay and Trishna‚Äôs relationship and India‚Äôs current social and political struggles.) This abandonment of better reasoning in favor of going back to Hardy's novel not only damages Trishna‚Äôs success as a fully realized film, but also undoes much of the characters‚Äô hard won pathos.

Trishna and Jay‚Äôs relationship is meant to serve as an implicit allegory for India‚Äôs industrial growing pains, and it largely succeeds as such, thanks to Winterbottom‚Äôs admirably obsessive and clearly researched detail work. Having grown up in India, I can vouch for the uncanny authenticity of the locations, accents, and nuanced social interactions, qualities that are often distractingly off-key in films set in India directed by Westerners. From tiny rural villages to grand Mughal palaces-turned-hotels, to a Bollywood sound-recording session, Winterbottom‚Äôs sense of India is pitch-perfect. With the help of lush (but not fetishistically so) cinematography from Marcel Zyskind, these places feel like heightened reality rather than either an excessively gritty or glamorously stylized film set. At a time when the depiction of India by white male directors usually continues to deal in clich√©s of either happy poverty, with the neo-Victorian noble savage living in a world of swirling colors that white people can visit to get their groove back (The Best Exotic Marigold Hotel, or the truly unbearable Eat Pray Love), or scary poverty in which all of India is made to look like one writhing hovel (Slumdog Millionaire, the film that made Pinto a star), Winterbottom paints a recognizably diverse, complex picture of a country that is, of course, both beautiful and chaotic, neither heaven nor hell. This is not only refreshing in and of itself, it subtly mirrors ideas of an ungainly socioeconomic gap and Indian-on-Indian culture clash he explores within his film‚Äôs central relationship. If only his characters had continued down a path so true.