The Killer Inside Me 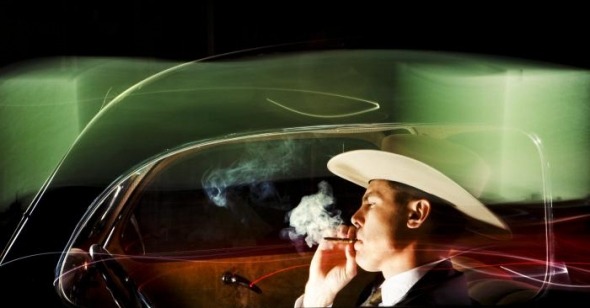 The Killer Inside Me
Dir. Michael Winterbottom, U.S., IFC Films

Observers of Michael Winterbottom’s hyperactive career have always struggled with the question of authorship, wondering whether the tireless British director, an almost frustratingly nimble change-up artist seemingly comfortable in every genre, has a verifiable artistic signature, or if it even matters. His sleek new Southwestern retro-noir The Killer Inside Me, an arrestingly acted, often sensationally disorienting, mostly bang-on adaptation of Jim Thompson’s chilly 1952 pulp novel about a small-town lawman with incomprehensibly psychopathic impulses, raises more of these pesky auteurist questions than it answers. Working from a script by John Curran, Winterbottom hews closely to the book’s first-person narrative, drawing us into the Manichaean mind of a deranged young West Texas sheriff with unapologetically dogmatic faith in the power of Thompson’s words, dialogue, and personal vision. Abandoning the freewheeling ingenuity of his previous period adaptations (Jude, The Claim, Tristram Shandy), as well as the frenetic pacing of docu-realistic dramas like In This World or A Mighty Heart, Winterbottom’s latest effort, though enthralling on the whole, sometimes feels too literal for its own good.

In the mid-fifties, post-boom town of Central City, exceedingly well-mannered Deputy Sheriff Lou Ford (Casey Affleck, who’s rarely been better than as this smiling, silver-tongued cipher) is dispatched to the home of voluptuous call girl Joyce Lakeland (Jessica Alba, here mostly to loll in bed and take a whipping). Lou’s avuncular boss and friend, Sheriff Bob Maples (Tom Bower), wants him to size her up and run the gal out of the county if he sees fit. (The local preachers are raising a stink.) Joyce accosts Lou when he produces his badge, and a few hard slaps later, he loses his cool and gives her a vicious, bare-assed belt whipping. She likes it, Lou is hooked, and their rendezvous arouses some inspired bedroom passion. As their illicit affair heats up, Lou’s desire for sweetheart blonde Amy Stanton (Kate Hudson, passably miming a tough-tender Southern belle) tapers off, but he’s too infernally polite (and far too calculating) to break it off. Maybe he doesn’t even want to. Amy comes from good stock, and Lou’s all about clichés and surface appearances.

The colder, scheming side of his personality emerges when Joyce suggests they skip town together. She’s been frolicking with Elmer Conway (Jay R. Ferguson), the dopey spoiled son of local tycoon Chester Conway (Ned Beatty), and wants to pump the lovesick cad for money so they can gild their getaway. Unbeknownst to Joyce, union lawyer Joe Rothman (Elias Koteas, in a refreshingly shifty turn) has recently fed Lou some unsavory information about Chester’s alleged involvement in the death of Lou’s foster brother, known locally for molesting a five-year-old girl, six years before. Chester, meanwhile, has arranged for Lou to chaperone Elmer to Joyce’s house with a $10,000 get-the-hell-out-of-town payoff. He doesn’t want his son messing with a lady of ill repute. A plan materializes in Lou’s head that we aren’t fully privy to until, in a pivotal and controversial scene, he batters his lover into breathless pulp and then waits for Elmer to discover the gruesome mess before plugging him with Joyce’s handgun. It gets far knottier for Lou after the disguised double murder, and eventually bloodier as he labors to conceal his tracks from District Attorney Howard Hendricks (Simon Baker), who’s sniffing around, but the wicked sheriff hasn’t covered every angle.

For his first American feature (the film was shot on location, mostly in and around tiny Guthrie, Oklahoma), Winterbottom and frequent DP Marcel Zyskind skillfully nail the noir mood and 1950s period detail without vacuously emulating the genre’s most recognizable features (see Road to Perdition), outfitting the soundtrack with jauntily ironic Western swing by the likes of Bob Wills and Spade Cooley (a convicted wife beater and killer whose lyrically creepy “Shame on You” is suggestively warbled by Lou and Bob Maples in a driving scene). He also coaxes a louche, low-key performance from Affleck, whose cracking, half-whispered, eerily hypnotic drawl (“the thing about small towns,” he says when the film opens, is that “everyone thinks they know who you are”) makes the voiceover an effective lever for numerous set-ups, as well as a psychic temperature gauge. Affleck’s Lou Ford, like Thompson’s ingenious narrator, has two natures that are wrasslin’ with each other in his overcooked, criminally clever noggin. He loves; he destroys. He seems capable of empathy one moment (offering to check up on Greek café owner Max’s wayward son Johnnie Pappas), yet has monstrously sadistic impulses the next (crushing a lit cigar into a bum’s outstretched palm) that he can’t seem to explain, even when he tries. “I got one foot on both sides of the fence,” he confides to Johnnie, who he coldly betrays at a key moment, “and there’s nothing I can do about it. Just wait until I split . . . right down the middle.”

It’s a perfect metaphor for Winterbottom’s own conflicts as master of ceremonies. Having stirred up bad publicity at its Sundance premiere for its protracted scenes of queasy, face-battering violence, Killer arrives after a media kerfuffle that the director has struggled, a bit quixotically, to dispel. Winterbottom, a conscientious director drawn to stories of marginal characters and trenchant sociopolitical themes, adheres to a certain strain of Rossellinian realism that has served him well, especially on films like Wonderland and The Road to Guantanamo. He is interested, above all, in bringing verisimilitude to his work, which routinely incorporates documentary techniques. But the literalization of such shocking brutality in Killer, impressive in its utter disregard for spectatorial pleasure, seems as misguided as the long bouts of unsimulated rutting in Winterbottom’s deadly boring 75-minute art-porn experiment 9 Songs, the cinematic equivalent of a bad lay. It isn’t a question of whether horrific violence (against women, especially, but also soldiers, children, animals) belongs in a serious dramatic artist’s repertoire, but whether rubbing our noses in it really forces us to think anew about what we’re willing to witness as an audience, about how and why the grisly sight of an innocent young woman having her face bashed into raw meat should repulse us. The responsibilities of that decision seem to have escaped him. Realism for its own sake is not tantamount to truth, and the consistency of his credo does not automatically equate with purity of purpose.

On a structural level, too, Winterbottom struggles to make the film cohere at times. His self-admitted reluctance to alter the basic contours of the existing text (odd considering how playfully he reconfigured Tristram Shandy, but not entirely surprising for a filmmaker loathe to repeat himself) conflicts with his need to translate what’s essentially a cunningly written interior monologue for the screen. Following Thompson’s lead, Winterbottom allows Lou’s motives to remain curiously opaque in The Killer Inside Me, notwithstanding occasional hints at early-childhood trauma and sexual conditioning, glimpsed in brief, provocative flashbacks. Though criminal psychology in the movies need not be fully explicable or accessible to reason (David Fincher’s Zodiac is prima facie evidence), those unfamiliar with the book may find these teasing subconscious bulletins (such as when Lou finds old smut photos tucked into his late father’s Holy Bible, which triggers memories of an erotic spanking session with a naughty maid) more puzzling than salaciously gratifying or informative. Winterbottom’s dogged efforts to remain utterly faithful to the novel results in the layering of subnarratives (around the molestation incident, for instance) that are too thinly adumbrated to amount to much more than a jumble of psychic fragments. Other details about his family history, hinted at in voiceover or verbal exchanges, are sketchy at best. We only know Lou is disturbed, that he carries the murky past with him in some form, and that he’s aware how a lack of definitive self-knowledge (“I started needling people, I don’t know why—It must be about something else”) feeds his inexplicable desire to kill, or what Thompson’s confessional narrator calls “the sickness.”

Drawing to a close as abruptly as Robert Aldrich’s Kiss Me Deadly, another noir that ends in a nihilistic conflagration, The Killer Inside Me is a heady, atmospheric film, often maddeningly so, and it’s certainly less fun than Stephen Frears’s The Grifters, perhaps the best of the Thompson adaptations. Still, Affleck’s cool, mesmeric embodiment of malice warrants attention, as do the colorful efforts of numerous bit players, like craggy character actor Tom Bower and Bill Pullman, who injects energy into his brief role as a crazily brash, good-ol’-boy lawyer who springs Lou from a nuthouse. We’ll be seeing more from Michael Winterbottom very soon (next up is The Promised Land, a drama set in the early days of the Israeli-Palestine conflict), and we’ll be expecting more too. His body of work is a mixed bag, to be sure, pulsatingly vivid and morally engaged when it’s good, too adventurous and daring even at its most lackluster to ignore.