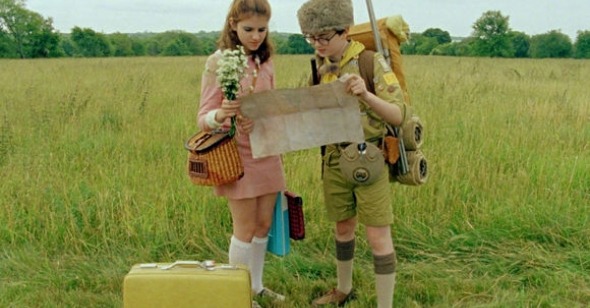 A Keepsake
By Elbert Ventura

Seven movies into Wes Anderson‚Äôs career, the arguments rage on but the opinions have settled: you know by now where you stand on the matter. Love him or hate him‚ÄĒand there seems to be little in between‚ÄĒonly the churlish would deny him credit for bringing back something of the old cinephilia. It‚Äôs not so much his foregrounded auteurism or movie-mad aesthetic that I‚Äôm talking about, but his status as a flashpoint. In a time when mainstream critics can gaze upon the remarkable last year and a half in movies and offer little more than a shrug, Anderson makes for a welcome antidote to ambivalence. He inspires the kind of partisanship that was more common when Anderson‚Äôs New Wave and New Hollywood heroes roamed the earth.

But to say we‚Äôve made up our minds on Wes Anderson is not to say we‚Äôre done wrestling with him. Because he has been so influential‚ÄĒnot just on other filmmakers but also on the wider culture, he is a uniquely difficult artist to put in perspective. The cacophony of opinions he inspires can drown out your own thoughts. Just the release of the Moonrise Kingdom trailer set off impassioned reactions from both sides. In the context of such contentiousness, the movie itself almost feels like a rejoinder to critics‚ÄĒan artist doubling down on the very thing that drives the haters batty. But in the clear light of day, Moonrise Kingdom reveals something else: an artist who could care less about what we think‚ÄĒand who couldn‚Äôt do anything about it even if he did.

From its first frames, Moonrise Kingdom is unmistakably Anderson‚Äôs. The dollhouse staging, cartoon costuming, frontal compositions, and quirky bric-a-brac are all here. No less Andersonian is the fantastical setting, the island of New Penzance, somewhere off the New England coast. A narrator (Bob Balaban) sets the scene: September 2, 1965, three days before a famous hurricane that wallops the island. Against this ominous backdrop, Anderson tells a classic lovers-on-the-run story, with a twist‚ÄĒthe lovers, in this case, are twelve-year-olds. The boy is Sam, an ‚Äúemotionally disturbed‚ÄĚ (so say his foster parents) misfit who runs away from his Khaki Scout outpost on the island. The girl is Suzy (Kara Hayward), his epistolary squeeze and fellow pariah, who yearns to escape her unhappy parents (Bill Murray and Frances McDormand). Sam has brought the maps and the camping gear; Suzy comes equipped with binoculars and a suitcase full of books. On the lovers‚Äô trail are the scouts of Camp Ivanhoe, led by Scout Master Ward (Edward Norton) and Captain Sharp (Bruce Willis), the island‚Äôs only cop. The chase, as you may have predicted, climaxes during the storm, at a church no less, where the townsfolk have gathered for a production of Benjamin Britten‚Äôs children‚Äôs choir favorite ‚ÄúNoye‚Äôs Fludde.‚ÄĚ

The collision between unruly nature and Anderson‚Äôs hyper-control‚ÄĒnot to mention the young-adult adventure-book vibe‚ÄĒmost readily recalls The Life Aquatic with Steve Zissou. But if that movie saw Anderson stretch his sensibility to epic proportions (and to mixed results), Moonrise Kingdom brings a more intimate and handmade experience. Anderson here shows a greater degree of spontaneity, mirroring the resourcefulness of the couple on the run. Not that he‚Äôs shaken off his famous fastidiousness. Moonrise Kingdom brims with the kind of detail that has become Anderson‚Äôs calling card. Beyond the OCD art direction are behavioral flourishes that humanize his creations: the way Sam absent-mindedly presses on a water fountain button as he walks by it, or Suzy‚Äôs delightful ‚ÄúOh, thank you!‚ÄĚ delivered mid-sentence when Sam hands her a bouquet of flowers.

In an interview with Dennis Lim, Anderson divulged that as a boy he once found a pamphlet on top of the family refrigerator: ‚ÄúCoping With the Very Troubled Child.‚ÄĚ No less a projection of its maker‚Äôs boyhood than Hugo was for Scorsese, Moonrise Kingdom is a valentine to the child outcast‚ÄĒand an undiluted expression of his singularity and innocence. In strange, geeky Sam, Anderson has found his ideal avatar (and in Suzy, his boyhood crush). One can easily see him as Max Fischer in a few years; his conversations with Capt. Sharp, who is touchingly free of condescension, anticipate Max‚Äôs friendship with Herman Blume. Life Aquatic featured one of the most revealing exchanges in all of Anderson‚Äôs movies: ‚ÄúIn twelve years, he‚Äôll be eleven and a half,‚ÄĚ says one character of her unborn child. Steve Zissou responds, ‚ÄúThat was my favorite age.‚ÄĚ Moonrise Kingdom is the feature-length elaboration of that sentiment.

The movie is the director‚Äôs tightest. Cowriters Anderson and Roman Coppola eschew here the deus ex machina that marred Anderson‚Äôs past movies, particularly Life Aquatic and Darjeeling Limited. In each of those films, a late-act tragedy, accompanied by a pop gem, felt rote‚ÄĒWes doing Wes. (Blessedly unadorned by a hipster mix tape, Moonrise Kingdom relies mainly on classical music cues, most prominently Benjamin Britten‚Äôs ‚ÄúThe Young Person‚Äôs Guide to the Orchestra‚ÄĚ and ‚ÄúNoye‚Äôs Fludde.‚ÄĚ) The epiphanies here never seem unearned. The Anderson formula of simple syrup spiked with acid finds breathtaking expression here. Out of the mouths of babes: when Suzy tells Sam that she always wished she was an orphan, the parentless Sam tells her bluntly, ‚ÄúI love you, but you don‚Äôt know what you‚Äôre talking about.‚ÄĚ Suzy responds, ‚ÄúI love you, too.‚ÄĚ And there is melancholy, too, not least in the heart-swelling final shot, at once a paean to and dirge for what we all must leave behind.

Set in the year Pierrot le fou, a seminal lovers-on-the-run movie, was released, Moonrise Kingdom is, as is typical of an Anderson film, a trove of movie references: the kids‚Äô wilderness sojourn evokes Badlands (including a dance to a pop song in the middle of nowhere); the escape into a fairy tale wilderness recalls The Night of the Hunter (is it just me or is that right-to-left tracking shot late in the film‚ÄĒafter an entire movie of left-to-right moves‚ÄĒa nod to the same pivot in Charles Laughton‚Äôs masterpiece?). But the movies this reminds us most of are Anderson‚Äôs. Writing for Mubi, Ignatiy Vishnevetsky perceptively noted that Moonrise Kingdom is ‚Äúa miniature of the director‚Äôs whole body of work.‚ÄĚ Far from being unbearably hermetic, the movie finds Anderson disappearing deeper into his dollhouse‚ÄĒand making his strongest picture in a decade.

Moonrise Kingdom is the work of an artist who either is oblivious or doesn‚Äôt care about his polarizing status. The demand, from even some supporters, was to grow up. Instead, he followed up a stop-motion animation film‚ÄĒthe terrific Fantastic Mr. Fox‚ÄĒwith a deeply felt tribute to adolescence. (Little did we know that the less successful Life Aquatic and Darjeeling were his stabs at growing up.) Moonrise Kingdom is familiar, there is no question, but Anderson comes by his repetitions honestly‚ÄĒhe might not know any other way to make movies. But there is no calculation here; style has not calcified into shtick. This is who he is, and who he‚Äôs always been.