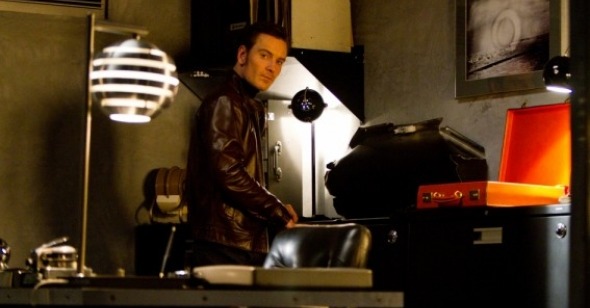 The things we do for movie love: I haven‚Äôt checked in with the X-Men franchise since 2003‚Äôs X2, which I found to be as ‚Äúmeh‚Äù as 2000‚Äôs first installment, only a half-hour longer and with the gay suprasubtext taken to a few hilariously limp-wristed extremes. (‚ÄúWe love what you‚Äôve done with your hair,‚Äù sayeth the ham McKellen, scaly-blue fag hag Mystique at his side, to Anna Paquin‚Äôs Rogue.) Would that I believed in the defiant queerness, but like all of the movie series‚Äô shout-outs to human rights struggles of various stripes‚Äîwith the mutants as ever-present minority‚Äîit just came off as a sop to significance in-between all the bustling and deadening special effects. By the time Brett Ratner, the Cobra Commander of crass √ºber-hacks, took over from Bryan Singer for 2006‚Äôs X-Men: The Last Stand, it was easy for me to decide to spend my money elsewhere. Ditto 2009‚Äôs X-Men Origins: Wolverine (from the guy who made . . . Rendition and Tsotsi!?).

So why my interest in X-Men: First Class? Two (lasciviously pronounced) words: Michael Fassbender. And not just because his re-chiseled, post-Hunger torso made Fish Tank‚Äôs faux-kitchen-sink inanity bearable. With his perfect mix of presence and essence, he‚Äôs blessed with something more elusive: he‚Äôs a star and an actor. (Best. Rochester. Ever.) And dammit, he gives a performance in First Class as the intense, vengeful, and significantly de-gayed Erik Lensherr, a.k.a. Magneto. He‚Äôs fairly exhilarating when doing his ‚ÄúSimon Wiesenthal: Nazi Hunter‚Äù act in the film‚Äôs first third (even though here the character seems to be enacting a wish-fulfillment reprise of Fassbender‚Äôs doomed critic-cum-spy arc in Inglourious Basterds). A scene set in a tavern, where Mags kills two of the men who oversaw his concentration camp imprisonment, is like a B-side to Tarantino‚Äôs film‚Äîthough Matthew Vaughn‚Äôs direction is strictly ballooning-budget Z-grade.

Fassbender tries all the way through, even when donning that ridiculous metal helmet. Perhaps he‚Äôll prove to be the straight male version of Joan Crawford, giving his all whether doing Mildred Pierce or Trog. If only First Class was Trog-level bad; instead, this prequel pastiche of origin story superheroics and 1960s espionage cinema is just missed-opportunity dull at best and outright offensive at worst. Laziness abounds: the period trappings are bare-minimum signifiers placed against green-screen‚Äîwe never feel like we‚Äôre in a persuasively realized place. The cast is mostly wasted, from high-billed ing√©nue (say it in your best Don LaFontaine: ‚Äú‚Ä¶with Academy Award‚Äìnominee Jennifer Lawrence!‚Äù) to day player (a jaw-dropping procession of ‚Äúthat guy‚Äùs: James Remar, Oliver Platt, Ray Wise, Michael Ironside, Rade Serbedzija). And the small army-essayed F/X are almost always shoddy. Digital fire should be banned from all movies henceforth.

I‚Äôm also not the only one to have noticed First Class‚Äôs most egregious edit, which occurs after big baddie Kevin ‚ÄúSlice It Thick‚Äù Bacon tells the young mutants that unless they join his world domination lollapalooza they‚Äôll all become slaves: cut to and hold on black X-Man Darwin (poor Edi Gathegi, given the token-negro bum‚Äôs rush). It‚Äôs bizarre to me that no X-Men film has been able to resonantly, or even convincingly, address the real-world conflicts that have affected humanity and continue to shape it. I don‚Äôt think this is a problem of genre; rather, something‚Äôs off in the creative nitty-gritty. There‚Äôs a presumption on the part of the filmmakers that, since X-lore is such a widespread commodity, all the parallels to human huddled masses will take care of themselves. The contradictory comic-book movie moral: Don‚Äôt mess with the mythos, but make it multiplex-palatable. ‚ÄîKU

Nice spot on that cut, Keith. I think it‚Äôs exactly that kind of edit, and the simplistic overall conception of the material, that underlies much of what plagues X-Men: First Class, and, I have to assume, the other entries in the series (this was my first foray into mutant lands‚Äîthe things we do for movie love, indeed). Here we have a group of films predicated on an ongoing narrative exploring the complicated relationship of a group of enhanced ‚Äúothers‚Äù with the cruel forces of normativity. Some of these ‚Äúothers,‚Äù fearful of the mainstream‚Äôs innate distrust of them, decide to wage war on the normals and rule the world like kings‚Äîfor them, the mutants shall inherit the Earth. The other ‚Äúothers‚Äù acknowledge their superiority to regular humans, but choose to work with them and living amongst them, looking forward to the day when everyone, mutated or not, will live in harmony. All mutants constantly and solemnly remind themselves, and each other, about their differences, about how special their powers are, and how those powers are the very bedrock of their unique identities.

So if they‚Äôre all such special individuals, why is it that X-Men: First Class boils the majority of its overstocked cast down to a collection of circus tricks? There‚Äôs the guy who can shoot fire out of his chest; the guy who looks like the devil and can teleport; the guy with monkey hands for feet who runs real fast; the guy who screams; the girl with wings; et al. I think I‚Äôve seen most of them at the New Jersey State Fair. We don‚Äôt learn much about any of these folks, and if it weren‚Äôt for Fassbender stepping up in a game attempt to give this ridiculousness some heft, the whole thing might just float away. I‚Äôm told the comic has the feel of a saga in which each of the many characters is fleshed out slowly over time. The confines of a feature film, even a bloated plot-heavy one, may not be the appropriate place for more than one superhero birth narrative‚Äîthis thing might have been doomed from the start.

But the film‚Äôs failed dramaturgy (rarely does a film focus so much exposition on all the wrong bits of the story it‚Äôs telling) may not be the worst offense. By now we‚Äôve grown accustomed to the weightless, grainy feel of panoramic digital effects making. Where once physical objects were built in space and put under lights and before a camera, now a large-scale rendering is done with the click of a mouse. Thus X-Men: First Class provides us a patently fake, computerized copy of Moscow‚Äôs Red Square populated by thousands of imaginary extras. In the movie‚Äôs showstopper moment, in which Magneto lifts a submarine out of the water and crashes it onto shore, Vaughn places the ‚Äúcamera‚Äù so that the sub appears to be falling towards the audience, yet there‚Äôs no sense of danger, no reason for the audience to recoil‚Äîthey‚Äôve had enough time to look at the boat‚Äôs clearly poor shading, and watch digital trees crumple before it like so much tinfoil. ‚ÄîJR