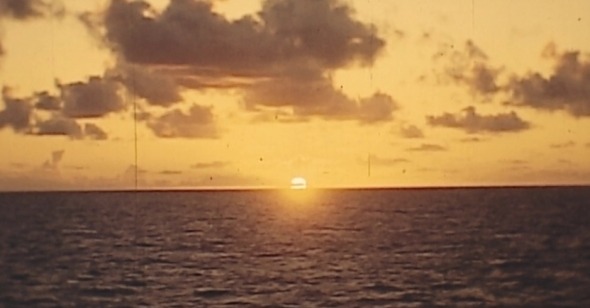 Invisible Work:
A Conversation with Courtney Stephens
By Matilda Hague

Courtney Stephens’s film and live performance Terra Femme tries to identify the female gaze, or at least aims to question if there is such a thing at all. By weaving together archival amateur travel footage shot by women in the early 20th century, Stephens gives us insight as to what they attempted to capture along their journeys. A flower blooming overnight, a woman gathering water at the well or the soft shifting of waves on the horizon: these Western women’s attention to detail allowed them to notice life without the need to craft narratives out of them. Many of these images have an ethnographic quality, but they’re able to steer away from exercising dominance over the people and the landscapes they shot. Stephens describes the footage captured by antiquarian Carry Wagner as “anti-monumental,” and interested in the “in-between places.” What were these women eager to show the world? And in so doing, weren't they eager to make visible their own existence?

A writer/director of nonfiction and experimental films, Stephens frequently works with archival footage. She was recently awarded a Guggenheim fellowship and she was also the recipient of a Fulbright Scholarship in India. Stephens has been touring with the film over the world for several months now, and she came to Mexico City in March to present it at FICUNAM. I went to see her performance at Ciné Tonala, where she recited the film’s narration live from the side of the stage while the film was projected behind her. I connected with Stephens a week after she had left Mexico City to speak further about her film. Stephens will appear in person for live performances of Terra Femme Thursday, September 15, and Sunday, September 18 at Anthology Film Archives in New York City.

Reverse Shot: When I wrote to you about your performance, you recalled the technical difficulties that occurred during that screening, in which the theater’s playback computer froze several times during the live performance. I wonder if you have had different types of experiences showing this “live” film, and whether those technical “difficulties,” you consider part of the performance in some way?

Courtney Stephens: What constitutes “liveness” at a film exhibition can vary these days, I guess [laughs]. Maybe tech bugs do get us closer to a kind of living presence, like the projectionist who choreographs the dimming of lights and the opening of curtains and the arrival of the image. The broken laptop interrupts the flow of automation. My own impulse to present the film live definitely isn’t the hope that things go wrong, and it made it hard to keep the timing on course that night, but it gave the night some friction which was I think productive. Screening limitations can be kind of soothing I think, at least for me. An outdoor screening where the screen is blowing a bit, or the wind is drowning out some of the speech, is not the worst thing. I’ve narrated the film in a lot of different spaces now, and I have a sensitivity to how architecture and scale also affect the way it plays live. That night turned out to be a really nice one. The real thinking behind doing it live is to challenge the convention of the disembodied voice, to embody it. People were engaged and encouraging, and that felt better than some of the larger spaces in which I’ve presented, where the film is happening at a distance. This felt like we were really sitting together.

RS: Coming back to this idea of embodying the voice, I’m interested in tying this idea of invisibility back to the recurring motif of the weaver in your film, as well as to the role women historically occupied in film, and which also seemed a lot more invisible: the role of editing. It was a kind of sewing, more physical work. I’m reminded of the mythological character of Penelope, and I’m wondering how you might associate it with the film.

CS: Penelope! There was a whole part about Penelope in the film, but people kept confusing her with Persephone, who is also mentioned, so Penelope went. Which is a shame because she’s so crucial in the mythology of women and travel. Without the anchor of Penelope as the figure of home, but also of homeland, Odysseus’s journey loses its meaning. As far as invisibility, well women’s work is often invisible because it takes the form of the world itself; of human beings who have been raised, of neighborhood yards. I think I kind of grew up with that masculine mindset around achievements and visibility rather than the subsuming oneself into the maintenance of the world. In a way I would say this film is reckoning with that for me on a personal level, of looking at these women who were lower-case-f filmmakers; who were operating in this medium, but anonymously, many of them. I think I am working through traditional aspects of female identity. I understand the Greek conception of the fates, who were meant to be weavers, as the work of bringing the world into being. It’s the weaving of time rather than geography. So, this goes back to your image of the editors, threading together seconds and minutes.

However, some of the challenges of working in these archives is the complexity of dredging them out of invisibility. To what extent should private documents be subjected to current critical paradigms? As films intended for an audience of the filmmaker’s close community, can they be understood as “documentary”? They certainly encode things like power and bias and capture world events—and for these reasons they appear to operate outside the private sphere, in proximity not only to the public but also to the historic. But that doesn’t mean they had or have a public statement to make. So as much as putting them under the light is appealing, I have an impulse to want to keep them a little buried and to insist that their burial has something to say about a different kind of filmmaking, that is about doing autobiography that uses the world as the medium, invisibilizing the female artist as an active thing, rather than an erasure. It’s a way of getting to know oneself.

RS: Coming back to this idea of you, the weaver with your spools of thread (reels of film), I’m curious as to whether or not things had to come undone? Going back to this question of something that is invisible, I’m eager to shed a light on maybe something that was part of your process that didn’t make the cut. Maybe it’s a rabbit hole you went down that just didn’t work out or if there was a whole tapestry that you sewed and had to unsew?

CS: Oh, big time. I spent five years making other versions of this film, which combined some of this material with my own footage from India. One contained a fictional storyline about a woman giving birth in secret. Another relied almost entirely on 19th-century diaries and letters. But I was always trying to place myself at the center of them and it never felt comfortable. This film was born from the ashes of those other films. I think I grew by letting all those ideas die and then giving away so much of the authorship. To not try and be a protagonist, and instead to simply wonder after the lives of others. It comes more naturally to me I think—to let the experiences of others stand in for my own.

RS: It seems like the film’s images are also patterns or colors of something being woven.

CS: Yes, and celluloid and material existence. Objects that survived. In the film I wonder if film is something like the physical life of time, which is so different than narrative or drama. The films present a simple truth: you can only ever film the present moment. These weren’t memories when they were filmed, they were experiences. Take the sequence in the film of a night-blooming Cereus flower, documented over its single night bloom. I wanted there to be room for footage like that, which captures something we can never really know about the interior life of the person filming. The ways she spends time, what delights her. The ways we change through the accumulation of minor experiences. The minor hero. The minor hero's journey.

RS: I’d like to come back to the first journey you mention in the film, which is not a physical one, in which explorers disappeared during an Arctic expedition and clairvoyants were “sent” to go looking for them. You mention that in the 19th century, women could probably only have traveled there virtually. This reminds me of Ursula K. Le Guin’s book Changing Planes, in which the main character travels between planes. From an anthropological point of view, the collection of short stories narrates her encounters with distant planes, their inhabitants, and their customs. We were just talking about the materiality of film and the physical aspects of voyage, but I’m wondering if now you could tell us a bit about the virtual.

CS: Well, the whole idea of virtual travel is really addressing film and cinema. A lot of those clairvoyants reported details of the Arctic that could be traced to panoramas and other pre-cinematic technologies that circulated in London at that time. Media is at the center of it. And the ethical questions the surround early travel media, including 19th-century travel literature, are closely related to the questions of representation that hang over documentary today. What is the nature of your visit? What does foreign observation do to a subject, to a community, to a place? In the Le Guin stories, some of the “planes” of visitation are so delicate that you can tear right through them just by trying to go there. It’s never made clear if the “tearing through” is a byproduct of the visitor being from a world of mass, or if it’s a problem of sensibility or something else. But the warning seems to be that gazing can destroy, that the world is held together by more tender bonds than what we see.