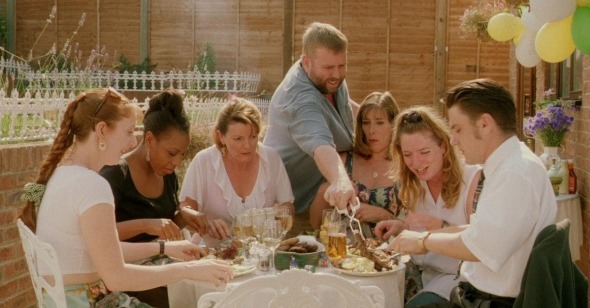 Open Range:
An Interview with Mike Leigh
By Dan Schindel

Among contemporary cinema’s foremost realists and humanists, Mike Leigh has been directing movies for more than five decades. His films run the gamut from depicting struggling working-class people to visiting the everyday of the comfortable middle-class to portraits of historical figures. They all share a similar spirit, which comes from Leigh’s unique production process, featuring months-long periods of rehearsal and workshopping during which he collaborates intensively with his actors to turn vague premises into full-fledged stories. The result is meticulous yet organic storytelling, with each moment following fluidly from the previous. Every line feels spontaneously spoken rather than memorized and recited.

This method has been refined in its specifics while remaining consistent over the decades. As a result, considering Leigh’s movies in sequence reveals less a grand evolution than it does a continual expansion. He’s been dissecting English society in a comparable way to Frederick Wiseman’s scrutinizing of America within a nonfiction mode. (They’ve even operated over roughly the same time span.) Both filmmakers can be relied upon to deliver in a familiar rhythm, yet the specifics of what they find provide something fresh and intriguing each time.

Film at Lincoln Center recently began a retrospective of Leigh’s theatrical features, Human Conditions, which includes eight recent restorations of works like Naked, Topsy-Turvy, and Meantime. A few days after he arrived in New York, Leigh spoke to me over Zoom about the series and the opportunity it provides him to reflect on his career. As usual in his interviews, he was blunt in his language but thoughtful in his sentiment.

Reverse Shot: You had a similar, even more comprehensive retrospective at the BFI a few years back. How do events like this make you feel?

Mike Leigh: It's good. Apart from anything else, thousands, millions of movies have been made and got lost and nobody ever thought about them again. It's brilliant that that isn't the case [for mine]. For a long time, I regretted that a number of my films seemed to have got lost and no one had seen them. And gradually they've all cracked back. The experience at the BFI was great because they showed everything, including my television work, and the best thing was that there was a large proportion of young people in the audience. And I have this sort of privilege, in that I've never made a film I didn't really like. I know lots of directors who about this, that, or the other movie will say, “I can't bear to watch it, I don't want to ever see it again.” And it's because they were interfered with, or they couldn't cast who they wanted, or the producer fucked up the end, or whatever. And I'm lucky in the sense that nobody's ever interfered, and I made the movies I wanted to make.

RS: That’s interesting to hear about young people turning out. I find that people my age really respond to Happy-Go-Lucky. For a lot of us, it was the first film of yours that we saw. I think we see Sally Hawkins’s character as sort of aspirational.

ML: The important thing, I think, is her positivity, isn't it? It's good to hear that. It was a good place to start, definitely.

RS: A friend once told me she loves the movie, but that it depressed her because she felt confronted with this question of, “So why can't you be this positive?” Which is an interesting reflection of how many of the characters in the film bounce off Hawkins too.

ML: [clearly befuddled] I'm not sure that I know what to say about that, other than at least your friend has got the self-awareness and intelligence and sensitivity to recognize her response.

RS: This generation has come up against a lot of political and economic turbulence. You've spoken often about deliberately avoiding message films, but you're very politically conscious. Thinking about those kinds of upheavals that have happened during your career, what is it like, for instance, to make a period piece about abortion, and then see certain countries, especially mine, threaten or roll back abortion rights?

ML: Oh, I mean it's shocking. First of all, what led to that film is that I'm old enough to remember what it was like in the UK before the 1967 abortion act, and what women with unwanted pregnancies had to do. What’s happening to Roe v. Wade is so disgusting and depressing and outrageous and irresponsible on the grand scale. It's shocking, it really is. And when I thought about how Vera Drake is being screened in the retrospective, I thought something ought to be made of it, more than the fact that it's merely one movie in my collection. Because its message is clear and plain. I don't know what else to say about it, except that it's profoundly depressing.

RS: You had to suspend production on your most recent film because of COVID, and you’ve said you can’t proceed even under heightened safety protocols.

ML: I can’t really do what I do without having direct contact with people. The question of doing anything remotely or social distancing would be personally impossible on every level. I never considered it for a second.

RS: With your historical work, there are some predetermined story elements—Peterloo is a specific event that happened a certain way, Topsy-Turvy follows the development of The Mikado. How does that work with your stage of discovery and improvisation with the actors?

ML: It’s a combination of different things. Obviously, in Topsy-Turvy, the extracts from the three operas are simply stagings of those scenes. The choreographer and I worked with the actual prompt copies from the original productions of the 1880s. With all my films, whether contemporary or period, actors are always involved in a massive amount of research into all kinds of stuff that will make the thing come to life. With the Victorian films, we not only have painters researching painting, but also social and political and religious stuff, you name it, basically to bring the thing to life. But the scenes where they're rehearsing, or my favorite scene in the film, where they bring the three Japanese women and the guy from the exhibition to the rehearsal to show the actors how to “be Japanese”—that was absolutely done by improvising, and then paring it down and shooting it. And we happened to shoot it on the very last day we had in that real theater, so I had to get it together very quickly. There's something about the spirit of it, a function of the fact that there was no procrastination. We had to make it happen with great swiftness and lightness of touch.

RS: The eight restorations in this series have been made for a variety of reasons—anniversaries and boutique home releases and such. Has anything struck you about any film through the restoration process?

ML: I work with my cinematographer, and he obviously does the donkey work with the other technicians, but I'm very much there—I go and have a look and make comments and so on. But the people that do it know what they're doing, and they will respect the intention of the original. Sometimes one can really mess about with it and compromise its integrity, and then obviously there's no point. It's about enriching it in within its own terms. We recently did a restoration of Naked. Now, there's nothing wrong with what we did originally, but it just gave Dick Pope, with my encouragement, the opportunity to do a little bit more with what the intention was visually. The palette is more sophisticated than it was back in the day. So, it's just about bringing out the flavor in a way, but it's a subtle thing.

RS: You made the transition to digital photography only relatively recently. How did that impact your production methods?

ML: Well, fundamentally it's the same. As with any craft, there are certain refinements within the process, but it's hard to talk about those out of context. I'm still working in the same way as when I started—which is to say, creating characters with the actors and putting them together and exploring and building relationships and worlds and distilling those dramatically into finished movies. The first batch of films, apart from Bleak Moments, the ones made over the next 12 or so years, were all on 16mm for television. Although I regard them as movies and they were good and popular and nothing was wrong with them, they were shot quite quickly, made with less time and depth. Then I started to do theatrical features, and that made it possible for us to be more profound, take time more, and bring our picture standards up. But broadly speaking, it's the same. Since Mr. Turner, we've been shooting on digital, but Dick and I are 20th-century men, we are celluloid men.

RS: Has digital changed the way you shoot?

ML: Not really. I mean, it's very interesting, but you can—and people have—do a take that goes on for 180 minutes, if you want. My collaborators and I have learnt that you can't have a shot that's more than 10 minutes on the outside, because that might ruin the film. And I've never had a shot in my digital movies which has gone on for more than seven or eight minutes at the most. It’s important to use the medium and not let the medium use you. There are some movies where it's all about actors ad-libbing in front of the camera and then it’s all being bailed out in the cutting. That's not what I’m about at all. Our improvisation is very precise and rehearsed in the planning, so that when the camera turns over the actors can absolutely fly with it. It's organic and disciplined at the same time.

RS: Did you resist the digital transition at all?

ML: If you look at my films from the ’80s and ’90s, we had a little logo, with a pair of scissors poking holes, at the end of each that said, “Edited on film.” We were very proud that we were still doing that when editing on Lightworks or whatever was available. And then when we were shooting Topsy-Turvy on an extremely hot summer day in the middle of 1998, with a massive number of actors wearing thick Mikado costumes and all sorts of shit going on, at lunchtime my editor and a producer came to me. The producer said, “The budget dictates that we’re going to have to cut it digitally.” I said, “You know what, you can edit it on a fucking sewing machine for all I care, compared with the hassle going on right now.” And of course, we did. So, you learn, you change. We're all a bit luddite, as they say, until the time comes. And the proof is that our long-term resistance to shooting digitally was completely philistine on our part. All the time we were whinging about it, but you can do the most amazing stuff with it. Sophisticated and clever people were developing it quietly and making it very good. So, there you go.