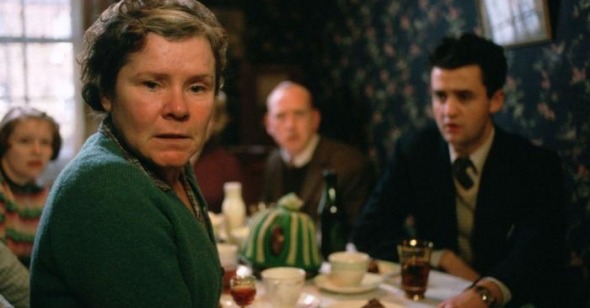 Currently playing in theaters across the country is a warm, modest chamber drama set in 1950s Great Britain about Vera Drake (Imelda Staunton), a plainspoken, loving wife and mother who happened to provide abortions to underprivileged woman on the sly, and it's among the most politically important cinematic statements of the year. While the foes of abortion in this country are now ruling the roost and raucously demanding significant expenditures of political capital to overturn 1973's landmark Roe v. Wade decision, Mike Leigh's Vera Drake sounds a contradictory note, one delivered with the volume of a whisper that hits like a punch in the gut.

Vera Drake's importance doesn't really spring from its quietly staunch, pro-choice stance, or the way Leigh forces us into close quarters with a character we can't help but admire, even adore (who wouldn't wish to have bright-eyed Vera, tea and cookies always at the ready, as a mother, aunt, or grandmother?), before fully turning the tables on the unsullied portrait the first quarter of the film lovingly paints. Admirable qualities, but Leigh takes his examination of the â€śback alleyâ€ť abortion a step further, replacing the commonly imagined horrors surrounding the practice (see a recent example in the dreadfully overwrought The Crime of Father Amaro) with something closer to warmth, even love. An abortion in Vera Drake, as delivered by its protagonist, happens with the rhythmic intensity of time-honed ritual, and Leigh invests each encounter with appropriate solemnity. One imagines some form of Vera's calming entrĂ©e, â€śTake off your knickers, dear,â€ť issuing from different mouths in different times and places stretching back through the ages. It's a breath of fresh air here in America, where we're still intractably fixated on a court battle born in Texas in the seventies.

Topsy-Turvy and, even more so, Leigh's latest only serve to prove that the more things change, the more they stay the same. It's this understanding of invisible yet binding historical through-lines that has allowed Leigh to traipse comfortably between eras without producing works that seem like tossed-off, indulgent diversions from his own historical trajectory as poet laureate of British brutalism. Would I be the only viewer ecstatic at the news that he had to chosen to abandon the perhaps lessening boundaries of the contemporary British working class in favor of a continuing resuscitation effort on period filmmaking? Choosing to take a narrow view of history in how one forms fundamental opinions and belief systems used to navigate the world represents, at best, a kind of lazy myopia, at worst, calculated ignorance. It's hard not to wonder how many people in this country (on either side of the issue's great divide) actually recognize abortion's long and always controversy-laden history. Would they believe that the Roman Catholic Church tolerated abortion up to the point where the fetus was considered â€śquickenedâ€ť or â€śanimated,â€ť until Pope Pius IX decreed that life began at conception in 1869? (Some argue this maneuver as a politically motivated decision meant to combat shrinking Catholic populations in Europe.) Would it change anyone's thinking on the matter to know that the reign of the supposedly least-moral president ever, Bill Clinton, saw lower abortion rates than that of his born-again, anti-abortion successor? As an artist, Leigh's position allows him the liberty of a surgically precise recreation of a specific time and place which provides Vera Drake with nothing less than the chance to completely transcend its perfectly realized milieu. In doing so, he offers hope for those of us sincerely worried about the fate of that ever more fragile Supreme Court decision. Leigh's essential vision shows us that abortion has always been with us, and its conclusion suggests that, regardless of the law, it always will be.

The last portion of Vera Drake pits the warm inexorability of Vera's practice with the equally unbending, historically vested application of power in the form of law. An abortion gone awry ends with one of her clients near death in a hospital and Vera's name reluctantly revealed to the police by the stricken girl's mother. Vera is arrested in her home while her entire family watches, and her subsequent downfall is appropriately, thoroughly tear-stained. To Vera, providing an abortion is merely â€śhelping young girls,â€ť but she is summarily sentenced to two years in prison for violating clauses added in 1875 to the Offenses Against the Person Act of 1861 (which applied largely to sexual acts committed against girls under twelve years of age, providing a harrowing piece of information about Vera's â€śvictimâ€ť probably lost on most viewers). It's in these last sequences that Leigh's sympathies are most plainly exposed. Detective Inspector Webster (Peter Wight) and the trial judge (Jim Broadbent) dispatch their duties with a noticeable lack of zeal-their glum eyes and pinched lips give away the truth: they don't truly believe this woman (who never asked for any compensation for her 20 years of â€ścrimesâ€ť) should be imprisoned, justified by an outmoded law. The fallout among her family is equally thorny. Son Sid (Daniel Mays) scornfully demands: â€śhow can you kill little babies?â€ť Daughter Ethel (Alex Kelly) and her fiancĂ© Reg (Eddie Marsan) take in the tragedy silently. Husband Stan (Phil Davis) demands and wins support for his wife from all. The near disintegration of the family unit plays out in as good an ensemble as Leigh has assembled (most of them appeared in his prior film All or Nothing); narrative situations push to the brink an easy, loving familiarity built up over the bulk of the film's running time.

In Vera Drake and its heroine lie the seeds of Academy Award recognition, and we should welcome the potential for a head-to-head conflict with this year's most reactionary entertainment: The Passion of the Christ. Unlike the minor flap around Kinsey, the Christian right seems strangely silent on the subject of our sympathetic abortioness, even the few reviews I've turned up on â€śfamily/moral valuesâ€ť entertainment websites have grudgingly admitted, that, yes, Mike Leigh's latest is excellently made and pretty tough to dismiss whatever your political persuasion. But if it's sympathetic heathen baby-killer v. JC himself up the world championship in moviemaking (a scenario that seems ever more possible with the release of each new awards-season disaster), this year's campaign might actually be notable for something the Oscars have lacked for so long: actual drama. Where the brazen imbecility of Passion hardly warranted anyone's attention, Vera Drake happens to be one of the best films of the year; it deserves to be seen and widely discussed especially in light of the potential changes in our own abortion laws that may lie ahead. Even if you choose to ignore Vera's political inquiry, has there been any more moving moment in cinema this year than the tearful Vera, distraught at being asked to remove a wedding ring she hasn't been without for decades before entering jail?

But let the Right bewareâ€”the end of Leigh's quiet manifesto demonstrates the resolve of those who would fight to ensure that abortions remain available for women who need them. Vera encounters two of her prison-mates, both of whom have been imprisoned for providing illegal abortions. One of them reveals that she is currently serving her second sentence for the crime and both, in all likelihood, seem ready to continue providing these services once they've been released. The film ends there, but a part of me likes to imagine this moment as one of political self-awakening for a woman who worked with only good in her heart, without though for the political ramifications of her labor. Vera Drake has the makings of a powerful symbol some half a century later and half a world away for those who believe that quality of life for all is more importantâ€”more moralâ€”than merely ensuring steady increases in the quantity of life. In the hands of a filmmaker like Mike Leigh, should we have expected anything less?