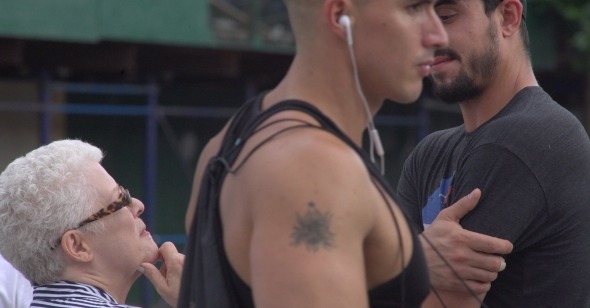 Intimate Distances plays at Museum of the Moving Image on Sunday, July 25 as part of First Look 20/21.

Philip Warnell’s Intimate Distances offers a reverse kind of filmmaking, showing how a particular role might be cast based on preconceived notions, and then further understood through the audience’s personal biases. What transpires through the film’s deft 60 minutes is by no means clear-cut, but it could ostensibly be described as this: an older woman walks along Steinway Street in Astoria with a strong sense of purpose. She is shot bird’s-eye-view by an unknown cameraperson who wields his lens like a sniper’s gun, tracking her as she moves. The woman periodically stops men on the sidewalk, earnestly asking them questions that start out benign before quickly becoming intensely personal: from “Did you grow up around here?” to “Do you ever scare yourself?”

Without the knowledge of the fact that the woman is the well-regarded casting director Martha Wollner, who’s worked with documentary filmmakers for decades (most notably for the Maysles brothers), we may wonder what she’s after. Wollner being a small, white, gray-haired woman with a Southern set of manners (at one point she mentions she was born in Tennessee), she’s easily able to approach her subjects, exclusively adult men over six feet, without them questioning her motives or recoiling from her gaze. Meanwhile, an anonymous narrator gives an overview of his time spent in prison, adding a sense of menace to the otherwise neighborly experience.

Warnell is an artist and filmmaker based in London, whose work takes a philosophical approach to the very act of seeing. In Ming of Harlem: Twenty One Storeys in the Air (2014), he follows a man who lives with a full-size tiger and alligator in his Manhattan apartment, being fascinated by animals for their “pure visuality,” as he says in a 2014 interview at the Lo schermo dell’arte Film Festival in Florence. In his new film, Warnell inquires into the layers of seeing—starting with the casting director’s penetrating eye, then moving out to the cinematographer’s surveillance-style camerawork, and ultimately asking us to question our own perspectives as viewers.

I wrote to Warnell with a short list of questions, which he enthusiastically agreed to answer via email. Since much of the power behind the film comes from its openness and relative lack of clarity, I encouraged him, in that spirit, to feel free to offer as much or as little explanation in response to the questions as he’d like, to ignore a particular question, to answer more than one question at once, or to offer answers to his own questions. He responded in an en masse exposition, and what follows is a reverse-engineering of my questions to his answers, offering some structure to the otherwise loose exchange.

Reverse Shot: What made you decide to focus your film around the often unseen work of a casting director?

Phillip Warnell: A casting search is the elusive, prescient art of trying to read the future, but one which also touches upon the darker side of the cinematic psyche. It is at the very heart of this film’s making. I was intrigued by the informality, methods and archiving of street casting, its divinatory quality and empathic requirement for a scout or casting director to look beyond appearance, seeing with both foresight and sensibility.

Martha’s search for a character is based on a return (to the scene of a crime). She formulates how looking becomes seeing: spotting, waiting, approaching, quizzing, and deciding when to elaborate her encounter or terminate it. To bridge the divide between complete strangers she uses a disarming, rather heartening method which I was entirely unaware of until filming with her, her co-conversant often sharing their personhood and intimate details. It reminds us how the camera, director and cinema itself often attempts to induce convincing characters and performances. They attempt to describe what lies beyond recognition, whether plausibly, convincingly or otherwise. The casting director’s search is not for an identity, but for a spectrum of options, inflections, and possibilities. Or, when things are not going quite so well—typecasts and stereotypes.

Intimate Distances makes the searching, methods and archives which form the auditioning process its point of focus. Casting is a fraught endeavor—akin to profiling—towards a wider search for authenticity, believability, and characterization that might embody screen-hood. It provides the screen an anatomy, and might even work at the level of soul searching, raising the anima, a divinatory form of phantasmatic apparition.

RS: I’m interested in your relationship and attitude towards what I see as the four key “players” in the film: the cinematographer, the casting director, the various men spoken to on the street, and the voiceover actor. What role do you see each of them playing, and how do they operate in relation to one another?

PW: The film is set within the local coordinates of Steinway Street and its intersections, the filming governed by our actions in public spaces, where bodies are impacted on by civic rules as much as the instability of the street: Martha’s search framed by subway exits, meeting points and pedestrian encounters. Steinway Street is the fifth player in the film, its atmospheres shaping our collective efforts. I had very little idea of Martha’s disarming ability and what that would generate whilst we were filming (and we could not hear her conversations). I did, however, ask Martha to “buddy up” to her respondents, primarily to bring them “on mic.” Looking back, I enjoy this covertly choreographed element, seeking to share breathing and recording space as a precondition for cinema. Hopefully, the exchanges offer a reminder of how vulnerability, closeness, and sharing are integral to local politics, which operate around compassionate exchange and duty of care, even if encountered within prompts of question and response “interview” mechanisms. And, of course, Astoria’s intersections gather those involved in local trade, recreation, trauma, policing, conflict, and even amorous couplings.

I worked very openly with the cinematographer on this project, giving Jarred Alterman significant latitude to explore alternative sight lines and the extraordinary distances our set-up covered. According to philosopher Jean-Luc Nancy, the ability to zoom is the only real difference between cinema and theater. At height and in an expanse, due to working with such a long lens, we had enticing, unfamiliar options. As a first digital film (I’ve previously only made analog films), I encouraged Alterman to explore how we might convey the qualities of distance and closeness within single, extended shots, and parts of the film display this. For example, we sometimes hear Martha’s conversation develop whilst viewing arbitrary street actions. It takes us seconds, or minutes to find, identify, and close in on her exchange within the frame. In other parts of the film, we track random street scenes and arbitrary movements, incorporating gestures, movements, and fleeting events. Placed in the context of the film, however, these appear as surveillance and micro-narrative. It contributes to the uneasy sense by which the viewer implicates crime in passersby (aided by the voiceover and atmosphere of the scene), mirroring our precautionary behavior in public space. In this sense the film is an attempt to address the proximity between cinema and crime-making, which operates on several levels, and which I am developing in future work. In my view, any use of lens-based media inherently seeks to “take advantage,” placing the filmmaker in an ethical dilemma, whatever their collective or political intentionality.

RS: The voiceover has a sort of cognitive dissonance with the main action of the film. What is its relationship to the other players?

PW: The voiceover returns us to the scene of a crime. It is what it announces at the film’s outset: interview, audition, and testimony. It is actually a failed, unearthed audition from the archives of another film, which has been resurrected. As Jean Genet says, writing is always a declaration, or even a betrayal. The men Martha approached were consistently part of a certain age group, in keeping with the voiceover character. Beyond that, I was keen to avoid a known, fixed profile to which she had to work. Her scouting therefore explores developing inflections and expressions of subjectivity, which are joyous, traumatic, and present humanity in its manifold guises. I avoided trying to illustrate a fixed, known identity, resisting any orthodox cinematic, criminal, or policing techniques. Instead, it foregrounds the fascinating idea that casting is primarily an intersubjective process, an opening toward multiple characterizations. In this sense all castings hold the potential of a multiple self.

RS: You’ve spoken about your interest in a “search for interiority” relative to the body, a desire to expose “the inside of the outside and the outside of the inside.” How do you explore these ideas in this project, and how do you see your role interacting with the “players” mentioned above?

PW: The threshold between interiority and exteriority is a crucial aspect of my film and creative work, as is stepping back from and critiquing a more conventional film director role. I do not support the conventions and hierarchy of the film industry and its commerce, which are inherently toxic, exploitative, and propagandized (a problem caused by industry and many filmmakers alike). I’ve learned to position my thinking, considering the inside/outside as a non-place of imbrications and folds, rather than a binary, oppositional barrier that delineates the gap between you and me.

The promotion of the special individual and their nationality is again something I would distance myself from. Instead, we are a process, a constellation by which we thread and touch elements of the other, one whose origins are always already within us. Actually, we are all made of the outside, in ways and means that provide a fluid, unknowable, shared identity (not to be confused with our profound and individual need for belonging). My cells are of course a union of my parents’ card-shuffling into a unique variation, but each of us is also composed within unknowable, ancient structures, the details of “life expectancy” that go back to the very fabrication, energy, and formation of bodies.

RS: How do you translate your desire for open-endedness and experimentation to your cast and crew?

PW: As an artist, time on a film set is always an opportunity to work with an intriguing, if sometimes tension-fueled arrangement of film professionals and relations. Most have certain expectations, and as a director I enjoy tapping into these skill sets, knowledge, protocols, etc. as well as circumnavigating them, toward some other creative imperative, devised specifically for the project. I tend towards such open structures as an artist-filmmaker, avoiding fixed or known goals and approaches. If only this were a more supported form of “treatment”! I prefer operating on a thoughtful set, with a combination of in-the-moment decision-making and prior depth of inquiry, where research meets resourcefulness. It means the work can be reflexive, sensitively felt, ambiguous, contradictory, and most especially, ready for unanticipated and serendipitous occurrences.