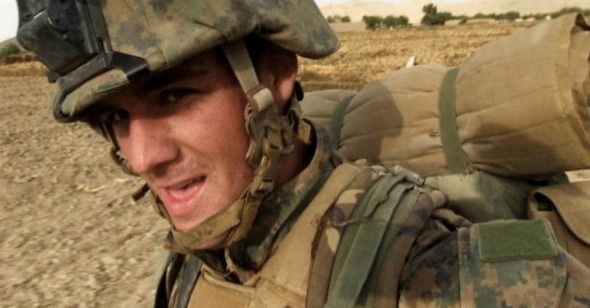 In Combat Obscura, Miles Lagoze and editor-producer Eric Schuman repurposed the footage Lagoze shot in Afghanistan while enlisted as a combat cameraman for the Marine Corps to create an empathic and effective antiwar war movie for our current age. Intercut between the dramatic instances of gunfire and violence are mundane moments of boredom, fatigue, and watching movies. Unerringly effective in its ability to convey the rhythm of life for the soldiers, Combat Obscura is an endless dance of drama and futility that feels as though it could have been playing on a continual loop over the past two decades. Read Emma Piper-Burket's full review.

Miles Lagoze: When I got out of the Marine Corps, I went around and interviewed the guys in the footage, now that they were out of the military and adjusting to civilian life. I was basically making a Restrepo-type of doc with talking heads. It felt very forced. The kind of footage that I had was stuff that you see on YouTube and on weird war porn sites where soldiers would upload it themselves. There's a very different barrier between the camera and the soldiers, as opposed to a civilian filming them. Like there's no barrier really, it's just a fellow 19 year old.

So I started looking for an editor at Columbia and Eric jumped on. He watched the cut that I had and the first thing he said was, “I like it, but I want to see more of the footage.” He was more interested in the rawness of the footage and assembled a five-minute reel, and it just became so much more authentic. And kind of cathartic in a way, because I was holding back with the footage. There were certain things that I didn't want to show. Either I had normalized it, or didn't want to offend anyone. But Eric, as a civilian, was just all in.

Eric Schuman: We had to trust the footage and trust our instinct that the audience would respond to it. The film doesn't have a traditional narrative, but it does have a thematic structure. And figuring that out was a big part in trying to make sure that it did hold the audience's attention.

RS: I do feel like the spareness of it is what makes it so effective. You're completely immersed in each moment, but there's never a feeling of being inundated with information, so you're able to experience it in a different way.

ML: It sort of replicates the actual feeling of a deployment, whereas when you have a narrative, it tends to become a story. There's a thematic structure, but it's not a story of a deployment, it's more of an experience.

ES: You're introduced to kids who are joking around and making a game and making fun out of this experience. And then as the film goes on they are confronted by the reality of the situation and it changes them in ways that they didn't expect. Something else we were threading throughout the process was how clear of a point we are making about the war, and our feelings on it. We were trying not to be “both sides-y” about it, but more structural and less specific. So people we were showing it to would talk to us about what editing points—this shot next to this shot is too on the nose. Negotiating that was exciting from an editing standpoint.

RS: Obviously these are people whom Miles knew and was enlisted with. Thinking about them in the process of editing, I'm curious how the two of you negotiated the personal background of the material with the objective reality that was recorded?

ML: When I went to interview them, I still kind of felt an allegiance, not just to them but also to the institution of the military. You get out of the Marine Corps, and it's such a part of your identity that you still feel that connection for a long time. When Eric came in, he had no allegiance, so he was open to showing everything. It really became cathartic for me, because this is the kind of stuff that we didn't really want to remember. With all memory you tend to look at the good times. You don't really think about the bad stuff or you just kind of put it in the back of your head. So putting all that shit in—it really became more honest, but also kind of scary. Because I was concerned what the guys would think, what the military would think, obviously. But I showed it to a lot of the guys in the film and they get it. They think it's right. They think it's good.

ES: Part of the thing I'm proudest of and makes me feel good about my contribution to the film is that when we do show it and there are veterans in the audience, they respond very positively to the film—even if it's in an emotionally negative way.

ML: You're giving the soldiers themselves a sense of agency. A lot of these kids are in a fucked-up mindset, and they come from fucked-up backgrounds. But these are the kids you went to high school with, who are now fighting the wars. Showing the good, the bad, and the ugly instead of hero worshipping like most war movies and war documentaries do.

RS: As you were filming did you have in mind that you wanted to do something with the footage afterwards?

ML: There are these things called “moto videos”; “moto” is for motivational. It's basically a deployment video—which is actually what the film became. Combat Camera usually compiles the most heavy, intense, and funny stuff of the deployment into a short five-to-ten minute video, and then you give it to the guys at the end. So you think about that while you're filming, but I didn't think it was going to be a feature film. I was just filming everything that was happening as a diary. It becomes an obsession, you want to film constantly, it sort of distracts from the reality of what's going on.

At the same time though, it was sort of an outlet for the guys, because they loved seeing themselves. Especially in combat, if they're getting shot at, shooting their rifles, shooting their guns—they love to see that on-screen, because it sort of reinforces their identity as a Marine, as a soldier. So the camera is like a weapon, but it's also sort of an instigator. It creates a feedback loop of their behavior; they're trying to mimic certain things that they've seen in movies and stuff.

RS: So the footage that you used in the film, you were also editing for internal use in the military. How does that make you rethink the material in general?

RS: Did you have an intention with what you hoped the film would do, or was it the process of making it that was important?

ML: If it gets kids to not join the military, that's a good thing. We do want to challenge the general mythology of war. I think Americans put a huge amount of moral authority on people who have been through war, regardless of whether they believe in what we were fighting for, and we want to dismantle that as well. To show that these kids are just living day to day and they're just normal kids that you know from high school. And also the whole absurdity of not just the war, but there wasn't even a clear idea of what winning would look like. Which is insane to think, that the military would spend trillions of dollars and going on 18 years—what was the end goal? They never really established that.

ES: Especially since the first person who was born after the war started just joined. That's just ridiculous.

ML: A lot of times at festivals people watch it and then come up to me and say, “We'll never understand—we can never imagine what it was like,” and it's like—we just showed you! I think it's important to stop reifying trauma in general. Understanding that it’s an abstract thing, and war is many different things, it's very complicated. And to just maybe come away with a more nuanced understanding of the troops and the conflict. I guess that's all we can really hope for.

RS: Did the experience of making this film make you think about your own experiences differently?

ML: I think for a lot of vets it's the most significant thing you can go through. It's kind of like the high point of your life. It's hard to get back to that level of intensity and purpose, because you have a purpose, which is to stay alive. You never really reach the highs and lows of it again. Now after spending all this time going through all these memories and all the footage, it's a lot more troubling to me, which is a good thing. I think we're at a point as a country where we can look at it as it actually was—and is. But it's definitely changed how I feel about my memories. I wasn't proud of what I had done, but I was proud that I had experienced the whole thing, whereas now after finishing the film, I feel more guilty just for being there. …

ES: For having joined?

ML: Yeah, just your presence there, putting people's lives at risk. So many kids grow up watching Apocalypse Now and Full Metal Jacket and it's like this secret—the thousand-yard stare, you come back and have seen something beyond, and that is so alluring. It's fucked up, but it really does allure, mostly young men. And I still kind of had that conceit of it—that I had made it through war but now just feel guilty for having put people's lives at risk just for my own personal experience, or whatever.

ES: What do you mean your own personal experience—do you feel like you were going there to really live?

ML: Yeah, I think a lot of kids do. That's the whole misconception about the military, especially the Marines Corps—that it's ideological and you want to serve your country. In 2008 when we joined the war in Afghanistan, everyone knew it wasn't helping America or Afghanistan. There's always going to be a pull—or an allure of war—just because we've mythologized the experience of it.