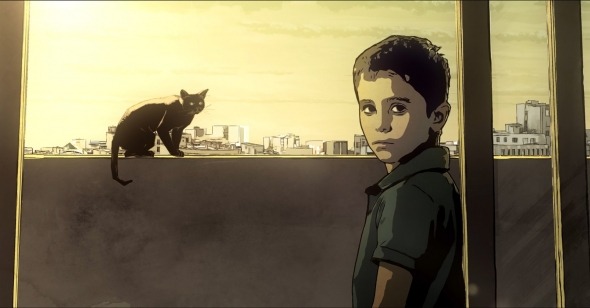 The Full Scope:
An Interview with Ali Soozandeh
by Muhammad Muzammal

This scene, like several in the film, exposes the sexual hypocrisy in parts of Iran. Soozandeh impressively weaves together stories of characters who must contend with Iran’s sexually restrictive laws and society. Pari strikes a deal with a local mullah to obtain a divorce from her drug addict husband. Sara is pregnant and has an unempathetic husband who does not allow her to work outside the home. Babak and Donya must erase evidence of their one-night stand by finding a fake hymen for Donya before her wedding takes place.

For all these stories, Soozandeh utilizes rotoscope-style animation to colorfully depict a world disrupted by a sexually oppressive culture that impedes upon characters’ inner lives. Even though Soozandeh doesn’t break new ground with what he depicts—several, more minimalistic films have been created about Iran’s problematic systems (A Separation and Leila)—the film is distinguished by its visual power. Perhaps the most significant taboo is simply in how the film is presented, rather than what is shown. Soozandeh delivers his rough, savage story using a palette multidimensional in imagery and color. The result is an evocative, expressive work.

I sat down with Ali Soozandeh to discuss his new film, sexual restrictions in Iran, rotoscope animation, his influences, and more.

RS: This film depicts the rough underbelly of Tehran. Its subject matter encompasses prostitution, sex trafficking, and suicide. Why did you choose to include the types of characters and subject matter that you do in your film?

AS: I was born in Iran and I grew up there. Each time I think of my past life in Iran, I ask a big question: why are there so many restrictions, especially sexual ones? These restrictions change people’s lives and shape their character. Why then is it taboo to talk about these restrictions? Everyone knows about these sexual restrictions, but nobody talks about them in public. So, writing the script was me trying to find answers to those questions. Iranian society is like other societies that follow a similar structure full of restrictions. These include North African, Middle Eastern, and Arabian countries. These countries also have male-powered societies, in which men make decisions for women. This is one of the points addressed in my film. Both men and women suffer from this, but I think the women suffer more.

Iranian societies are also structured in terms of family honor. The women are responsible for keeping that honor. Situations like extramarital relationships will bring danger to the family’s honor, so that responsibility is placed on the shoulders of women. On the other hand, women must teach the next generation the same rules that have limited themselves in society. It is complicated. Therefore, I concentrate more on the female characters.

RS: I want to stay on one point—this idea of not talking about these sexual restrictions in society. Iranian writer Sadegh Hedayat wrote a novel, Haji Agha, in which the sexual deviancy of mullahs is discussed. Iranian media outlets, such as Shargh, published articles about Iranian women being trafficked in Dubai as sex slaves in 2010. In addition, news outlets such as BBC Persian and Manoto TV, which are broadcasted in Tehran, discuss domestic prostitution from time to time. Looking at how some of the sex related taboos of Iranian society have been discussed by Iranians in these ways, explain what you believe Iranians should do to further talk about sex-related problems and restrictions?

AS: A lot of Iranians tried to break the silence and did it. They are writers, filmmakers, and media members. But it is not enough. We must break the silence but change the mindset that is ingrained deep into the society. I see a lot of Iranians living outside the country, in Europe and elsewhere. After spending time there, they are still confused by an Iranian film such as mine, which shows sex and normal lives as they know it. They aren’t used to seeing such a film and so, they say to me, “Why do you show something like that? That’s not our culture!” This shows the mindset that keeps us from talking about sexual restrictions in public. The mindset comes from our education, and regardless of where we are—inside Iran, outside Iran, modern society, traditional society—the mindset stays.

RS: Some Iranians I spoke to have told me that the discussions about these restrictions already take place in society, but it seems what you’re saying is that these discussions are not constructive enough to cause a change.

AS: Yes, that is correct. After viewing the film, I want the audience to ask themselves, “What is my role in this game? Why do I play this game? How can I change myself and change my society?” I think film can change society a little bit, but it is hard. In the opening scene, the taxi driver who has a prostitute in the car, sees his daughter with another man and he turns into a wild animal. This brings up a question—why does he act this way? His reaction is not singular; many Iranian men react this way and this type of reaction is the type that is in our mindsets. As a man, I am free to do sexual things, but we cannot see our women and daughters doing those things. Does this thinking come from religion or politics? I think it comes from our education.

RS: By education, do you mean the school system?

AS: Not only the school system, but the family. For example, everything we learn from the older generations gets passed on to us.

RS: Shifting the focus to a different audience, what would you like a non-Iranian viewer to walk away with after viewing the film?

AS: I get a different feedback from a non-Iranian audience than from an Iranian audience. Iranians will ask why I showed such taboos and a non-Iranian audience will talk about artistic elements like the animation technique, the storytelling, the shooting on the green screen, the music. I think it is important to tell a non-Iranian audience that the film doesn’t try to describe the whole society in Tehran. We have a high contrast society in the city. Depending on where you are, you’ll find a different society around you. Tehran is a big metropolis of 14 to 16 million people. North of Tehran is the modern district, where houses have swimming pools and private streets. Here, women don’t have to be virgins when they get married, since nobody discusses that. In south of Tehran, there are very poor and religious districts. Here, you find the situations shown in the film. Turkish, Kurdish and Arabic people live north of Tehran. There are lots of people and lots of languages found in the city. You can’t really describe such a complex society in one film, but you can describe this one issue of sexual restrictions, which is what we did.

RS: I thought the filmmaking was very accomplished. This film employs rotoscope animation, which involves filming with green screen, then in postproduction digitally adding other components, such as the lighting. Can you talk a little about the challenges in using such a technique?

AS: We first tested with animation techniques like hand-drawn characters, 3-D characters, and puppet animation. None worked for the story. We needed a little reality in the animation, for the story is not a story for children. It is not a fantasy. It is for an adult audience. That’s why we chose rotoscoping. It is a technique that allows us to recreate reality in animation. We shot green screen with real actors, and after that we animated them. In the animation stage, we created the whole environment by building the city digitally. After that, in the compositing stage, we put all these elements together—the background and the animated characters. When we were filming, no one on set could imagine how the final image would look. In the end, it was a big surprise for us to see how well each scene worked.

RS: What were your main artistic influences for the film?

AS: For storytelling, 21 Grams and A Separation. For animation, Waltz with Bashir and Hayao Miyazaki’s films. I like the way Miyazaki tells stories from the perspectives of children. A big part of my film is from the perspective of a mute boy. He is like our camera; we know our characters and their secrets through his eyes. I think Miyazaki can obtain this kind of perspective in the best way.

RS: You could not film this in Tehran due to censorship laws. Iranian directors normally shoot in Morocco or Syria to work around censors. However, you said in past interviews that rotoscoping was an alternative means to recreate Iran, without ever going there. Do you think the animation technique should be used more by directors from countries constrained by censorship laws?

AS: Yes, but it’s hard. It is very difficult financing, selling, and distributing an animation film. But animation is a way to get around censorship. On the other hand, because animation films are not so concrete, they give a little space to the audience for self-imagination, and this kind of cinema insight is a big advantage for animation films.

RS: You mentioned in an interview last year that you two stories in mind for your next project. One is Iranian and the other European. Have you decided which project to pursue and will it be animated or live action?

AS: The story will take place in Berlin. I think it will be an animated film.