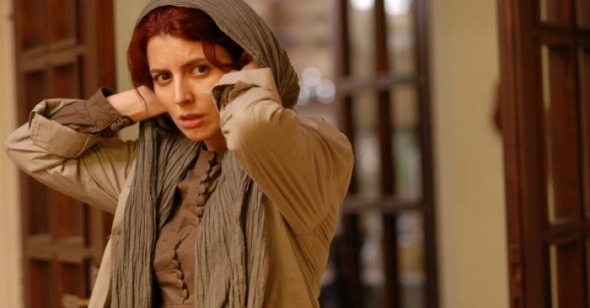 ‚ÄúIt‚Äôs a screenwriter‚Äôs film,‚ÄĚ said a friend of Asghar Farhadi‚Äôs A Separation, a designation that is at once accurate and dismissive, on the nose and besides the point. Yes, the film, which won the Golden Bear in Berlin and received excellent reviews at the Toronto International Film Festival before its selection at NYFF, is extremely well-written, but the idea that its writerly qualities should preclude its recognition as vital cinema strikes me as pretty reductive. The film is superbly written, but it's also smartly directed, insofar as there‚Äôs a continuity between its writer-director‚Äôs ideas and the visual language he uses to express them.

Take, for example, Farhadi‚Äôs staging of the first scene, which simultaneously anticipates other key sequences in the film while also standing alone, bracketed off from the rest of the action. We get a two-shot of the film‚Äôs major characters, Naader (Peyman Moaadi), a prosperous Tehranian bank teller in his mid-thirties, and his wife, Simin (Leila Hatami), seated side by side against a white wall. This beginning is an ending, of sorts: the couple is in front of a judge and trying to get a divorce. During this static, uninterrupted shot, the pair speak, first in turn, and then over one another, about the rationale for their separation to an unseen arbiter.

Simin desires the divorce because Naader will not give her permission to leave Iran, nor to take their eleven-year-old daughter, Termeh (Sarina Farhadi), with her to have a better future. His refusal to leave is bound up not in the consolidation of his authority but rather his responsibilities to his Alzheimer‚Äôs-stricken father, who has moved into the family‚Äôs apartment. It‚Äôs simultaneously clear that Simin and Naader have mutual respect (‚ÄúHe is a good and decent man,‚ÄĚ she says of her husband) and that their positions on this matter are completely intractable‚ÄĒstubborn pride masking the deep hurt of people who love one another. The direct address of this opening puts us in the same position as the magistrate, presenting us with two people and their respective lines of reasoning, and begging our observation and observance, if not our outright judgment. This is an apt overture for a film that is explicitly about how slippery the onus of interpretation can be‚ÄĒespecially when all parties involved would seem to have a pretty good case.

The matter-of-fact way that Farhadi lays out his main characters‚Äô grievances‚ÄĒand the judge‚Äôs decision to not grant them the divorce on the grounds that neither partner has abused or betrayed the other‚ÄĒbelies the complexity of the ensuing narrative, which quickly sprouts outward to include a number of other key figures. Simin‚Äôs absence strains her relationship with Termeh, who doesn‚Äôt want to leave her father and grandfather, but also necessitates the hiring of a housekeeper to care for the latter, who cannot be left alone during the day. She turns out to be a lower-class woman named Razieh (Sareh Bayat), whose unfamiliarity does not deter Naader from seeking and trying to institute a quick fix. In desperate need of money to support her unemployed husband and daughter‚ÄĒand in the early stages of another pregnancy‚ÄĒRazieh takes the job, though an early scene where she phones a religious hotline to ask if she can have permission to change her elderly charge‚Äôs underwear after he soils himself suggests issues beyond a lack of qualifications.

There‚Äôs more plot in A Separation‚ÄĒa lot more, in fact‚ÄĒand I‚Äôm not interested in synopsizing it. I‚Äôve provided this detailed set-up of the film‚Äôs early action to address the suspicions of certain critics that its narrative complications, which begin after Razieh is caught having slipped away from her job in the middle of the day, leaving the old man tied to the bed for reasons that are either very easy or impossible to understand, are overly contrived. This contention places A Separation in the crossfire between conventional narrative cinema‚ÄĒa sloppy, nearly infinite and totally imperfect category that will have to suffice for the moment‚ÄĒand the so-called ‚Äúslow cinema‚ÄĚ that has informed many a film-cultural think-piece in the past few years, films that are not, if I may generalize, ‚Äúscreenwriter‚Äôs films,‚ÄĚ even if they are often the work of writer-directors. Think Tsai Ming-liang. Think Lisandro Alonso. And think B√©la Tarr, whose valedictory The Turin Horse was deemed in some corners to have been robbed of the Golden Bear by A Separation.

For my money, The Turin Horse is exactly as contrived as A Separation, which is to say, completely so: both are works of fiction whose narrative worlds and characters have been set into action by their creators (in Tarr‚Äôs case, he‚Äôs built upon the biography and works of Friedrich Nietzsche). I do not come to bury The Turin Horse, which is grave and beautiful in the usual Tarr-ian sense‚ÄĒthe opening shot is one of the most remarkable things I‚Äôve seen on a movie screen in a long while‚ÄĒbut I find the differences between these totally un-comparable (if not incomparable) films to be instructive. Tarr does Tarr, overlaying his thick, depressive sensibility‚ÄĒand voluptuous camera style‚ÄĒon material that fits that approach snugly. (Which makes it an improvement over his Georges Simenon adaptation The Man from London, a fleet narrative the Hungarian distended to intermittently stunning and mostly grueling effect).

With its beautifully textured gray-scale cinematography and sustained camera movements, The Turin Horse is hypnotic‚ÄĒmaybe literally given its maker‚Äôs repetition-compulsion‚ÄĒbut there‚Äôs not much to think about. Or rather, the gigantic issues in play, of life and death and the possible preference one should have for the latter to the former in the face of howling, gale-force cosmic indifference, are no richer or more legible after 144 minutes than they are after the first 15. The Turin Horse is ‚Äúslow cinema,‚ÄĚ and perhaps great cinema of a kind, but‚ÄĒand this is an observation, not a criticism‚ÄĒit‚Äôs so rigorously self-contained as to choke off any response beyond the mute acknowledgement, and, depending on one‚Äôs taste, admiration, of what it‚Äôs doing‚ÄĒand make no mistake, it‚Äôs doing it to you. (Note: I did not feel this way about either Satantango or Werckmeister Harmonies, possibly because Tarr was able to balance his existential angst with a welcome and leavening strain of grotesque folk humor).

A Separation, on the other hand, is no more than spare and functional in its aesthetics, although there‚Äôs something to be said for the choices Farhadi makes even after his quietly bravura opening. Simin and Naader‚Äôs home is a choice piece of location scouting that allows for plenty of shooting through windows and around door-frames, and the issue of compromised sight-lines even ties into the story, which I am bent on not spoiling. The editing is generally unobtrusive, although at least one noticeably abrupt cut offers a good example of a filmmaker purposefully spiking his rhythms to provide a payoff later on: in a film where almost every important event occurs on camera, in plain sight, it‚Äôs important to note when it seems as though something is being elided. There are also a few plangent visual metaphors on display, none more affecting than when Naader gives his dad a sponge bath in a flooded bathroom, weeping over the graying, dried-out husk underneath his hands. This image‚ÄĒof a man lovingly maintaining an oblivious, failing father figure‚ÄĒis the provocative center of a film that slowly builds into a kind of state-of-the-union look at contemporary Iran.

This subtle patriarchal critique is balanced against Farhadi's treatment of his two major female characters, both of whom defy their husbands with dire consequences. The contrast between Simin and Razieh‚ÄĒone thoroughly modern with her dyed-red hair and yearning to escape; the other timid and so tied to religious traditions that she lacks agency and, depending on one‚Äôs interpretation of her behavior, sanity‚ÄĒwould seem to be obvious but for two things. Firstly, both actresses are so good that they develop the roles beyond the stock types of rich housewife and impoverished laborer; secondly, Farhadi is only establishing this social and economic gulf so that he can provocatively collapse it.

The fact that A Separation is interpretable either as a lament for a country stifled by patriarchy or a cautionary tale about the destabilizing effects of female willfulness of course means that it‚Äôs neither: it‚Äôs a very carefully written drama in which, to quote The Rules of the Game, everyone has his (or her) reasons. The film keeps giving us things to think about: not only the twisty, surface-level stuff of the plot, but underlying questions that are both pointedly specific‚ÄĒlike whether the same Iranian legal system that would deny two consenting adults a mutually wished-upon divorce is any clearer-eyed when it comes to looking at an accidental crime‚ÄĒand completely universal, as in the examination of how parents can impose, rather than impart, values upon their children‚ÄĒand also use them in pitched personal battles.

These themes are inarguably present in A Separation, which even the unimpressed would probably agree is, at the very least, a work of substance. The charge might be that they‚Äôre too cleanly delineated‚ÄĒif not by the standards of most American movies, perhaps in relation to the shining lights of modernist Iranian cinema. Farhadi is a youngish veteran filmmaker, and I‚Äôve only seen one of his other features, 2009‚Äôs fine About Elly, concerning a group of middle-aged friends on a seaside vacation. On the basis of these two films, however, I‚Äôm prepared to make a couple of observations: 1) his style doesn‚Äôt owe much to the duration-based innovations and reality-fiction blurring of Abbas Kiarostami or Moshen Makmalbahf (themselves perhaps dissimilar artists); and 2) that‚Äôs okay. Kiarostami‚Äôs track record is above reproach, and yet if I‚Äôve always responded more passionately to the work of Jafar Panahi, it may be because the latter has found a way to intertwine social and medium-specific concerns until they‚Äôre one and the same (as in the phenomenal This Is Not a Film); my guess is that the Panahi who made The Circle, with all its nagging, powerful contrivances, would like A Separation.

So: we have well-wrought narrative architecture and a skillfully realist presentation. Not enough, it seems, to put a director at the forefront of any national artistic vanguard. The case, then, is for Farhadi as a smart, supple dramatist whose respect for the viewer manifests not only in his choices to delay or even deny narrative satisfaction (the film has a nicely executed, if perhaps slightly predictable open ending that even provides a visual rhyme of the first scene) but also his lack of guile when it comes to giving up narrative and emotional payoffs. A lot of the movies I revere right now are big on withholding, and yet A Separation offers up vividly self-divided characters caught up in a relentless plot tinged with hints of social critique. If that indeed makes it screenwriter‚Äôs film, let the record show that this is a compliment.