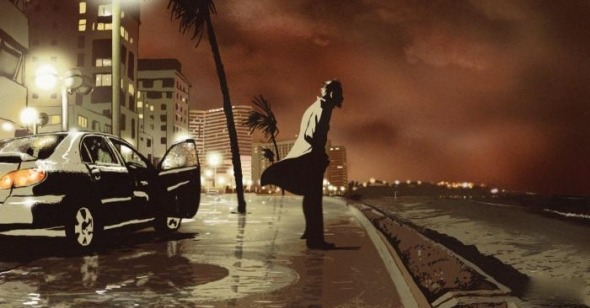 In Living Memory
by Michael Koresky

How does one avoid overly aestheticizing violence when using animation? By its very design, the new film by Ari Folman, Waltz with Bashir, which takes as its subject the notorious 1982 massacre of Palestinians at the Sabra and Shatila refugee camps, carried out by Lebanese Phalangist militia, but allowed by controlling Israeli forces, invites serious questions of representation, not least because the narrative is told from behind thick layers of computer-generated cartoon imagery. That Folman, working ostensibly within the narrative boundaries of documentary, manages to circumvent nearly every one of these ideological and aesthetic concerns testifies to his intelligence, compassion, and sophistication as an artist. Despite a radical, unified look, the imagery in Waltz with Bashir ranges from the mundane to the dreamlike, and often those distinctions collapse, expand, and mutate right before our eyes. Folman isn’t gussying up a difficult chapter of history in accessible pop extravagance; rather he’s using a new form to investigate the terrible persistence, not to mention unreliability, of memory and perception, and how personal and political deceptions often go hand in hand.

Though Folman’s opening imagery—rabid dogs, their eyes lit like glaring headlights and their tongues wagging like loose slabs of meat, on a single-minded rampage through city streets aimed directly at the audience—would seem to situate the film in heavily shaded graphic-novel territory, the film is hardly so easy to pigeonhole. We soon learn that these nightmarish animals are indeed the stuff of bad dreams, those of Boaz, a veteran of the Israeli army who has vague recollections of the Sabra-Shatila massacre. As the movie begins, Boaz is relating the images of the ferocious dogs to his friend, filmmaker and our narrator, Ari, and at first the radical reconstruction of their visages via CGI takes some getting used to. The technique looks not unlike that in Richard Linklater’s Waking Life (in this case though, the animation was drawn based on the video footage Folman shot rather than digitally rotoscoped) because the style itself grants the entire mise-en-scène a sense of being unmoored. These people speak rationally, in recognizably human tones, but they look as if they could float off into the ether at any second. As they gesture, their joints seem fastened as though with paper clips, their mournful eyes register as simultaneously hollow and burdened with too much past. They’re shells of people; mortals maybe, but they’ve seen much and perhaps sloughed off their skin in the painful, preceding years.

It’s this focus on bodies and faces that elevates Folman’s accomplishment; without its director’s obvious compassion, Waltz with Bashir might have been little more than a digital showcase. The structure of the film—that Ari is searching for the “truth” about what happened over 25 years ago at the refugee camps by interviewing his fellow soldiers, and none of them can quite remember or agree—is not simply a plot device; Folman directly investigates, through form and narrative, the act of willful forgetting. As Folman meets with one comrade after another, many of whom he hasn’t seen in decades and all of whose experiences paint different portraits of the incident and other events that occurred in Lebanon surrounding the massacre, we see a pattern of rueful self-awareness but also of intentional distancing. War is recalled as though a dream, not just because of the soldiers’ vague recollections but because reality is too much to face. Folman designs not an alternate history but a drastic conceptualization of subjective truth. The anything-goes freedom that comes with this sort of creative approach is only powerful by virtue of its limitations, and though Folman sometimes indulges in some wildly expressionistic flights of fancy (in one sequence a man recalls/dreams about a lifeboat in the shape of a huge naked woman, and he goes sailing off to safety on her supple, enormous body, the screen brightening from a drab gray to a surreal orange), most of his lovely vignettes stay grounded in a terrifying reality.

When Folman’s animated self visits a former army comrade now living in Holland and spots his friend’s young son sitting on a bench, Folman asks if he can make the boy a part of his project, and his friend protectively states, “It’s fine as long as you draw and don’t film.” In other words, an approximation is always better, as purporting truth on film is tricky territory. It’s an admittance of film’s severe limitations as a truth messenger, especially in the perimeters of documentary. And it takes a while to realize that what we’re watching basically is a documentary—the voice-overs are in fact the testimonies of Folman’s former fellow soldiers, and late in the film, Folman even includes a talking-head interview with a psychiatric specialist in post-traumatic experience—embellished with visual flourishes. In a way, Folman’s approach to making a narrative of individual trauma is as rigorous in its questioning of representation as the work of Claude Lanzmann: both deny film’s power to show an ultimate “truth,” but Folman’s faith in the expressionistic power of images combines with his agnosticism about the documentary form to create something unique, as well as a providing a strong rhetorical fallback (animation never can make claims to “reality”).

While some of Folman’s tactics (a predictable, emotionally contrapuntal soundtrack complete with ironically employed Mozart and rock-and-roll; tear-downs of higher-level military officials with juvenile pot-shots—a brigadier watching porn on TV while giving orders from his mansion) have a fish-in-the-barrel feel, the director often miraculously moves past clichés into difficult territories. Following the camp massacres, an Israeli commission was set up to investigate the culpability of their army and then-defense minister Ariel Sharon, and found the Israelis “indirectly responsible.” While the film doesn’t go so far as to create a severely damning portrait of guilt (neither is it an exonerating mea culpa), Waltz with Bashir is a distinct evocation of haunted minds; yes, it’s from a strictly Israeli point of view, but it’s one that seems as paralyzed by memory and doubt as the men at its core.

Its central image of slender, naked soldiers emerging from the sea in slow motion, making their way to a Beirut lit up by artillery fire, set to an evocative violin score, initially carries little more than a beautiful eroticism, but each time Folman repeats the scene (it’s shown about three times during the film), our increased knowledge of the situation paints it in a different light. Like the men it concerns, Waltz with Bashir eternally returns to the same spot; grief and guilt keep it in a sort of historical freeze frame. Because the soldiers claim to not have “seen” the massacre take place, the film ultimately denies us this view as well. Instead, Folman shows us something everyone was privileged to see: the aftermath. Folman’s decision to abruptly cut to “real” documentary footage at the end, following one of his most pointedly emotional flourishes (a sweeping “crane shot” over a line of wailing Palestinian mothers), makes for a chilling, powerful coda. Though animation has created a significant layer of remove, the protective wall it erects around the soldiers, and the film itself, is one that Folman has been slowly chipping away at, and it can only be sustained for so long. Finally, Folman refuses to deny the evidence before us. Memory is tricky, but conscience is constant.