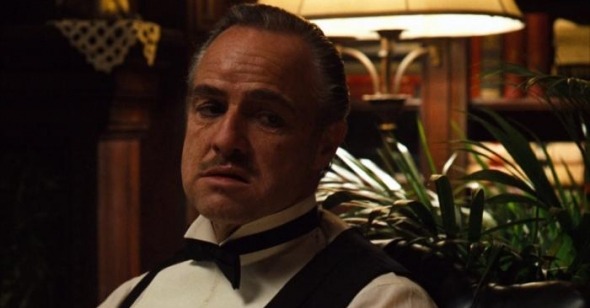 The Godfather and The Godfather Part II screen March 28 and 29, 2015, as part of See it Big, a series co-programmed by Reverse Shot and Museum of the Moving Image.

What to do with Francis Ford Coppola’s The Godfather and The Godfather Part II at this point? Of all the established, venerated, stand-alone classics—those that are no longer just movies but have become seen as monuments to movies—certainly there have been films that are more technically audacious (Citizen Kane), more psychologically jarring (Vertigo), more socially galvanizing (The Rules of the Game), more joyously devil-may-care (Singin’ in the Rain), more self-referential (8½), more narratively experimental (2001: A Space Odyssey). So what is it about Coppola’s pair of iconic films from 1972 and 1974 (let’s just forget it’s technically a trilogy for the time being) that have made them such widely agreed-upon selections for canonization, besides their enormous financial success?

One could certainly point to their inherently masculine poise as one reason: the American movies' social history is unsurprisingly a male-oriented one, and the Godfather films are pure reflections of this. Even the title suggests masculine grandeur—a pillar to which all other movies must genuflect. Or perhaps it’s the films’ ability to provide the basic exhilarations and catharses we would expect from a tale of violence, while also disallowing us to feel anything other than loss and melancholy as the result of that violence—the template for the coming decades of bloody male melodramas that nevertheless were “good for you” (see anything by Clint Eastwood in the past two decades). Maybe it’s the simultaneous star-at-sunset presence of Marlon Brando as Vito Corleone and the star-is-born narratives of Al Pacino as Michael and Robert De Niro as young Vito that cement the films as something of a Hollywood passing of the torch. Or it could be that, despite their specific focus on one crime syndicate, The Godfather films are astonishingly expansive, becoming a narrative of the first half of the American twentieth century, maybe Hollywood’s most vivid tale of immigrant life, and its most harrowing expression of the effect of wealth and capital gain on basic human decency.

Before it expands out into all directions, it starts in darkness. It’s now well known that Gordon Willis’s cinematography—not simply shadowy, but grim—was condemned by Paramount executives before the release of the film; often scenes in the Godfather films seem to be emanating from inky blackness. Right from the start, we feel like we’re in an interior space, not only literally in the womblike quarters of Vito Corleone but also deep within a void. The “I Believe in America” speech that opens the first film—delivered by an acquaintance beseeching Vito to aid him in revenge for wrongs done to his daughter— is remembered as much for the way it is shot as for the content of the dialogue; it’s a single three-minute take zooming out from the man’s face peering out of the black, before he rises to whisper something into the patient listener’s ear. Finally we cut to the solemnly wise, seen-it-all visage of Brando’s Vito, donning a tuxedo for his daughter’s wedding. Some of the power of this cut has necessarily been diluted over the years—in 1972 this was for many a shock, the witnessing of an actor’s official transition from sex symbol to desiccated shell; today Brando as Godfather is probably more widely recognizable than Brando as Stanley Kowalski or Terry Malloy. But there’s still a remarkable impact in the first reveal of this iconic jowly face. With the film’s reputation preceding it, Vito Corleone seems less like a crime boss here than a movie mogul, a Louis B. Mayer or Adolph Zukor type beckoning you closer and promising to whisk you away to dreamland.

The details of the plot to follow are so well known that they are now movie lore. Rather than regurgitate them here it’s perhaps more useful to emphasize just how elegantly, and with surprisingly swift and few strokes, Coppola moves from point A to point B, with the assistance of editors William Reynolds and Peter Zinner. This is no experimental film from the heyday of seventies American cinema, an example of auteurism run amok in which a filmmaker threw everything at the wall to see what would stick. More than anything else, the first Godfather film—written by the director and Mario Puzo, based on Puzo’s novel—is a triumph of narrative economy, despite its nearly three-hour length; each scene parcels out just enough information and detail to make every character exchange feel monumental. In this regard its legacy can be seen best today in such American television series as The Sopranos, The Wire, and Mad Men, which rarely feel like there’s ever a wasted moment, shot, or line, so attuned are they to their characters’ emotional states and situations. Think of all of the film’s major secondary characters—from pseudo adopted son Tom Hagen (a disconcertingly calm Robert Duvall) to Michael’s brothers, hothead Sonny (James Caan) and black-sheep Fredo (John Cazale); to sister Connie (Talia Shire) and her abusive husband Carlo (Gianni Russo); from Richard Castellano’s capo Clemenza to Sterling Hayden’s intimidating Captain McCluskey—they’ve all become iconic themselves, even though Coppola only gives us spare scenes and circumstances in which we get to know them.

This is perhaps where The Godfather Part II, a profoundly resonant deepening of its predecessor’s themes (what was implicit in the first, in terms of its tale of American immigration and progress, is made explicit), differs so greatly; though in many ways a stylistic continuation of the first, Part II takes more time to settle with its characters, to witness, with encroaching dread, the emotional toll their lifestyle takes on them. The single-minded attention it devotes to De Niro’s young Vito Andolini in its many flashbacks has no equal in the series (even Michael’s story is somewhat fragmented by the stories of the many other concurrent characters he interacts with); by virtue of the fascination with which Coppola shows Vito’s humble beginnings, in both the vividly evoked tenement buildings of turn-of-the-century New York and his hometown of Corleone, Sicily, which he revisits as a young adult for a vengeful purpose, the film begins to take on mythological stature. This is where an elegant, satisfying crime film begins to assume epic proportions. Coppola achieves such grandness through more attention to character than event, as reflected in the manner in which the director also rivets us to Lee Strasberg’s Hyman Roth, Michael V. Gazzo’s Frankie Pentangeli, and, of course, Cazale’s woebegone Fredo. The Godfather Part II’s epilogue is its ultimate evidence that Coppola is here mostly invested in the personal, the minute; this wallop of an ending, Michael's reminiscence of a family dinner, plays like a paradise lost.

This daring final movement never ceases to make me weep, but it’s unclear what or who I’m mourning. Can we see ourselves at all in these larger-than-life characters, who have made decisions destructive to themselves and their loved ones? If the events themselves in these films—equine beheadings, revenge killings, senate hearings—are less than relatable, cumulatively they create an intensely human saga of regret that anyone can envision themselves in. Movies have the unique ability to make us empathize with the grandiose, whether it be Charles Foster Kane or Michael Corleone. Coppola’s first two Godfather films chart the loss of principles, the selling of a soul, and the gaining of a country. So, our dreams and our fears, together in one stately, terrifying package.