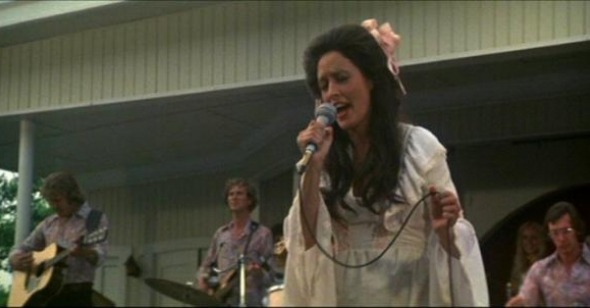 Nashville is monumental entertainment: it opens with a new anthem for the Bicentennial (“200 Years”) and closes with an image of the American flag draped over a scaled replica of the Parthenon. In around three hours, over two-dozen characters converge in Altman’s panorama of the titular city. They are politicians, reporters, cheating hearts, chauffeurs, line-cooks, second wives, first-time strippers, Vietnam vets, session musicians, backup singers, and (to the chagrin of the real Nashville) parodies of living country music stars. Henry Gibson impersonates Hank Snow as “Haven Hamilton,” as “Barbara Jean” Ronee Blakley does Loretta Lynn in the throes of a breakdown, Karen Black plays a cold-souled Tammy Wynette, and Timmy Brown sends up the “token black performer” Charlie Pride. It’s a racy piece of New Journalism, a rhinestone costume epic, a political satire in the shadow of Watergate, and above all, a backstage musical with twenty original songs, set across five days of anticipation for the climactic show, a live-televised political rally for a presidential candidate who never materializes. All in widescreen and stereo surround.

If it seems strange now that the capital of Tennessee was once pop-culturally prominent enough to stand in as a microcosm of the entire nation, keep in mind that Robert Altman didn’t choose the location; Paramount assigned the project to him. Though the director wasn’t bowled over by a rich sense of place the first time he visited (“Nashville? I couldn’t find it,” he said), the studio was onto something. The city had a certain up-and-coming appeal as a distant cousin of Hollywood. In the late sixties, the music biz edged out Bible-printing as the #1 local industry, and in 1974, the Grand Ole Opry moved its headquarters from a cramped, un-air-conditioned tabernacle downtown to a Disneyland-inspired theme park out beyond the suburbs. Opryland U.S.A. “Music City” was emerging as a moneyed mass-entertainment mecca with all the evil trappings, and Altman arrived at exactly the right time.

Nashville is a sightseeing tour in deep-focus and horizontal long-shots. Though there are occasional dramatic close-ups (watch the color drain from Lily Tomlin’s face as Keith Carradine seduces her with the Oscar-winning song “I’m Easy” from across the bar at the Exit/Inn), the film generally takes the opposite approach, avoiding shot/reverse-shot editing and clearly defined dialogue. Instead, Altman illuminates the finer points of the characters by cutting them down to size, arranging them left-to-right across the frame and stacking their voices on the soundtrack. Here the “long shot” needs to be distinguished from the “long take”; while the duration of the shots are fairly standard, the camera is physically distant from the action, such that the performances are often less in the eyes and more in the arms and legs. For this reason, watching Nashville on the small screen is like looking at a diorama in the dark—intelligible, but hard on the eyes.

Best to see it big, and hear it loud, too. This is Altman’s big audiophile movie. The sound is three-dimensional, making room not only for dialogue and music but also for sheer noise. Like a number of its contemporaries, Coppola’s The Conversation, Skolimowski’s The Shout, and De Palma’s Blow Out, Nashville combines a story about sound engineering with a technologically innovative soundtrack. Here Altman went beyond the overlapping dialogue of McCabe & Mrs. Miller and into a brave new world of controlled cacophony. The idea was to create the sonic equivalent of a zoom lens. To do this, sound designer Jim Webb invented a new system, Lion’s Gate 8 Track Sound, which combined the techniques of concert documentaries and televised golf. Instead of using traditional boom microphones, the actors wore wireless lavalier mics, as golfers do. This allowed them to improvise, interrupt each other, and roam around, facilitating a freer camera and long shots with sync sound. Multitrack recording gave the sound editors the ability to isolate and emphasize individual voices in noisy scenes and separate the unceasing stream of chatter into individual channels. For the live music performances, dozens of microphones were arrayed around the stage, feeding into additional tracks. Thus, Nashville is a rarity among musicals: shot on location, using direct, live sound.

Nashville’s scale, scope, and complexity necessitate repeat viewings. The plot is buried beneath a mountain of distracting data and sensory overload, and this can be overwhelming at first. But after about the third time it begins to feel less chaotic and more puzzle-like. We notice, for instance, that much of the exposition occurs in implied exchanges and unspoken interactions, and that no scene incorporates all 24 characters simultaneously. If we start keeping tabs on attendance, in pure Agatha Christie fashion, we learn as much about a person from where he or she doesn’t go as where she does. Further, there is a built-in pattern of wrong first impressions. Often, those who seem most obnoxious at first end up redeeming themselves by appearing in unexpected places (and vice-versa).

Altman’s most ambitious project was a commercial disappointment. But time has been kind to Nashville; far kinder, indeed, than to the Opryland theme park, which shut down in 1997 due to persistent flooding and competition from Dollywood.

Nashville played June 29, 30, and July 1 at the Museum of the Moving Image as part of the series See It Big, co-presented by Reverse Shot.