First Time [The Time for All but Sunset (Violet)] 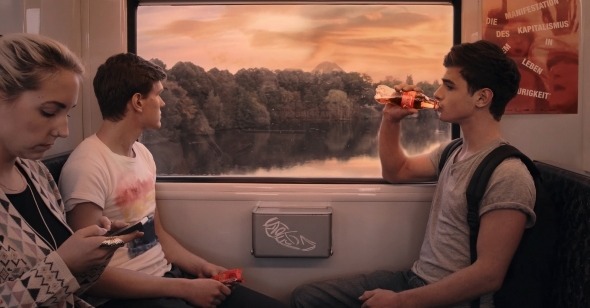 First Time [The Time for All but Sunset (Violet)]
Dir. Nicolaas Schmidt, Germany, no distributor

First Time [The Time for All but Sunset (Violet)] plays at Museum of the Moving Image as part of First Look 2022 on Sunday, March 20.

Despite running just 50 minutes, Nicolaas Schmidt’s First Time [The Time for All but Sunset (Violet)] makes room for a pre-show segment: a 1988 Coca-Cola ad featuring couples of all ages (read: heterosexual ones) finding love to Robin Beck’s power ballad “First Time.” Following this, the film presents a series of establishing shots outside a Hamburg train station, then a strobing screen of reds and oranges over which one might expect title cards. The colors flicker irregularly for about two minutes until, in one of the most radiant transitions in recent cinema, we cut to a boy (Fynn Grossmann) leaning his head on a train window, the sunlight flashing onto his closed eyelids. The flicker-film passage is here revealed to be a point-of-view shot. What may have seemed a mere formalist trifle becomes a veritable window into the eyes of the mind.

By this point, most viewers will have suspended their expectations of a conventional narrative—no doubt the intended reaction. The film’s title signals a structuring principle, with each segment offering variations on a scene-setting trope; so when Schmidt switches to a proscenium shot of the train compartment, the window centered in the frame, we prepare to settle in for the ride. The immediate setting recalls not just the stationary panorama rides of the late 19th century (glimpsed for instance in Max Ophüls’s 1948 Letter from an Unknown Woman) but also the phantom journeys and travel films of the early cinema, once popular forms that eventually fell outside the pale of institutionalized modes of representation. At one of the stations, another boy (Aaron Hilmer) gets on and sits across from Grossmann. But for now, the scenic pleasure of the journey is all.

As the film goes on, a cut becomes less and less likely—and sure enough the shot stretches out to encompass almost the entire runtime. It is no small matter, however, that First Time arrives nearly a century after cinematographer Karl Freund unchained the film camera in F. W. Murnau’s The Last Laugh (1924), for Schmidt’s locked-down frame is a choice in the way that it wasn’t previously. Accordingly, the question of what exactly he is trying to show us—the question of what is or is not of significance at any given moment—becomes an active and persistent issue. Apart from the opening TV spot, the rolling journey offers glimpses of a COVID-era Coke ad (“I’ll keep social distance from bad energy”) and an H&M poster (#HMFallInLove), both of which remind us of how advertisements work as an ironic game, reinterpreting reality to fit their own sometimes illegible ends. In a similar way—though naturally with rather different aims— First Time plays on the ambiguity of what we are meant to even see and focus on, expanding the film’s spatial journey into a realm of imaginative possibility.

Grossmann and Hilmer together suggest the prospect of a chance romance—notably queer, in contrast to the opening Coca-Cola ad—but as the film goes on, and neither of them speak to each other, the assumed connection may well be an imaginary one. Schmidt doesn’t tip his hand in this regard. Subtitled “A Common Sensations Music Movie,” First Time includes a number of music tracks that establish atone of keening melancholy, suggesting that we are indeed witnessing a repressed romantic encounter. But when, in a marvelous sight gag, Grossmann and Hilmer each drink a bottle of Coke about five minutes apart (the latter to a train busker singing a cover of “First Time”), that previous reading practically collapses into self-conscious irony. As the sun sets outside, and the film’s color palette gradually shades into the violet end of the spectrum, we might wonder whether our romantic expectations are mere projections of the mind.

In its denial of explicit “meaning,” in its structural and textural integrity, First Time has an ambiguity characteristic of the various experimental traditions that Schmidt is extending. His film is not a lyrical work in the manner of Brakhage, but nonetheless represents a turn away from the continuous rhythms of daily life (a train commute, for instance) toward the more meditative, inward dimensions of experience. Likewise, though First Time does not much resemble the works first corralled under the term “structural film” (works by Michael Snow and Hollis Frampton, for example), it displays a similar conceptual rigor, its clear segmentation and wordless progression creating a characteristic, riddle-like fusion of sensation and mental reflection. True, as in the aforementioned ads, conglomerate branding may present something of this quality as well, an aspect that has not gone unrecognized by experimental filmmakers (Johann Lurf’s 2014 short Twelve Tales Told cuts up a dozen studio logos into a stuttering, spectacular symphony of anticipation and anti-climax). But very much unlike advertising, those works we value as art—experimental films among them—are aimed not at controlling or directing our desires, but at transforming them.

Near the end of First Time, Hilmer mumbles something to Grossmann—the only words spoken in the entire film—and finally exits the train, leaving the latter somewhat dazed, as if shaken out of a daydream. His confusion is ours as well, for doesn’t that train station convenience store look awfully familiar? And sure enough, if one goes and watches the film again, one will confirm what those familiar with the U3 Line of Hamburg’s subway network already know: that the train moves in a continuous ring. We have been going round in a circle—though of course, neither we nor Grossmann can possibly feel that we have simply returned to the same point. He makes a move to grab his bag and exit the train, an action that Schmidt punctuates with an abrupt cut and a frame of solid purple, uniting the film, title and all, into an ecstatic flash of color.

When we next see Grossmann, he is alone in the same compartment, night having fallen in the interim. In one last movement, the camera slowly pushes into the train window, finally giving us an unobstructed view of the outside. This would seem to take us back to those early train views—except that, roughly a century removed from them, we are perhaps more skeptical about any claims to present reality “as it is.” Indeed, experimental filmmakers such as Schmidt may be seen as demonstrating the very limits and contradictions of such claims. With their recourse to ambiguous unities of sound and sense, where all meaning is absorbed into a complex texture of image-sound relations, they show how there is something self-contradictory about the injunction to “film what you see.”

In Art and Illusion, E. H. Gombrich’s enduring study on the psychology of pictorial representation, he writes that “the true miracle of the language of art is not that it enables the artist to create the illusion of reality. It is that under the hands of a great master the image becomes translucent.” Whether or not one is prepared to declare Schmidt a master, his images have something of this translucence: they present a vision of the everyday imbued with all the colors of the mind, where every end is but a beginning, and where every sunset is seen as if for the first time.