A Man and a Camera 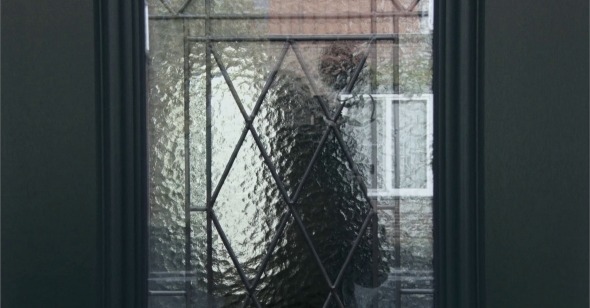 Tell Me Why
By Vikram Murthi

A Man and a Camera
Guido Hendrikx, Netherlands, no distributor

A Man and a Camera plays Sunday, March 20 at Museum of the Moving Image as part of First Look 2022.

Split into three acts (plus a prologue and epilogue), Guido Hendrikx’s 2016 hybrid documentary/essay film Stranger in Paradise follows a Dutch actor (Valentijn Dhaenens) posing as a teacher who speaks to a classroom full of real-life migrants about what to expect if they emigrate to Europe. In the first act, the teacher welcomes a group of male African migrants before saying that they deserve to know “the truth.” In a neutral affect that eventually betrays smug condescension, he systematically details a virulently xenophobic perspective on the migrant crisis—how they will bankrupt the welfare state that his father’s generation built, that they threaten European cultural values with their presence, and the sheer impossibility of differentiating Muslim refugees from potential terrorists. He blames left-wing idealists for painting Europe as a paradise and convincing the world that migration is financially sustainable. The teacher “suggests” that the men return to their home countries and fix their own political problems instead of overcrowding his continent. “We don’t want you here,” he calmly tells them over their protests.

In this first act, Hendrikx here confronts viewers with the queasy ethical tension that stems from a plainly uneven power dynamic. He deliberately evokes right-wing ideology instead of privileging access to the minds of the migrant community, who are spectators to their own dramatized dehumanization. The sequence’s transparent staging will raise the blood pressure of anyone with an ounce of compassion: a blond, white actor, credited as “Europe,” essentially berates real Africans for seeking the protection of a continent that colonized their countries and left them in a state of sociopolitical instability. (That the migrants were aware of the nature of the sequence beforehand doesn’t mitigate its hostility.) The classroom setting lends authority to the teacher’s invective, with him controlling the direction of the dialogue as well as the opposition. The language barrier between the teacher and the migrants, who speak in “broken” English, also shifts control away from the minority group despite their intelligent arguments against the teacher’s oft-racist claims. Hendrikx clarifies this potent provocation in the film’s second and third acts, which respectively adopt a softer, more dialectical approach: this is Europe for the most vulnerable among us, who don’t have the relative safety of a classroom (or theatrical staging) to experience this antagonism, and no film can save them from it, something that Hendrikx acknowledges in Stranger in Paradise’s epilogue.

Hendrikx’s latest feature, A Man and a Camera, continues this exploration of power imbalances, but this time outside of an explicitly political framework and through a more individualist lens. The film’s premise/gimmick features Hendrikx behind the camera as he approaches strangers’ doorsteps and stands there waiting for any kind of encounter. The main rule of this Tom Green-esque stunt is that Hendrikx will not speak or respond in any way to the person being filmed. Some people predictably express confusion or irritation; one person thrashes the camera. Yet as the film progresses, people start to react with curiosity to Hendrikx’s presence, clearly drawn into the enigmatic company of the camera as a free-floating entity. A few happily invite Hendrikx into their homes for long periods of time. One man does so repeatedly.

Hendrikx’s experiment, though seemingly more impish, is as much a provocation as his more controlled confrontation in Stranger in Paradise. To state the obvious, there’s something eerie and potentially dangerous about a man who silently films you outside your house. The initial reactions documented in A Man and a Camera mask some palpable fear beneath disbelief or annoyance, especially when they realize that no explanation for Hendrikx’s appearance is forthcoming. In the interview provided in the press kit, Hendrikx says that aggressive reactions were exceptions rather than the norm, and that he always carried around a piece of paper explaining the footage wouldn’t be used without permission for safety. Not to make broad generalizations about national characteristics, but it’s simply too easy to imagine an American version of A Man and a Camera that speedily turns violent.

A Man and a Camera frequently entertains on an episodic level, but what fascinates is how quickly some of Hendrikx’s subjects deduce that they are in control of their involvement. One of Hendrikx’s rules, per the same interview, was that as soon as the person being filmed opens their door they “direct” the scene. They decide how long the encounter lasts and what occurs during it. A pair of elderly grandparents invites Hendrikx inside to watch their grandchildren play in the backyard. Later, Hendrikx returns and they invite him in again only to simply go about their evening, eating dinner and watching TV, all but ignoring Hendrikx until it’s time for them to go to bed. A cheery Dennis Farina lookalike keeps inviting him into his home, often to meet his extended family, all while trying to determine the limitations of Hendrikx’s silence. (At one point, he notifies Hendrikx that someone in his neighborhood group chat has called the cops on him.) It’s a neat subversion of both the camera’s inherent authority and the inevitable passivity of documentary subjects. Hendrikx is decidedly not the author of any of the real-time encounters, only an observer, with the camera acting as a literal recorder. All of Hendrikx’s subjects hold all the power in their exchanges, whether they know it or not.

“Is there a deeper meaning to this?” an irate stranger asks Hendrikx early in the film, followed by a series of people asking variations on the question. Unlike Stranger in Paradise,which is a thrilling yet closed text, A Man and a Camera firmly, admirably resists neat interpretations. It’s possible to read the film as a portrait of the Dutch people, though because Hendrikx purposely filmed in “less familiar places,” it’s difficult to claim it’s an encompassing characterization. As with most reality show-adjacent texts, A Man and a Camera could be interpreted as a commentary on performance in the digital age. Many of Hendrikx’s subjects assume that they’ll be featured on the news, and it’s possible that their desire to be on camera, no matter how nascent, spurred their interest in Hendrikx. When Hendrikx revisited his subjects to obtain release forms, he discovered that some were religious, but it’s unlikely that faith connects every person who invited him in. Politics occurs a couple times. One man quickly turns over Peter Longerich’s biography of Adolf Hitler prominently displayed on his coffee table. (“The title doesn’t appeal to everyone, I’m afraid,” he chuckles. “It’s about history, so it did appeal to me. But it won’t appeal to everyone, I think. Not anymore.”) The Farina lookalike casually mentions to his grandson, “As long as he’s not from Democrats 66,” the social liberal Netherlands party, but it’s unclear on what ideological grounds he opposes the party.

What we’re left with is merely a spectrum of confidence in Hendrikx’s motives. He mines the tension people feel with a dispassionate, quasi-otherworldly presence. Some find it inherently suspicious while others want him closer, not necessarily out of some desire for connection but mostly out of a need for answers. That Hendrikx never provides any resolution only further begets the tension between him and his subjects, as well as between him and the audience. With Stranger in Paradise, the viewer is complicit in the ineffectuality of activist documentaries to help their subjects, but with A Man and a Camera, they’re complicit in the mystery of why someone would want to capture ordinary life without an agenda.