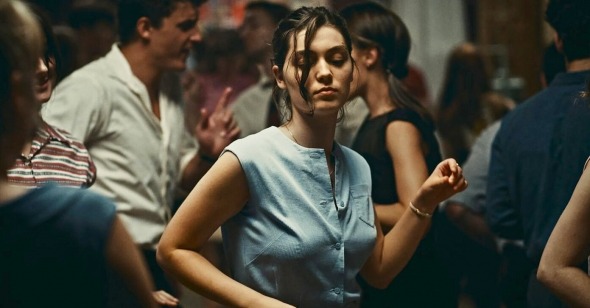 Through Her Eyes
By Susannah Gruder

Viewers watching this year’s Sundance films are being asked to interrogate their ways of seeing, coming up against films that examine perspective by more thoroughly investigating the relationship between who’s behind the camera and what we see on screen. The choice to nestle Nina Menkes’s documentary Brainwashed: Sex Camera Power in the middle of the festival had the effect of slightly muddying the impression of any film seen prior, and fully coloring those that followed. Halfway between a video essay and an MFA lecture, Brainwashed is a study in the ways that film has portrayed women through an almost exclusively male perspective throughout its history, and how this has contributed to a culture of female disempowerment. Yes, we know about the “male gaze,” but Menkes spells out its power, albeit a bit simplistically, primarily concerned with how it prevents female subjectivity on screen, with 175 film clips and a trove of interview subjects, including Julie Dash, Eliza Hittman, and the originator of the term itself, Laura Mulvey.

Menkes, the filmmaker behind independent gems like Queen of Diamonds (1991) and Phantom Love (2007), takes issue more with filmmakers’ creativity than their ethics, pointing out patterns and technical styles of filmmaking that tend to subjugate women, and the ways that we’ve failed to evolve past them. So ingrained in our collective consciousness that we can hardly detect them, these include the subject/object relationship (the camera mirroring the perspective of Roger Ailes as he ogles a women in Bombshell), framing (showing a woman’s disembodied legs, butt, or breasts in films like Old Boy), camera movement (slowly panning up and down Cathy Moriarty’s swimsuit-clad body in Raging Bull), and lighting (Rita Hayworth lit in a 2D, dislocated fantasy space in The Lady from Shanghai). These techniques, Menkes argues, seduce women into powerlessness, convincing them that the only way to gain agency is through physical beauty. “Glamor is a bait and switch,” she says via narration.

The film’s structure is irksome at times: Menkes uses footage from an actual lecture she gave on the subject (she’s on the faculty at CalArts), with a distracting Vertigo-inspired score in the background throughout many of her clips, in a nod to the mother of all male-gaze films. For many, these arguments may not be new, and the question of what to do with the “problematic” films that continue to be seen and loved still looms large. Menkes does take the time to highlight some filmmakers, both male and female, who have succeeded in capturing female interiority on camera (Nietzchka Keene, Gus Van Sant, Dorothy Arzner, to name a few), moving away from what’s wrong in Hollywood, and focusing on ways people are breaking free from traditional ways of seeing. It’s a welcome shift at the end of the film, though it would have been more persuasive to include more clips of this nature. Regardless, Brainwashed is a film that deserves to be seen, discussed, and questioned, just like the works she features.

In virtual Park City, changes are happening a little faster, and a wealth of films have presented the female experience through a subjective lens. No film did this better than Happening, whose director Audrey Diwan introduced the film by saying that she did not want us to simply watch her main character, she wanted us to be her. Anne, played with fierce dedication by Anamaria Vartolomei, is an ambitious high school student in France studying for her college entrance exams in 1963. An independent thinker, Anne refuses to hide her desires, flagrantly dancing and flirting with young men, even as school bullies label her as loose. Her more chaste friends flirt as well, but staunchly draw the line when it comes to sex, it seems, adhering to their country’s lack of tolerance for pre-marital relations, and punishment or prison time for anyone who even attempts an abortion. When Anne realizes she’s pregnant, she begins an odyssey to find a method of abortion, from doctors (who shame her for even suggesting it), to friends (who don’t want to get involved), to self-induced methods. The scene where she attempts to end the pregnancy herself is brutal to witness, and unsuccessful for Anne.

The film has the same urgency and intimacy of Eliza Hittman’s Never Rarely Sometimes Always, showing how alone a young woman can feel in the face of a desperate situation. You can sense her anxiety first-hand as we follow her from one failed attempt to another—her stress mounts until she’s completely worn down physically and mentally. The cinematography by Laurent Tangy captures Anne and her world in the golden light of southwest France in the summertime, its nostalgic, sun-bleached color palette suggesting that we’re in another era, without too many overt signifiers of the time. Given the ways that women’s bodies continue to be controlled, you’d be forgiven for mistaking it for the present day. Diwan shows the link between shame and desire, with those around Anne pushing her to feel guilty for acting on her impulses. “Everyone here wants the same thing, but no one will admit it,” Anne says knowingly to a friend at a dance. Her determination—to go to university, to have a family and a career on her terms, and not to apologize for her desires—makes Anne a remarkable character to follow, and the hero of her own story.

In Gentle, from Hungarian directors László Csuja and Anna Nemes, we meet another woman at war with her body. Edina, a female bodybuilder making a name for herself on the scene, is coming to terms with a career that’s slowly killing her. Played by non-actor Eszter Csonka, a bodybuilder in real life, Edina follows a strict diet and workout routine, combined with a heavy regimen of steroids, which are beginning to impact her wellbeing. She and her boyfriend Ádám (György Turós), a former bodybuilder who works as her trainer, are suddenly unable to afford the drugs she needs to compete. In secret, Edina finds work as a paid escort, allowing married men to admire her physique, and discovers that she prefers this to being at home or at the gym with Ádám. While Edina conveys strength on stage, her muscular body spray-tanned and clad in a sequined bikini, she’s soft-spoken and shy in reality, shrinking before Ádám’s overpowering presence. At one point he stress-eats three rice cakes in the gym locker room before throwing the rest at the wall and chastising Edina for her performance—a moment of comic levity in an otherwise tense scene. The film’s title speaks to Edina’s desires: for love that doesn’t hurt, for a job that doesn’t take such a toll on her body, for a bit of nurturing when she needs it. The film is bathed in a pale green light that diffuses the film’s hard edges, especially during one dreamlike encounter with a frequent client. Edina is summoned to a jungle-like setting shrouded in fog, and we watch as the two share a dance beneath the mist. Edina seems to fade into her surroundings, and it’s clear that she’s enjoying herself as much as he is, sharing her client’s fantasy and learning what real tenderness can be like.

In Sharp Stick, Lena Dunham’s return to filmmaking after 12 years, we’re let into another woman’s fantasy world. It’s mostly that of Dunham, who conceived of the project during quarantine, creating a highly personal, though at times emotionally illegible work of fiction. Never one to shy away from depicting female desire, Dunham here gives us an unabashed celebration of experimentation without shame, chronicling the journey of Sarah Jo (Kristine Froseth, fully committed to her quirky performance), an innocent 26-year-old in L.A. discovering her own sexuality. Still a virgin, despite the sexual liberty of both her five-times divorced mother (a charming wine-drunk Jennifer Jason Leigh) and sexy TikTok star sister (a magnetic Taylour Paige), Sarah Jo embarks on a mission to be deflowered. Sarah Jo’s character is slippery—her naiveté about sex is implausible given her age and social surroundings. She claims she’s out of step with her peers due to a radical hysterectomy she had at age 15—she subsequently went through menopause at 17 and worries about what sexual partners might think of a scar from the procedure that runs up and down her pelvis. One can imagine that this world exists parallel to ours, perhaps in Dunham’s head. It’s a place where, because of her immaturity, a woman takes an active role in her first sexual experience and is not weighed down by standards of passive femininity or body insecurities.

Dunham and director of photography Ashley Connor bring us deep into Sarah Jo’s inner life, giving us her personal, dizzying experience of a mushroom trip, narrating entries from her diary, and getting up close with her as she has her first kiss (and many other sexual firsts). This highly subjective film isn’t immediately decodable in large part because it breaks away from a number of the traditional filmmaking methods Menkes highlights, but also because at times it feels narratively underdeveloped. The film ends just as Sarah Jo starts to feel at home in her own body and mind, and we wish we could travel with her for a bit longer to see her grow. To watch a young, beautiful woman be weird on screen, messily eating giant spoonfuls of yogurt, playing with her scar, and having a stockpile of conflicting, complicated emotions does seem to rebuff the “male gaze,” if just a little bit. Sharp Stick is successful in its strangeness, though it’s perhaps more cathartic for Dunham than it will be for audiences. Either way, I respected the choice to offer up such a portrait of a woman’s developing, daring desires.