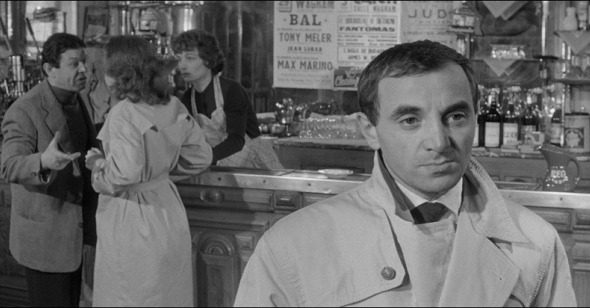 In this weekly column, one writer will send another a new piece of writing about a film they have been watching and pondering over, in the hopes that this will prompt a connection‚ÄĒemotional, thematic, historical, or analytical‚ÄĒto a different film the other has been watching or is inspired to rewatch. This ongoing column will be in the spirit of many past Reverse Shot symposiums, in which writers found connections between seemingly disparate cinematic works, and it will also help us maintain personal connection among our writers and our readers at this uncertain moment.

I have a vivid recollection of seeing Aki Kaurism√§ki‚Äôs The Match Factory Girl at a movie theater in New York. I was still living in Eastern Europe when the film was first released in 1990, so it must been at the end of that decade, when I was venturing wholeheartedly into cinephilia with my then-boyfriend and now-husband. I still recall that distinct feeling of sitting in a crowded movie theater, our startled and delighted laughter as we watched the vengeful but mousy title character systematically finish off her nemeses. I can‚Äôt recall the entire plot off-hand, but the atmosphere that night, after the screening, was nothing short of magical: a sense that Kaurism√§ki‚Äôs deadpan humor, his approach to suffering, inequality, murder, and noir‚ÄĒwhich felt refreshingly mundane and anti-noirish‚ÄĒhad somehow tinted the night and made it extraordinary.

My memory places our viewing at the Museum of Modern Art‚ÄĒthe gusts of nippy air as we emerged onto 53rd Street; the quick sprint to the underground metro station; the E, F, and R carrying us back to Queens with the thrill, the oddball jests still careening in our heads. I think it was probably that viewing, and my sharp recollection of the first Kaurism√§ki film we had watched together‚ÄĒI know, how romantic!‚ÄĒthat made me recently want to return to the director‚Äôs filmography.

Here we are, in S√£o Paulo, Brazil, thousands of miles away from New York, each day tuning in with family and friends to compare notes on how unspeakable and vertigo-inducing our parallel COVID curves have become. On weekends, we sit in front of our film-projector screen, in the darkness of our living room, just as we used to sit cooped up in my parents‚Äô basement, entranced by the latest videocassette we had picked up at Kim‚Äôs. Kaurism√§ki‚Äôs poor girl who takes revenge on the more powerful seems so awfully apt now, at a time when so many workers struggle to pay rent and eat, while Wall Street and corporate America emerge strengthened (became both bigger and more callous) after enormous bailouts.

So we circled back to Kaurism√§ki, and Ariel, the second film in his Proletariat Trilogy, following Shadows in Paradise and preceding The Match Factory Girl. Ariel correlates beautifully with my then and my now: then, in 1988, when the film was released and I still lived behind the Iron Curtain; now, when we are searching for a bit of solace, signs of solidarity, and glimmers of romance in our isolation. The ‚Äúthen‚ÄĚ factor is undeniable: Ariel‚Äôs Finnish social landscape is decidedly rundown working-class (it opens in a mine where our protagonist, Taisto, played by Turo Pajala, is working), with jobs scarce and not paying much, with small grocery stores looking half emptied, an occasional iconic Coca-Cola in a glass bottle, women behind the counter languid and bored, and outdoors invariably frosty. So much of this speaks to my Eastern-Block spleen: the cold, the gloom, the paucity of products, a nearly socialist austerity of interiors. But it also reflects the way that American culture trickles into this world, as a longing for adventure, independence, goods.

In the film, Taisto‚Äôs journey starts with such a consumer good: his depressed coworker bequeaths him his sleek, cream-colored Cadillac convertible, before he excuses himself to the bathroom in a bar and promptly shoots himself. The doomed friend has warned Taisto that he was ‚Äúdone with this shit,‚ÄĚ whatever the nature of this ‚Äúshit‚ÄĚ may be, ‚Äúbut don‚Äôt do as I do.‚ÄĚ And so Taisto takes this vague advice to heart, packs his bags, and sets out into the unknown. First, however, he grabs the Cadillac from a wooden shed where it must have been parked forever, and takes off for the city. As Taisto drives out, the shed simply falls to pieces. With Kaurism√§ki, the magic is always in such details.

The city comes with its own tropes: there‚Äôs the quick pulse of rock-and-roll, but also thugs, who immediately single out Taisto as an easy target, clobber him and steal his cash. By chance, Ariel then stumbles upon a hard-working divorc√©e, Irmeli (Susanna Haavisto), and her little boy. The rest is pure dramedy‚ÄĒpart romance, part gangster parody, as Taisto gets arrested trying to rob the gangsters who robbed him, escapes prison, and trumps the mobsters.

Ariel is a caper fueled by working-class solidarity, starting with the warm-hearted Irmeli, who goes from giving out tickets in the street to working in a meatpacking plant, to Taisto‚Äôs prison buddy, the mastermind behind their escape. There‚Äôs immediate class recognition: after Taisto is mugged and finds work at the shipyards, he shares a moment with the lingering dock workers who have taken the radio out of his open convertible to listen to. There are no hard feelings over this near-theft, almost no sense of property ownership. Instead, they all pile into Taisto‚Äôs convertible and help him find a homeless shelter. Even when Taisto later takes revenge on his attackers, there‚Äôs a sense that while Kaurism√§ki‚Äôs accidental heroes may be a bit amoral in their will to survive, they‚Äôre also kind to fellow sufferers.

I have no idea if Kaurism√§ki was thinking about Shakespeare‚Äôs The Tempest when he chose the title for his film. But both are romances that hint at sea adventure. After some hilarious complications, Taisto gets back his money; with Irmeli‚Äôs help, he evades the police and secures a passage for the whole family to America. As they are being smuggled out of the Finnish port by night, their rickety boat appears to float magically ahead, and the giant bulwark of the ship, named Ariel, comes into view. The dreamy soundtrack picks up, with ‚ÄúOver the Rainbow‚ÄĚ in Finnish. Lights twinkle warmly on the horizon. If only we were all looking to a future so bright. ‚ÄĒEla Bittencourt

Noir and anti-noir, gangster parody, jovial capers. Ela, these are all things I like. Reading and rereading your piece, I found myself latching on to these cues, as well as a few sweet sentiments: magic in the details, glimmers of romance in isolation, and, foremost, a giddiness‚ÄĒa joy shared with loved ones in the cinema. All this makes me think of Fran√ßois Truffaut‚Äôs Shoot the Piano Player.

Less audacious than its predecessor, The 400 Blows, and less liked by audiences at the time, Truffaut‚Äôs 1960 film now stands as a quiet cornerstone of the French New Wave. It has a lot in common with Ariel‚ÄĒthe snow, the suits, the strangeness. It too combines American and European sensibilities; the film is adapted from a novel by David Goodis, one of those American pulp writers the French loved so much. And, also like Kaurism√§ki‚Äôs films, it mixes humor with sorrow, flits between genres, and presents a world that is knowingly cinematic.

Shoot the Piano Player is quick to reveal its mac√©doine nature with a heel turn in its opening scene: a man is on the run, then, he runs into a pole. We immediately shift modes, from chase sequence to comedy, as another man‚ÄĒa stranger‚ÄĒcomes over to help, slapping him in the face a few times, friendly-like, and gets him back on his feet. Danger suddenly abated, the two are free to walk and talk for a while, about women and children and other things that might concern middle-aged men. It‚Äôs a meet-cute that serves no other purpose in the film, but as the Good Samaritan imparts: ‚ÄúSometimes it helps to spill your guts to a stranger.‚ÄĚ

One of the presiding themes of these Connected essays is film‚Äôs capacity to therapize. (Although, I very much like Chloe Lizotte‚Äôs alternative, ‚Äúnarcotize.‚ÄĚ) It seems that all films, no matter how bleak, offer some sense of escape. One reason Shoot the Piano Player is useful here is that its protagonist, Charlie Kohler‚ÄĒonce Edouard Saroyan‚ÄĒis living his own escapist fantasy. He has abandoned his former life as a famed concert pianist to play nights at a local bar. Truffaut‚Äôs film works as a kind of corollary to Casablanca in this way. Both Rick and Charlie take refuge in a non-place to escape reality. (Less useful is that they both do this at a bar‚ÄĒif only!)

As you and others have mentioned, Ela, we are all in mourning for our former lives. We are all isolated in this non-place. Rather than play piano, we watch movies, which sometimes offer small comforts‚ÄĒRaoul Coutard‚Äôs black-and-white images of snow, for example, provide a welcome salve for the New York summer. Cinema is a less a cure than a palliative in this way. Its therapy is only temporary. After the credits, reality comes crashing in, like Charlie‚Äôs idiot brother (the man who French-kissed a lamppost in that earlier scene), and drags us back to where we belong.

Late in the film, having been drawn into his brother‚Äôs schemes, Charlie laments a kind of genetic predeterminism. ‚ÄúSo now you‚Äôre a killer in a family of thieves,‚ÄĚ he says to himself, walking in circles. ‚ÄúIt‚Äôd make a good poem. A comic one, of course.‚ÄĚ He has done everything in life to eschew the criminality of his brother, but it has found him nonetheless. Charlie is certainly an ill-fated hero. He seems doomed to live out the same miseries over and over. In his previous life, he rose to prominence only because his wife accepted an indecent proposal, and her suicide is what drives him to adopt a new identity. There at the bar, he meets L√©na, a waitress, and falls in love, though he eventually gets her killed, too. In one of Truffaut‚Äôs cruelest, most fatalistic moments, he introduces another waitress at the film‚Äôs close. Charlie shakes her hand, and we surely know what happens next. This looping‚ÄĒfalling in and out of new worlds‚ÄĒagain reminds me of how we live now, and how we use movies to escape. When nature has teamed up with an incompetent state to keep us isolated and afraid, it is hard not to blame such powerful enemies as ‚Äúfate.‚ÄĚ

Unlike Ariel, Truffaut‚Äôs film does not end on an image of hope. It shows Charlie back at the bar, in front of his piano, playing the same old song. Albert Camus once said that, despite his infinite toils, we must imagine Sisyphus happy. Charlie is too self-aware for that. Here he is again at the foot of the mountain. As I watch America‚Äôs death toll trend upward for the second time, I can only hope that this is the last hill we will have to overcome. ‚ÄĒJames Wham 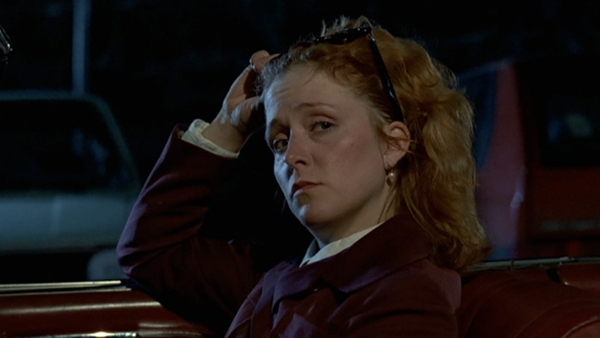