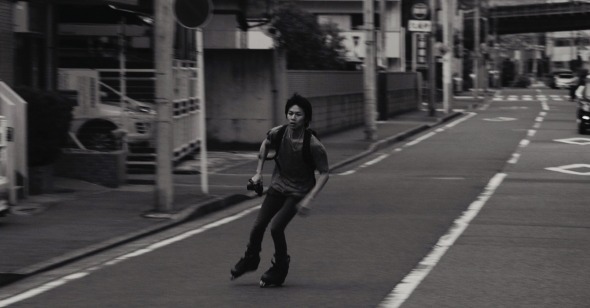 Always Somewhere
Daniel Witkin on Out There

Out There plays Saturday, January 7, with Takehiro Ito and Chun Chih Ma in person, as part of Museum of the Moving Image’s First Look 2017.

Chun Chih Ma has a wiry frame and wears a dense mop of black hair. He enjoys roller-blading and is pretty good at it, spending a healthy amount of his time speeding around Tokyo, with only occasional falls. As the subject and protagonist of Takehiro Ito’s Out There, he is introduced speaking with the director’s onscreen avatar (Haruo Kabayashi) in the latter’s plainly furnished office. Though friendly, their dialogue is ambiguous—it’s unclear whether what we’re watching is a documentary interview, or audition tape, or how much contact, if any, the two have had beforehand. “Maybe I just want to live in a movie,” Ma tells his interlocutor. At intervals throughout the film, we’re returned to moments of their ongoing conversation, which feels almost like a chipper, talkative variation on the smitten screen tests of Andy Warhol’s superstars. Ito evidently wants us to consider Ma as existing at the intersection of character, performer, and individual, and even as a sort of author, working to tell his own story. The film itself is likewise drawn to liminal spaces, pitched between Ito and Ma’s points of view as much as it explores the line between documentary and fiction and the gap between the director’s native Tokyo and his subject’s hometown, Taipei.

The film’s ostensible plot concerns the efforts of the downbeat Japanese filmmaker, imbued by Kobayashi with a certain hangdog bearing—it’s frustrating work, this making of films—as he attempts to reignite a stalled project with the help of a pushy producer. After a number of somewhat chilly meetings, managed via a steady stream of cigarettes and a single, ubiquitous bottle of vodka, he casts as his lead one Chun Chih Ma. The leading man is himself preoccupied with the question of whether to remain in Japan, return to Taiwan, or go someplace new (perhaps the United States), as well as a flirtation with the film’s female lead, a pretty local actress named Ayako (Ayu Kitaura). This setup, however, works less as narrative than as an inception point for numerous complementary and competing layers of fiction and reality, including the test footage for the film-within-a-film, scenes relating to its production, footage of Ma’s life in Tokyo (themselves in turn blending documentary and scripted material), and scenes of Ma’s family life in Taipei, including 16mm sequences that originated as part of a different project, a documentary on the life of filmmaker Edward Yang. These elements are arranged in a nonlinear fashion, and the film moves between them in a slippery, restless fashion, taking after its peripatetic subject.

As the film’s subject, Ma comes off as a strikingly normal young man, with a genuine attentiveness and ready smile. “I just want to see other places,” he tells the onscreen director in characteristically earnest fashion, “And I want to know what life means.” Where characterization is concerned, Ito relies heavily on these scenes of verbal exposition, which are unobtrusively edited to convey a sense of duration as well as a certain reflective, observational distance. In addition to being interviewed himself, Ma conducts interviews with his parents, who tell the story of how the family came from the mainland to Taiwan and give us glimpses into his past. In its focus on temporality as well as its overt interest in character and actor as inextricably linked but ultimately distinct entities, Out There gently recalls another experimentally minded coming-of-age story, Richard Linklater’s Boyhood. Yet while Linklater’s film concerned itself head-on with personal development, Out There is above all preoccupied with the evocation of a particular moment, possibly on the precipice of growth but firmly embedded somewhere between childhood and maturity. All in all, the character’s trajectory is not unlike his frequent solo roller-blading escapades around the metropolis: movement without destination, exploration with little outward change, the whole thing coalescing into an atmosphere of mellow alienation.

But if Ma doesn’t seem to undergo dramatic change over the course of the film, that may have less to do with him than with the filmmaker, who has his own particular areas of interest. Ma’s story plays less like inertia and more like experience being converted into memory in real time. While the younger Ma tends to focus on his next steps, the filmmaker often gravitates toward personal recollection and the historical past, sometimes dipping into a plainly nostalgic register. Ito’s preoccupation with memory is especially evident in the depiction of Ma’s relationship with the wholesome Ayako. He tends shoot’s the pair’s rather chaste courtship from a distance, draining it of much dramatic tension while lending it a sweetness occasionally bordering on the cute. At one point, a scene of Ma and his girlfriend dancing is paired with voice-over of the former’s mother describing the dances of her youth back in Taiwan, placing his experience within a historical and even genealogical continuity. The filmmaker’s onscreen counterpart likewise cautions against Ma’s feelings of dislocation, telling him face-to-face, “You’re alive now. You might be here or there, but you’re always somewhere.”

Here or there and always somewhere, Taiwan itself turns to be the most crucial of the film’s liminal spaces. The nation’s recent history has lent itself to some of cinema’s most pointed explorations of modernity, from the ruminative anti-epics of Hou Hsiao-hsien and Tsai Ming-liang’s achingly poetic portraits of alienated individuals to the output of Edward Yang, who, despite his untimely death, stands among the medium’s greatest artists of city life. If Ma declares that he doesn’t know where he belongs, Ito subtly seems to imply that perhaps his place is back home in Taipei, which is shot in vibrant color that shows to a certain advantage against the glossy coolness of Tokyo, captured in digital black-and-white.

Likewise, the scenes with Ma’s family have a warmth recalling home videos, with Ma’s parents reflecting on the more recent past. Despite the prominence in the film of Tokyo, Taiwan’s former colonizer, the greater foreign presence is the United States, whose influence looms over the family’s story. Ma’s mother recalls being awestruck by the wealth depicted in Hollywood films, while his father recounts the prolonged and conflicted decision over whether or not to emigrate. “America,” he concludes, “is by no means a place for everybody.”

For all its efforts to evoke the in-between and somewhere else, Out There nevertheless maintains a certain immediacy. Ito’s 16mm footage, originating from his documentary project on Yang, has a distinctly meditative, quasi-structuralist quality. Richly verdant shots of rain falling into a pool of water echo certain of the plaintive earthbound images in Tarkovsky’s similarly memory-besotted Solaris. Despite its somewhat extraterrestrial title, it’s at least as much a film about the here and now.