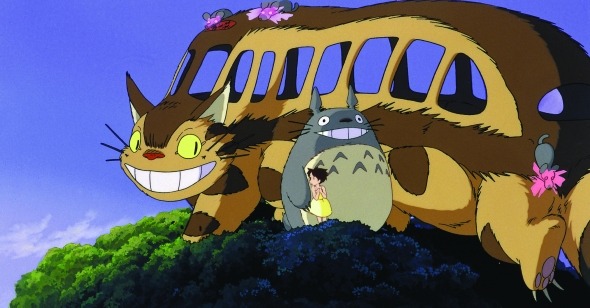 Get on the Catbus
Nick Pinkerton on My Neighbor Totoro

Hayao Miyazaki’s original “Project Plan” for his animated feature My Neighbor Totoro, dated December 1, 1986, appears in the book Starting Point, 1979-1986, a sort-of memoir in the form of the director and draftsman’s collected ephemera. The concept of the film-to-be is given as follows:

“My Neighbor Totoro aims to be a happy and heartwarming film, a film that lets the audience go home with pleasant, glad feelings. Lovers will feel each other to be more precious, parents will fondly recall their childhoods, and children will start exploring the thickets behind shrines and climbing trees to try to find a Totoro. This is the kind of film I want to make.”

The final film, a brisk 86 minutes, was released to theaters some fifteen months later. This is a lot of time and work to pour into a project with such simple stated goals, but nothing requires so much effort as the appearance of simplicity. The results have been, to say the least, amply rewarded. The anime-centric Japanese magazine Animage awarded My Neighbor Totoro their 1988 Grand Prix. Akira Kurosawa expressed his love for the movie’s twelve-legged “nekobus” (catbus). In a list of the “50 Greatest Animated Films” arranged for Time Out by Terry Gilliam, Totoro was ranked #1. When Miyazaki announced his retirement shortly after the release of his eleventh animated feature, The Wind Rises, in the summer of 2013, the collective ululation of lament might’ve registered on the Richter scale.

Everyone, it seems, loves Miyazaki and Totoro—which for certain personalities is a red flag. When I worked at an East Village video store in the early aughts, I was immensely distrustful of the toff parents who would come in with their designer children every Saturday looking for something, anything by the Great Miyazaki. Hell, if Hanna-Barbera was good enough for me, wasn’t it good enough for their posh little darlings? Then, only a couple of years ago, I actually got around to watching Totoro—followed in short order by the entire Miyazaki filmography. Thus has a little experience spoiled many a perfectly good blowhard opinion. Now I am contrite, and I am climbing trees to try to find a Totoro.

My Neighbor Totoro begins with a father and his two little girls, Satsuki and Mei, arriving at a new house in the country. The year isn’t given onscreen, though Miyazaki’s storyboards place it at 1955. The precise location is later identified as Matsugo, near Tokorozawa, about twenty miles due west of Tokyo—today a bedroom community, but then still sufficiently rural that children would occasionally get a day off of school to tend to farm duties. Mei is around four, at once preternaturally assertive and in awe of her older sister, whom she follows everywhere, and whose every utterance she echoes. Satsuki is just preadolescent, though she has already begun to take on adult duties in her mother’s absence, making lunch for the family when dad sleeps in and generally taking responsibility for Mei while he’s at work. The girls’ mother is being held at a hospital with an unspecified ailment, and they’ve moved so that they can be nearer to the sanitarium, and so she can have fresh air when and if she gets out. There is an element of autobiography here—Miyazaki’s own mother was hospitalized for spinal tuberculosis when he was a boy—and there is also a great deal of the director in Kanta, a boy around Satsuki’s age with an enthusiasm for classroom doodling and model airplanes, who takes a fancy to the new girl which manifests itself mostly in sullen, silent hostility.

Father now has a lengthy daily commute to the university, where he is an archaeology professor. A sense of open space and of distances to and from home is essential to the movie—all of this new space can seem both full of frolicsome possibility, as when the girls first see their big new backyard and immediately set to tumbling around it, and full of potential danger, as when Mei goes missing in the film’s final act, leading neighborhood volunteers expecting the worst to drag a pond for her. Scale is exaggerated to provide a child’s-eye perspective: the big camphor tree in the family’s backyard, a crucial character, appears to be approximately the size of Yggdrasil.

In the shadow of the tree, the girls make their own fun. One idle afternoon, Mei follows a trail of acorns and it leads her to first one furry biped—something like a baby chick with pointy ears—then to another, slightly larger. She chases them both into the overgrowth surrounding the big tree, like Alice after the White Rabbit, tumbles into a mossy alcove whose entrance is hidden among the tree’s roots, and there finds the largest of these creatures, a two-ton plushie she crawls all over as he slips in and out of a muttering slumber. She demands the creature’s name, he replies with a combination of sounds that is nothing like “Totoro,” and so Totoro it is. It is one of the film’s most humorous touches that Totoro always accepts the interference of humans into his domain quite nonchalantly, as when, some time later, Satsuki has a Totoro sighting of her own. She and Mei are waiting at a bus stop in the rain for their father, to give him his umbrella when he arrives home. Mei drifts off, and Satsuki hoists her sister onto her shoulders. A toad, sitting in the muddy road, croaks. Satsuki peers under the fringe of the umbrella, and catches sight of an enormous paw. She looks up and sees Totoro waiting beside her, going about his business as though it were the most natural thing in the world. In the manner in which the scene is sculpted through shot selection and tempo, its teasing of anticipation, its disappointment and ultimate surpassing of expectation, it is as fine a piece of pure silent filmmaking as the cornfield scene in Hitchcock’s North by Northwest, but instead of a deadly crop-duster for a kicker you get a catbus.

I have described some of the things that happen in My Neighbor Totoro. But just as noteworthy are the things that don’t. Mei doesn’t drown. The girls’ mother doesn’t die. Nobody dies, in fact. The girls’ mother doesn’t get better, either. Their father doesn’t realize that he’s misplaced his priorities and accordingly changes his work schedule so that he can be home more, nor is he reacquainted with the true spirit of magic and thus his inner child. (Throughout the film he actively encourages the girls’ to believe in “soot gremlins,” wood spirits, haunted houses, and the like.) Adults aren’t dense and children aren’t brilliant, or vice-versa—both are just muddling along as best that they can. Not a single lesson is learned, and the villains are of the most everyday kind—they are sickness and inattentiveness, nothing more. Totoro and the children do not band together to fight off a wicked Sorceress who wants to imprison the forest creatures. We don’t figure out what Totoro and company want all of those acorns for, in the first place, or why Totoro needs that spinning top scooter when he can evidently fly without it, or who and what else rides on the catbus. What we learn from the absence of these things is how inessential that they are.

Since Miyazaki’s announcement of his retirement, two Studio Ghibli films have been released in the U.S. The first is The Tale of the Princess Kaguya, the latest (last?) film by Isao Takahata, Miyazaki’s mentor and rival from their days together at Toei Animation in the sixties, and the cofounder, with Miyazaki and producer Toshio Suzuki, of Ghibli. The other is The Kingdom of Dreams and Madness, a cross-promotional documentary by Mami Sunada, who was given full access to the Ghibli compound in Koganei—just a bit southeast of Totoro’s setting—over the course of the year preceding the planned releases of Princess Kaguya and The Wind Rises. The movie details day-to-day operations at Ghibli, from mandatory calisthenics to marketing meetings. (Totoro is back as the top-selling calendar.) We spend a great deal of time with Miyazaki, both listening to him unburden himself—he is worried about the Fukushima disaster, about the renascence of right-wing nationalism in Japanese politics—and watching his creative process. He draws storyboards in lieu of writing scripts. Production routinely begins a year in advance of his finishing the storyboards, which effectively means that an unstoppable force is set in motion before its destination has been determined. (“I honestly don’t know what kind of film we’ll end up with,” says Miyazaki.) This may go some ways toward explaining the sense of discovery that marks Miyazaki’s films, not least Totoro—they are films that are created while in the process of discovering themselves.

Miyazaki, as shown in The Kingdom of Dreams and Madness—which, as officially licensed portraiture, is hardly going to be a scathing exposé—leads a strictly regimented life. He works from 11 a.m. to 9 p.m. six days a week, holidays be damned. On Sundays, he volunteers to clean a nearby river. His schedule is heavily determined by such ritual, and he finds this not limiting, but sharpening. (“Within that range,” he says, “I read the world.”) At the end of one day, Sunada follows Miyazaki back to his private atelier where he trots out artifacts, including a photo diary begun with the 2008 financial crisis. “I documented how the Depression manifested itself in my town,” says Miyazaki, but the documentation is, he admits, only “pictures of ordinary days.” Later, by way of restoring the past world of The Wind Rises, he lectures employees on the peculiarities of bowing etiquette in bygone Japan. Here are the little evidences of what makes Miyazaki special—the accrued insight of a lifelong adventure in perception, of a heightened sensitivity to what is happening around him at any given time, a broadly encompassing peripheral vision.

In My Neighbor Totoro’s almost complete abjuration of kiddie movie standbys—the movie was released before the beginning of the Disney “renaissance” that would codify these, signaled by the release of The Little Mermaid, only a year away—we have a small tale, simply told, but resplendent with details in its “pictures of ordinary days.” There is always a sense of ongoing life at the periphery of the events depicted. Butterflies flit about, minding their own business. The tram runs on time. Farmhands work the fields. There are windy nights and rainy days. In addition to such details, Miyazaki retains the memory of children’s invented games marvelously: the way that Satsuki hobble-walks on her knees when the family first arrives at their new home, or that Mei, left to herself, improvises a viewfinder by peering through the rusted-out bottom of an old bucket. His attention to the quotidian has the effect of making the fantastic, when it appears, all the more fantastic, though a great deal of the movie’s charm comes from the element of the quotidian that it includes in the fantastic. A catbus is a marvelous piece of imagination to be sure, but every bit as marvelous is the idea of a forest spirit who actually has to wait for the bus.

My Neighbor Totoro played December 7 as part of See It Big, a series co-programmed by Reverse Shot and Museum of the Moving Image.