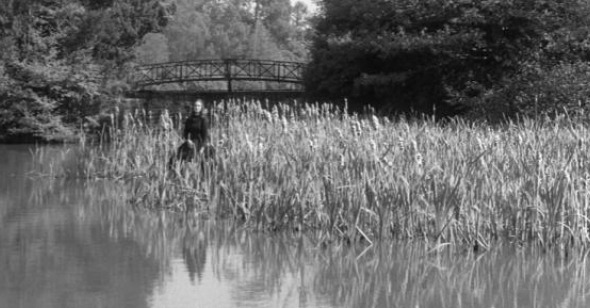 Fear Inside
Michael Koresky on The Innocents

The pedigree of The Innocents is so estimable that it feels like it must have been bronzed upon delivery: Henry James adapted to the screen by Truman Capote (!) starring British Hollywood royalty Deborah Kerr, and directed by an up-and-comer named Jack Clayton, who was already nominated for a best director Oscar for his prior film, his kitchen-sinky Brit new waver feature debut, Room at the Top, for which Simone Signoret won best actress. Yet scary movies have historically never been taken seriously, even when adapted from classic literature (you can count on one hand the number of supernatural horror films that have been nominated for best picture). Horror movies tend to be ghettoized within cinema history, as The Innocents has been; this is the only possible reason so many people have not even heard of it. Yet though it is an undeniably terrifying movie, its virtues would be clear in any filmic category. More than fifty years later, The Innocents remains one of the least compromised, most genuinely unsettling movies of the 1960s, a horror film in both the metaphysical and psychological senses, brought to the screen with more care and craftsmanship than the haunted-house genre probably ever received before or since. Robert Wise’s The Haunting, similarly black-and-white and predicated upon the thin line between possession and madness, stole its thunder two years later, and seemingly for the rest of the century: the latter, a slightly more resolved and narratively accessible trip into the supernatural, shows up regularly on Scariest Movies of All Time lists, while Jack Clayton’s devastating journey into the interior world of the haunted has been greatly forgotten.

What a shame, because anyone who settles in to watch The Innocents, especially in the theater, is in for a big, wide shock: this Cinemascope adaptation of James’s The Turn of the Screw is one of the most exquisitely modulated ghost stories ever shot. To say that The Innocents is the most “classical” of horror films is to refer more to its view on death than its sophisticated source material. Death is here something to be profoundly feared, something that can’t be quantified; the ghostly realm exists not as a concept but as a reality and an end point. Vividly representing that fear is Deborah Kerr’s increasingly wide-eyed Miss Giddens, a pastor’s daughter who takes a job as governess of two young orphans at a remote British estate. Her transition from tremulous truth-seeker to manic madwoman, as she begins to suspect that her young charges, Miles and Flora, are possessed by the spirits of the dead, is so gradual as to be imperceptible, and her invocation of fear is breathtakingly palpable, even as we begin to doubt her sanity. Yet young Pamela Franklin and, especially, the preternatural man-child Martin Stephens (who just one year earlier played one of Village of the Damned’s blond cherubs from hell) are every bit her match; theirs is a secret world—perhaps the world of children, and nothing more—that Miss Giddens begins to greatly distrust, until she tries to violently snap them out of it.

What’s most remarkable about The Innocents isn’t merely Clayton’s tonal and narrative faithfulness to Henry James’s story (it’s practically blindsiding that the film goes for the book’s same grim ending), but that he still manages to make something uniquely, unforgettably cinematic. The Innocents fully harnesses the dramatic—and disturbing—possibilities of the screen’s 2.35:1 aspect ratio in a dynamic array of deep-focus compositions by virtuoso cinematographer Freddie Francis (an Oscar winner for Sons and Lovers and Glory), as well as the best use of the dissolve I can recall in a mainstream movie: often one scene will fade out onto one another, slowly, lingering as though draped over the next like vapor, or a death shroud. There are more grab-your-throat gasps and literal hair-raising moments in this film than even in its soul sister, Alejandro Amenábar’s masterful 2001 homage The Others, which managed to create its own specific world while trading in Clayton’s same hushed, candlelit morbidity.

The Innocents concerns a haunting—faces materialize at nighttime windows, a woman dressed in black appears amongst tall reeds by a rippling pond, shadows and silhouettes seem to dance at the corners of its wide frames—yet it’s not content to just be a ghost story. Even Capote’s Freudian sexual frankness (more acute in his script than in James’s book) snakes its way onto the screen, including and intimations of pedophilia: preadolescent Miles’s supposed possession by the handsome lothario Peter Quint makes for some seriously perverse magnetism between he and his “pretty” governess. The Innocents hasn’t dated a day, mostly thanks to its sophisticated ambiguities. Here, explanations mean nothing, and nobody has answers, just an endless tangle of secrets, hazy motivations, and impenetrable facades. It has the opposite trajectory of most narrative cinema: the more we discover, the more confused and upset we become. Exposition falls away. And as close as we get to Kerr’s unraveling Miss Gidden, the less we know her, until it’s far too late.

The Innocents played November 4 at the Museum of the Moving Image as part of the series See It Big, copresented by Reverse Shot.