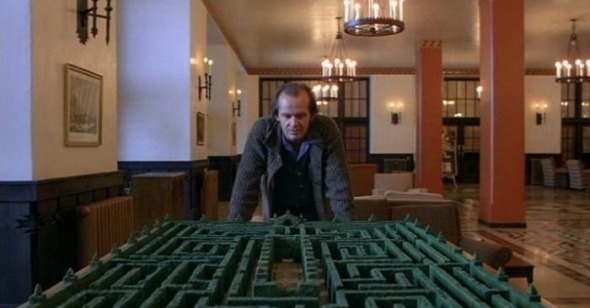 Get Lost
Michael Koresky on The Shining

When Stanley Kubrick announced he was planning on making his first horror movie, people had the right to be afraid. Too often tagged as a cool modernist, the New York–born director (living for many years in England a life that had been somewhat mischaracterized as overly remote and isolated) had in fact been responsible, despite his predilection for clean lines and damning irony, for some of the most heated, visceral images in cinema. Consider Colonel Dax’s impassioned dressing-down of the top brass (after it’s too late to save his men) in Paths of Glory; General Ripper’s dangerous, tobacco-haloed delusional behavior in Dr. Strangelove; HAL’s slow dismemberment in 2001: A Space Odyssey; any of the gut-churning spectatorial discomforts of A Clockwork Orange; the agonizingly protracted duels in Barry Lyndon—take-no-prisoners moments all. A Kubrick film doesn’t just make you feel what you’re watching, it forces you to watch helplessly as the world spins into controlled chaos.

The Shining turned out to be, paradoxically, Kubrick’s most controlled and most chaotic film, an exquisite structure that finally busts apart, as though with an axe. In Stephen King’s pulpy best-seller, the director saw something more than just a tale of a haunting, or a possession, or extrasensory perception, or split personality, or alcoholism, or the dissolution of patriarchy, or the question of what constitutes domestic normalcy—though it concerns all of these things. Kubrick noticed in this story of a family isolated in a Colorado resort hotel during the deserted winter months an immense psychological labyrinth, an epic expression of man’s weakness and his incomprehension in the face of his own mortality. It’s a behemoth of a film, a monster in its own right, which bears down on the viewer, in both image and sound (those openings horns from the fifth movement of Berlioz’s “Symphonie Fantastique,” accompanying vertiginous helicopter images of the Colorado mountains instantly set up something grandly surreal).

Wannabe-writer protagonist Jack Torrance (Jack Nicholson), in cutting himself off from everything except for his wife, Wendy (Shelley Duvall), and child, Danny (Danny Lloyd), and his vague “responsibilities” (an oft-used word in the film) to his seasonal employers, ends up burrowing deep within himself and coming back with little but animal urges and imploding resentment; this gets him trapped not only within the walls of the immense Overlook Hotel itself but also his own self-imposed maze of the mind. It sounds like heady stuff, perhaps; but Kubrick managed to not only create a satisfying genre film around these ideas—he also changed the way we watch and think about horror on screen.

Stephen King has been quite vocal in the past 30 years about his dissatisfaction with Kubrick’s adaptation of his work, to the point of even commissioning and overseeing a made-for-television miniseries in the mid-nineties that would hew closer to the original text. King’s complaint has historically been that Kubrick, brainy and talented though he may be, didn’t seem to know the first thing about creating the sort of tension and release that horror films allegedly require and deserve. His go-to scene as evidence of this is when Wendy enters her husband’s now forbidden office area (for all intents and purposes at this late point in the film a beast’s lair) and discovers that the manuscript he has been working on for weeks (or perhaps months—the film’s timeframe is purposely indeterminate) is just stacks and stacks of pages reading the sentence “All work and no play makes Jack a dull boy.” The words are written as prose, as poems, as paragraphs, as stanzas. The tension builds as Wendy flips desperately through the pages, which Kubrick shoots at an ominously low angle, her fingers grasping at the papers in the extreme foreground; we know Jack will find her, and possibly attack her. Next lies the crux of King’s argument against Kubrick’s brand of horror: rather than create a shock cut of, say, Jack popping out of the shadows to give Wendy and the audience “a good scare,” Kubrick cuts away to a point of view shot that tracks from the side of a pillar to show Wendy from behind, as Jack slowly makes his way into frame, the camera resting a bit over his shoulder. “How d’ya like it?” She squeals and flips around. He creeps closer.

Perhaps this scene does go against what King and presumably many others believe to be, reductively, the rules of horror. But regardless of how one wants a horror film to behave or function, or however one wants it to provide catharsis (for what else is a “good scare”?), it’s clear that Kubrick, in cutting away to monitor Jack’s approach, is after something entirely different; he’s both aligning us with the monster’s perspective, and stretching the tension of the scene out to excruciating lengths. This is not a film of “jumps” (save one horrifying axe murder later in the film), but rather a slow, sad look square in the face of death. Directly following this alleged horror faux pas, Kubrick creates one of the most frightening—and emotionally devastating—scenes of his career, in which Wendy, carrying a baseball bat, is pursued across the length of the cavernous room by Jack, armed with nothing but grasping boogeyman fingers, as he teases, mocks, and threatens her. Not only is this the end of their marriage, it’s also the clearest depiction yet of his madness, bred equally from physical isolation, his own personal demons, and the ghosts that possibly haunt this godforsaken place.

Kubrick’s deliberation here is also borne out in his actors. It’s here that Nicholson breaks loose and Duvall nearly crumples. Kubrick allegedly took over a hundred takes of this scene, sending the actress into a form of derangement. The technique worked, as the scene is predicated as much on her pathetic exhaustion as it is on the dissolution of his reason. Kubrick’s methods here show a director intent on immersing his audience in the emotional fabric of his film, not just the cerebral image-maker many have claimed. The Shining is, in fact, pure emotion, whether that emotion is fear or awe, or both simultaneously. Perhaps its most frighteningly awesome image is the one that literalizes Jack’s inability to navigate his environment or intellect: a gigantic hedge maze in back of the hotel (altered from the novel’s sillier topiary animals, another point of contention for King). Though man-made, the maze seems almost cosmically created, a place entirely of the mind that swallows up those who venture in. Kubrick’s central metaphor, it’s really just a variant of the Overlook Hotel itself, whose winding corridors and inscrutable design seem to exist only to get lost in.

Even little Danny, cursed with an ESP that the hotel’s kindly and similarly afflicted cook, Hallorann (Scatman Crothers), calls “the shining,” never seems to know what’s around each corner. In fact, though many of the film’s most famous single horror images emanate from Danny’s subconscious only to later be actualized (an elevator spewing forth geysers of blood, the ghosts of two little murdered girls beckoning from the dead end of a hallway, the word “murder” scrawled in lipstick backwards on a wooden door), the boy’s supernatural abilities are unable to give any coherent structure to this film’s terrifyingly ambiguous world. All we can do is feel dwarfed by it, as the characters are.

And to properly experience how Kubrick lets us loose inside this intimidating maze of a film, it must be seen on a big screen. The film functions brilliantly well on television (the only way many of us have seen it), being at heart a claustrophobic study of a stifling family space. But the uncanny eeriness of Kubrick’s mammoth production—which, save its opening and closing sequences, is mostly interiors—casts a particular spell in the theater, where the viewer is swallowed up along with the characters into darkness, and in which Kubrick’s famous Steadicam shots deliver us inexorably toward things we might not want to see. For much of the fear in The Shining is in its sure and steady forward motion, its desire to get us caught up in its gears, frightened and helpless. It bears down on us, offers us no release. What is horror if not a sort of entombment?

The Shining played on October 28, 2011, at the
Museum of the Moving Image as part of the series See It Big, co-presented by Reverse Shot.