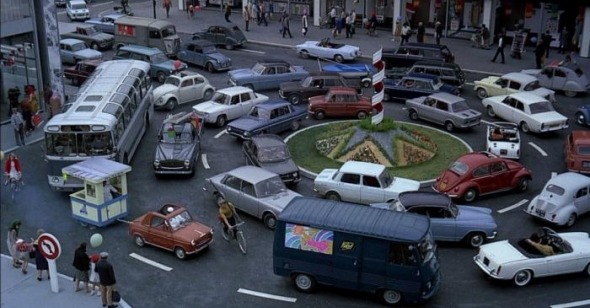 Welcome to the Big City
Julien Allen on Play Time

The first clue is in the title. Not in its meaning exactly, but in the fact that when Jacques Tati’s 1967 cri de coeur, three painful years in the making, was finally released in French cinemas, the title was in English. Gasp!

What was already clear to those who knew and worked with Tati was that by the early 1960s he was royally fed up—with being the “French Chaplin,” with being the filmmaker whose films (as Godard so cruelly put it) were watched by people who “didn’t really go to the cinema.” And most of all, he was starting to tire of his alter ego, Monsieur Hulot, whose popularity threatened to asphyxiate Tati’s career. A decade earlier, Mon oncle had introduced the concept of “Hulot versus mechanization” on a micro-level (Hulot visits his brother-in-law’s home and factory), but Tati wanted, and felt he had earned the right to, a wider canvas—so he built one, across a five-acre patch of wasteland outside Paris. There he shot Play Time.

“I could have carried on doing the same thing, there was no financial risk, it would have worked: the postman [from Jour de fête] gets married; the postman robs a bank or gets conscripted or whatever—like churning out canned food. In the end I made four films I wanted to make and my story ends there,” Tati would solemnly reflect years later when the fallout had started to ease off. For if Play Time was Tati’s Modern Times, it was also, regrettably, his Heaven’s Gate: the most expensive film ever made in France, it baffled audiences and flopped, despite always enjoying critical success and attaining masterpiece status years later when its manifold predictions about the dysfunctional relationship between man and modernity (cubicle-based working, wastefully vast reception space in modern office buildings) had started to come to pass. The film’s commercial failure contributed to Tati’s decline into bankruptcy and the great artist’s cliché of a penniless death.

Paradoxically, Tati’s newly expressed ambition was characterized both by a desire to break out of his own comfort zone, making use of up-to-date movie presentation technology (70mm film, stereophonic sound, Eastmancolor), and at the same time by a form of plaintive conservatism, deeply ingrained in the film’s subject matter. Play Time feels as if Tati has placed the France his own cinema represented into the France of the future and watched it struggle to survive, just as the forlorn Hulot gets lost amongst the steel and glass and occasionally fades from view. The title was a dig at the modish sixties’ use of meaningless Anglo-Saxon expressions to sell products, ideas, and a way of life—the Americanization of France, which Play Time accurately predicted, sometimes in quite stunning detail. Tati would live to see the skyscrapers of La Défense go up a decade or so later (he joked that he could have waited for that to happen rather than spend all that money on sets), but he died in 1982, mercifully for him before he could overhear French children screaming “Bonjour Mickey! Bonjour Minnie!” in the fake streets of Disneyland Paris.

The architecture of Play Time itself (nicknamed “Tativille”) is a grandiose vision, born of Tati’s fastidiousness, with sets and stages that echo the scale of D. W. Griffith’s Intolerance. Entire buildings (flats, offices, an airport terminal) were erected and roads were laid out; the outer boundaries of the set were covered with vast photographs to give the illusion of location when the camera was pointing outward. The cars, uniforms, and plainclothes of the characters that populate Play Time by day all share a homogenous blue-grey quality which, whilst far from drab, engenders a stifling atmosphere familiar in futuristic films, which implies that the masses are being controlled—in this case by an obsessive desire for “progress” and a belief that their lives are being made easier, when most of the comedy springs from precisely the opposite being the case.

Tati never started from a narrative base—he let the incidents and events tell their own stories—so the film consists of six separate sequences (the airport, the office block, the trade fair, the apartments, the royal garden, and the traffic circle), wherein we follow a hapless group of American tourists (who had hoped to see the “real” Paris), and M. Hulot—or rather numerous M. Hulots, as Tati teases his audience with impostors, poking fun at their appetite for Hulot above all else. Each scene consists of pure mise en scène, meticulously choreographed down to the last detail, depicting the movement of bodies: some certain of their paths, walking in straight lines and right angles around the contours of the space, some who have short-circuited this process as they begin to take control of themselves and the majority, seemingly baffled and lost within this vast modernist gridlock. Whereas Tati had always used humor to create character, here he slowly builds through visual and aural gags (sound was a key component of his “silent” comedy) a rich comedic landscape laced with equal quantities of cynicism and warmth. A film of moments, certainly, from which viewers will pick their favourites (the 360° cubicle floor, the absent glass door to the restaurant, the cleaning of the hinged window, the carousel of cars), which combine to create a stark and forbidding world at first, but one which Tati suffuses with subtle expressions of more traditional beauty—as if painting curves over the lines. The dynamics of Play Time are such that organic beauty will eventually find its place amongst the more oppressive, controlling aesthetics of modernity.

The reason the film doesn’t work as a satire on modern architecture is because it isn’t one. Tati may have mistrusted society’s misguided attraction to relentless progress and its inability to properly inhabit it, but he wasn’t in the business of critiquing the aesthetics. On the contrary, much of the landscape of Play Time has a disarming glamour, harnessed by the director to create frame-filling frescoes, striking layered glass effects, and some of the most vivid deep-focus photography in cinema (one particular shot of a figure appearing at the end of a long corridor was lifted wholesale by David Fincher for John Doe’s first appearance in Seven). Far from a misguided folly, Tati’s outsize vision would provide the means with which he would surpass himself as a director.

Tati’s humor is unique and not to all tastes—jokes are built up slowly, repeated, and often left unfinished (witness the constant seasoning of the fish in the restaurant, a joke for which a punch line was filmed but never used). He deconstructs silent comedy in such a way as to provoke not just laughter, but cerebral ripples of recognition, fond admiration, and occasionally, sadness (a quality to Tati’s life and work that burned through Sylvain Chomet’s sensitive animated Tati adaptation, The Illusionist). For Tati’s act, out of time, really did reflect his life—by 1967 his cinema, though uncategorizable, was quaint if not downright reactionary when compared with the New Wave. During the time it took him to make Play Time, Godard shot Pierrot le fou and Alphaville, and Bresson made Au hasard Balthazar. Tati’s grand designs seemed to go the way of the great modernist architect Le Corbusier, whose new town in Firminy in the Loire region of France you can still visit today—with flats, offices, a church, and a running track. It lies dormant and uninhabited—a relic of modernity.

Those fans of Tati who opposed the film said that his use of 70mm was pretentious. His response, practical and unpretentious to the last, was that with Super 8 he could show a window; with 16mm, four windows; with 35mm, twelve . . . but with 70mm he could show the façade of Orly. Nevertheless, it is true that Play Time wasn’t made for the screen, but for the eye. When the camera stops, the eye wanders to all parts of the frame, to spot the minutest details, as one would study a Brueghel street scene. All Tati really wanted to do was to stick up for the little man with a screwdriver who turned up when one of these impenetrable machines went wrong, because he believed that people need people much more than they need shiny new buildings. This is the best reason to see Play Time on a big screen—to better glimpse the humanity between the lines.

Play Time showed November 4 and 5 at the Museum of the Moving Image as part of the series See It Big, co-presented by Reverse Shot.