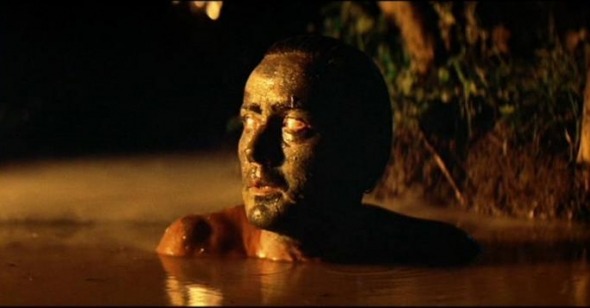 The famed first sequence of Apocalypse Now not only lays the hallucinatory groundwork for the rest of the film, but it also foregrounds the very scale of the destruction wrought during the Vietnam war: To the frayed preliminary strains of the Doors’ “The End,” helicopters swarm in slow motion over an anonymous patch of jungle, a bright-yellow plume of smoke dancing eerily in the chopper blades’ current; suddenly, an inferno, unleashed from above, engulfs the landscape, and the camera—which has heretofore been completely fixed—begins tracking to the right, effectively measuring the detonation’s impact as it moves along. A series of dissolves then positions this less as an actual event than one officer’s fevered encapsulation of the conflict he can’t seem to tear himself away from: A man appears, his face upside down, superimposed over the blaze, as he takes a slow drag on a cigarette, evidently hypnotized by the helicopter whirr of the ceiling fan above. Later in the same Saigon-hotel-room sequence, that man, special-operations officer Benjamin Willard (Martin Sheen), shatters a full-length mirror with his fist, suggesting the impossibility of assimilating the war’s grand-scale horrors has led directly to this downward spiral of self-destruction.

Rightfully regarded as one of the finest films on the subject of war ever made, Francis Ford Coppola’s Apocalypse Now nonetheless also happens to be one of the most perennially elusive and disconcerting consensus classics of the American cinema. Discussion of the movie’s actual action has long seemed almost beside the point. There is the enduring Hollywood legend of the hellish production in the Philippines, the movie’s status as one of the money-hemorrhaging swan songs of a marvelously unruly era of domestic feature filmmaking, and the long list of homages and parodies it has inspired. Perhaps this is in part because the film itself is so difficult to pin down. It has a clear, linear narrative direction (Coppola and screenwriter John Milius, loosely adapting Joseph Conrad’s Heart of Darkness, use a simple journey’s-progress template), but an altogether more unsettled relationship to its sometimes top-heavy themes (the rottenness of the Vietnam war, the rottenness of war in general, the fragility of the human psyche, the meaning of civilization, etc.). Grasping the film as a whole is even more difficult in its 2001 (Coppola-preferred) Redux cut, a more languidly fluid affair. For one thing, women feature much more prominently: In this 50-minute-longer version, members of Willard’s crew canoodle with a pair of Playboy bunnies after their USO show, and Willard goes to bed with a French woman at the ghostly rubber plantation where she’s holding out.

A strong common thread may be found, though, throughout many of the film’s most arresting scenes, including that iconic bad-trip opener: the nauseatingly theatrical dimension of war—a key reason why this movie in particular, shot by the great Vittorio Storaro, stands to gain from an expansive theatrical presentation. Vietnam appears here as a crucible of chaos, a place occupied by a corps of distorted personalities, where only the most flamboyantly brutal gestures seem to register through the candy-colored napalm haze. Once Willard receives his orders to go upriver to kill Colonel Walter E. Kurtz (Marlon Brando)—a decorated American officer who has gone rogue in a highly extravagant and “irregular” manner, amassing an army of followers deep in the jungle, over the Cambodian border—the nightmare commences in earnest. A patrol boat—whose motley crew also includes fired-up Clean (Laurence Fishburne), spaced-out pro surfer Lance (Sam Bottoms), tightly wound Chef (Frederic Forrest), and the older Chief (Albert Hall), stoically manning the helm—provides the means of transport.

Each scene unfolds as though it were a stop-off at some dystopic movie already in progress, but one in which real human atrocity can periodically pierce the rest of the charade. Perhaps most notable is the early rendezvous with Lieutenant Colonel Bill Kilgore (Robert Duvall), a barrel-chested cock-of-the-walk commander who seems to relish the chaos around him, and who leads the formation of helicopters during the spectacular “Flight of the Valkyries” air strike, a barrage that’s presented, sickeningly, like a commemorative fireworks display. In voiceover (journalist Michael Herr penned the narration), Willard observes that Kilgore will always emerge from battle unscathed: “He was just one of those guys with that weird light around him. He just knew he wasn’t going to get so much as a scratch here.” From one stage to another: Soon after the Kilgore episode, Willard and his men pull over for fuel and find themselves taking in a USO show featuring a trio of Playboy bunnies (one of the women is dressed as a cowboy, another as an Indian), though the extended tease ends abruptly when a riot breaks out at the waterfront amphitheater. In Coppola’s film, there comes to seem something uniquely American about this kind of garish display.

A gradual redirecting of the thematic spotlight occurs not long after the USO scene. Much of Apocalypse Now’s haunting overall effect stems from the fact that, as the journey upriver progresses, the film’s focus seems to dilate, rather than constrict, moving further away from a Vietnam-specific commentary to a more dispersed meditation on the since-time-immemorial impulses at the dark heart of mankind. This diffusion of themes occurs organically, so that the acid take on America’s aimless conduct in Vietnam doesn’t feel abandoned so much as transmuted. But after the sampan massacre—the film’s closest-range atrocity, during which the skittish Clean opens fire on a vaguely suspect family of Vietnamese farmers—the theater of violence continues on a stage whose dimensions are more difficult to make out than the contours of the battlefield.

A kind of slow-stroboscope psychedelia takes over at the Do Lung Bridge, where faces fall in and out of the darkness as fizzling flares and seemingly undirected bursts of mortar fire sporadically illuminate the night sky—a surreal light show that serves as a prelude to Willard and Co.’s arrival at Kurtz’s compound. When Willard’s journey does finally reach its terminus, the impression of an acrid performance remains in the atmosphere. Kurtz himself turns out to be a consummate showman in his own respect, reading aloud prophetically from Eliot and brooding in the shadows, his every movement suggesting that he’s fully, if somewhat wearily, aware of each shaft of light as a potential dramatic device. (This sense is probably at least partially due to a storied on-set workaround, since the actor showed up to the set unprepared and overweight.) Referring to the severed heads littering the encampment, “poet-warrior” Kurtz’s most forthcoming disciple, an American photojournalist manically played by Dennis Hopper, admits that his idol can be a little over-the-top: “Sometimes he goes too far, you know, and he’s the first one to admit it.”

As the film drifts onward, it feels less and less likely that Kurtz has been imagined by Coppola and Milius as the embodiment of a single coherent ideological position. The tweaked-out ravings of the photographer, for one, seem to destabilize what the colonel stands for, as does one Kurtz rant about morality and judgment. The colonel is gradually boiled down to his charismatic essence—a regime of seductive phrases and loaded little gestures, all of them aimed at rejecting any authority but his own. From here, Apocalypse Now moves inexorably toward a climactic showdown, but the film’s conclusion, rather chillingly, lacks a sense of resolution. If we could follow Willard beyond that final dissolve, we would no doubt find him haunted by even more imponderably strange and horrific images of combat than at the film’s outset—and unsettled even more deeply by the specters of the larger-than-life men who were able to harness the appalling spectacle.

Apocalypse Now Redux played July 13, 14, and 15 as part of at Reverse Shot's See It Big series at Museum of the Moving Image.