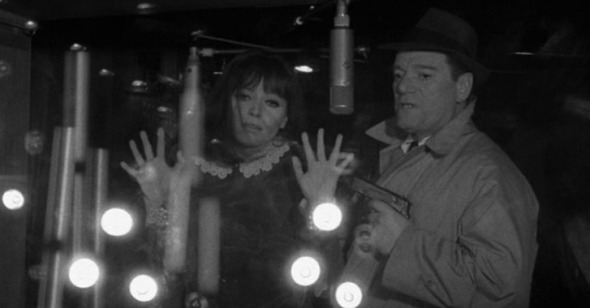 One: a smart suit and a jaunty hat; a poker face and a smoking gun; deep shadows and a brassy, minor-chord score. Two: a menacing, artificial light and angular glassed buildings shot from low, jaunted angles; an otherworldy voice and strange syntax. As if dared to articulate genre in the fewest shots and with the fewest possible tropes, Godard casually establishes in a matter of seconds that Alphaville is both a work of noir and of science fiction (as if conjoining the two was the most natural thing in the world). Transposing popular B-movie actor Eddie Constantine along with his signature detective Lemmy Caution to a vaguely futuristic scenario, he then proceeds to drag and pull and tease both genres any which way his designs dictate. Even as story meanders and stops and is half-heartedly kicked forward, the persistent gestures to genre keeps things legible, somewhat familiar, even dramatic. A savvy, if masterfully economical recruitment of form as receptacle for philosophical inquiry, Godard nevertheless refined a lexicon for subsequent big-budgeted, high-concept offspring (Soylent Green, Blade Runner, The Matrix, 2001: A Space Odyssey). It’s only fitting then that in its offhanded, thrift-store approach Alphaville is still cooler, stranger, and more prescient than them all.

Not only is the film lacking in special effects and futuristic sets—analog machines stand in for computers and selected mod-Parisian locations suggest an alternate (though cleverly contemporary) reality—but the visual strategy eschews exaggeration and space-suggesting cross-cuts. In long, handheld takes, Raoul Coutard’s camera explores every corner of interior space: into a building, through the lobby, up the elevator, down and around the hall, and finally squaring four close walls of a hotel room. Nothing’s not shown, nothing’s not real. Dramatic content—characterization, dialogue, gesture—makes metaphors that transcend the tactile space, but the mise-en-scène borders on documentary: sci-fi convincingly (not to mention cheaply) shot as cinema verité.

The presence here of Lemmy Caution and his anachronistic tough-guy demeanor evokes a certain nostalgia inherent to noir, but Caution isn’t technologically averse or totally resistant to change (he’s as easily intrigued and seduced as the next fellow). He’s simply an excellent judge and flawed representative of what is and is not human. Logically speaking, the world doesn’t need Lemmy, or any character for that matter. Except, of course, that it does. For whenever what’s inessential is forgotten or prohibited, as is the case in compulsorily rational Alphaville, what triggers and colors life is lost. A lone-wolf crusader for the sake of all that’s illogic—love, violence, impulsiveness, poetry, memory—Lemmy perfectly embodies Godard’s moral thrust and Alphaville’s enduring potency. Never simply old school or trailblazer, retro or progressive, just or unjust, good or bad, Lemmy is defiantly, consciously, irrationally, everything at once. —Eric Hynes

So, we arrive at Contempt, the oft-revived, oft-praised pinnacle of the first portion of Godard’s 60s, some might argue of his entire career. Even when placed amidst his more aesthetically unified earlier works, Contempt still stands out for presenting itself as a clean (icily so) conceptual and aesthetic whole. It lands even further from the open confrontation that would mark his cosmic films from the latter half of the decade. Contempt’s sublimation of the formal disjunctures that so confidently powered and derailed his other films into its seductive scope frames only renders it more successful, more radical—here, for once, Godard took a/the movie apart from the inside out, as he went along. It’s somewhat odd to show Contempt near the end of the series—a strictly chronological trek through the decade finds his films growing more scattered, more provoking, more discursive, more like a new kind of movie that no one had seen or imagined before. For those who find La Chinoise an unbearable slog, Weekend an affront to viewing, or Le Gai Savoir art cinema’s worst nightmare, who only sees the Godard of this decade as a precocious provocateur in a dark suit with glasses should spend time with Contempt. It’s merely one of the most perfect, tragically romantic movies ever made.

The plot should, by now, be familiar to those with even a passing familiarly with Jean-Luc Godard: Michel Piccoli’s Paul, a struggling writer weighing whether or not to take a stab at salvaging a filmic adaptation of The Odyssey (Godard going right to the source in his typically tangled allusive web here), directed by Fritz Lang, and produced by comically chinned proto-super-producer Jeremy played by Jack Palance. Brigitte Bardot’s Camille, Piccoli’s luscious wife, and the film takes a brief, simple encounter in which Paul invites Camille to share a ride down the cliffs of Capri with Jeremy as the point of departure for his tracing of the gradual disillusionment and disentanglement of their relationship.

Contempt rests on a series of misunderstandings—mostly of man misunderstanding woman and reaping his just rewards. Paul’s inability to comprehend Camille’s growing malaise stokes the titular emotion, pushing him further towards a place of less comprehension, leading to her further suspicion of his love and around again. At least so it seems—by the end of the film Paul acknowledges his awareness that Camille’s frustration stems from that moment in which she felt transformed by the dynamic between two negotiating men into an object of exchange, but by that point the admission is too late, and even worse for its lateness. It’s the most perfect evocation of internal marital decay on film: two people, together in one moment, in the next unbound from each other completely, unexpectedly.

Scorsese’s on record as labeling Contempt as one of the best movies about moviemaking going, and it is that. But though the film’s very first shot turns the/a camera literally on the audience, what’s really at stake here is not movies, but romantic love. Or, more specifically: the idea of romantic love as it has been mediated by the complicity between audiences and the motion picture industry. Ever despairing, ever hopeful, Godard observes the breakdown of his couple clinically, with scope frames growing emptily claustrophobic and Georges Delerue’s overpowering score (truly the saddest music in the world) keying up the emotions. He wonders about mediation: isn’t that the havoc movie romance has wrought on the public at large? That filmic narrative’s vision of romance and romantic love is so far removed from the ongoing tussle that is a real-world relationship that it indoctrinates all the world’s potential lovers into an illusory system? Everyone wants to love like they do in the movies, but few can or will. Even fewer acknowledge the richness that would be lost if they did.

If much of Godard’s sixties found the director playing with genre in his own highly idiosyncratic way (reductively: Alphaville-sci-fi; A Woman Is a Woman-musical; Les Carabiniers-war film; Breathless-gangster flick; etc.), then, Contempt is his grand melodramatic romance. Fassbinder stole the overall concept and mucked it up with his own trash sensibility for the far more hilarious and equally successful in its own right Beware of a Holy Whore. But Holy Whore’s “romance(s)” such as it was, was truly secondary to the nitty gritty: waking lists, completion funds, phone calls to Stuttgart from busted Spanish pay phones. Godard the lover and covert optimist emerges bruised, battered, yet oddly whole from the finale of Contempt. Even though his dire ending caps a film which suggests the difficulties and potential consequences of entering into union with another, he wouldn’t have made it in this largely accessible, highly inviting fashion if he wasn’t making among his most important cautionary statements: be careful all, for it’s easy to lose it at the movies. —Jeff Reichert 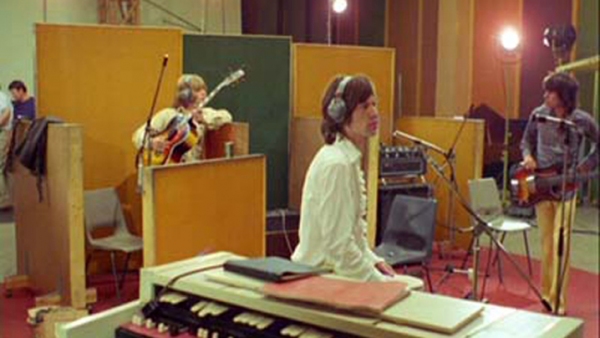 Sympathy for the Devil

One helluva cock-tease, Godard’s dance with the pop cultural zeitgeist famously failed to deliver a completed version of the title track (corrected by an unapproved end scene overlay), dedicating as much screen time to oddball agitprop dioramas as it does to Mick and Keith. Godard’s preferred title, One Plus One, more honestly reflects the provocative equivalency of his project, and anyone actually paying attention to what he’d been doing up to and during the period can’t have expected a sober, unproblematized documentary recording. Furthermore, this was 1968, and there was simply too much going on outside to spend an entire film stuck inside a recording studio.

The dramatic tableaux that interrupt the studio documentation are similar in their cheeky audacity to set pieces from Weekend and La Chinoise, and establish a decidedly un-Stones-like (but very Godardian) atonality. But though this back and forth between the Stones and various anarchic skits has its appeal (as does the film’s top-quality color-stock sugar high), it is Godard’s subtle deconstruction of the supposed straight-up side of the equation that truly resonates. For though the camera is in studio and recording as the song comes together, it’s not necessarily trained on the Stones.

Cluttered with equipment for both music and film recording and artificially catacombed by rolling dividers, the studio would seem an unlikely space for a tracking shot. Yet that shooting strategy, dominant throughout the film as it unites interior and exterior, documentary and fiction, process and provocation, effectively democratizes a space primed for star-making and gazing. In the early going, the Stones seem just as primed, with Mick Jagger mugging for the fly-on-the-wall camera like a wannabe Belmondo, and Keith Richards shambling with a bit more shoulder-shruggery. But at the most photogenic moment of the sessions, with the whole band and assorted gal pals gathered round the mike for song-long background vocals, the camera tracks around the perimeter of the room, toward the singers and then away, passing behind dividers and dwelling on technicians, crew, and workmen whose matter-of-fact disengagement contrasts sharply from the dandily dressed rock stars shouting falsetto woo-woos across the room. Privy now to both sides, and with each come upon so even-handedly, it’s suddenly absurd to see one without considering the other, to not anticipate something more beyond the moving frame. No matter the subject or the star, the camera (and by extension we) privileges whatever it sees and seeks. —EH