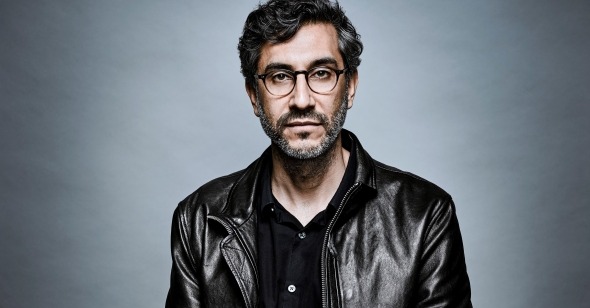 Shoot First:
An Interview with Ramin Bahrani
By Chris Shields

2nd Chance is Ramin Bahrani’s first feature-length documentary. The director’s incisive works of narrative fiction, such as Chop Shop (2007), 99 Homes (2014), and The White Tiger (2021), which was nominated for an Academy Award for best adapted screenplay, have focused on a particular strain of American values at their most brutally competitive and morally corrosive. 2nd Chance presents another story from the annals of this capitalist pathology, but this time, what we see is almost too wild to be true. Entrepreneur and inventor Richard Davis has had the distinction of shooting himself more than 100 times.

Why would anyone but Johnny Knoxville or Chris Burden do such a thing? Davis, the inventor of the modern bulletproof vest, tested his creation on himself time and again, filming these tests in order to market his product to police departments across the U.S. From this geek-show approach to marketing Davis created an empire and an attendant culture that included B-grade action films (directed by Davis himself), a magazine chronicling the lives saved by his invention, and a hubristic cult of personality that would arguably contribute to his eventual downfall.

2nd Chance traces Davis’s beginnings as a pizza-shop owner to the invention of the “2nd Chance” vest, and through the controversies and crimes that would plague the inventor and his product. Interviews with the oddly charismatic Davis are interwoven with archival footage and interviews with the people close to him, including the friend and whistleblower, a former police officer who was saved by a 2nd Chance vest, Aaron Westrick, who would eventually expose him, to create an at times humorous but more often stark vision of “justice” and redemption in America. Bahrani spoke with Reverse Shot about his latest film, the affinities between his approach to documentary and narrative fiction, and what it’s like when your subject isn’t quite what you expect.

Reverse Shot: You’ve made a number of narrative fiction films. What compelled you to make your first feature-length documentary?

Ramin Bahrani: When the producers approached me with the subject, they asked me to make a fiction film. They were looking for a director. When I saw the wealth of archives, I said this is a documentary. I know there's a fiction film there as well, and I think, like, Nic Cage as Richard Davis would be pretty awesome. I wanted to do it as a doc though. I had made two short docs prior to this, and I had been wanting to make a feature doc for a while. I think, in general, documentary's been hovering around a lot of my films for a long time. Most of them came out of a lot of research, spending a lot of time with real people and real locations, and often casting the real people as variations of themselves to be in the films. And I've always thought if I had a camera with me while researching, I don't know, Chop Shop or 99 Homes, it would've been a documentary.

RS: Yeah, I was thinking about 99 Homes specifically because it’s a film grounded in a real and specific place, Orlando, Florida. Michael Shannon and Andrew Garfield feel like characters inserted into this documentary situation.

RB: And there are real people all throughout the film as well. The sheriff who evicts Andrew is a real sheriff who goes to evictions; the clean-out crew that throws their stuff to the curb—that's what they do. There's one actor, the rest are real. Many of the doors Andrew would knock on were housed by the people who lived in those houses. And I would work with them to be ready to do the scene. And then I wouldn't even tell Andrew what the scenes were gonna be about. He wouldn't know what was going to happen when he would knock on the door, he wouldn't know who was gonna open it and what their story was gonna be. He was just armed with the kind of sales pitch or the kind of dialogues that a real estate person would say. If they say this, you say that. And he'd just have to deal with whatever came at him.

RS: When you learned about Richard Davis, was it immediately evident how he’s like one of your characters? He is a sort of living metaphor for a certain dimension of America.

RB: Yeah, I thought this fits my interests. Rags-to-riches stories, with characters that are scrappy and inventive, and often the only way they can get ahead in life is to potentially make a morally difficult decision. I think Richard took it to places I hadn't explored before in 99 Homes. Mike Shannon is pretty straightforward about what he thinks he is. [He’s like:] “My dad was destroyed by a rigged system of winners and losers, and I will understand the game and I will play that game.” Winners and losers, that's how he talked. Now, with Richard, there's such a huge amount of cognitive dissonance there. He doesn't seem to recognize what he's done or want to accept that he's done anything wrong. I think the fictional movies he makes are more real than anything else to him. So there doesn't seem to be any way to penetrate this fear of his own mythmaking, his own self-deception.

RS: Another similarity that resonated with me between Richard Davis and Michael Shannon’s Rick Carver character is that they’re both charming and oddly likable.

RB: Yeah, I liked Richard. I admire what he created. It takes a lot of ingenuity and courage to then shoot yourself to prove your own device works. And he saved thousands of people. That is a huge thing. But he did things we have to question, and he has belief systems about execution-style justice that I don't agree with at all. I find it repugnant, but I kind of liked him too. He is charming. He always had food ready for us when we arrived. He had that kind of folksy charm. I think it's real. I don't think it was just an act, although I think he pushed it up in the moviemaking. He's playing a character; that’s okay. But then he crosses the line, often, and that's maybe not as “okay.”

RS: How far into the process did you become aware of Aaron Westrick?

RB: We knew about Aaron from the beginning. He was in the first round of interviews. We knew he was gonna be a major force in the film. Because they were friends and then he was the whistleblower. He was so intertwined with Richard's story. Who I didn't know about was Cliff Washington. When Aaron started telling us more about him, we didn't know all of that. As soon as we did that interview with Aaron, I drove home with the producers back to the hotel and I was like, “you gotta find Clifford,” and I hope to God he is smart and deep and rich. And he was all those things. And he had a sense of humor. He ended up being an amazing late guest to the dinner party who provided such a stark contrast to Richard's philosophies. He was so much about empathy and restorative justice and about healing when Richard was really just about killing.

RS: It’s very nicely rendered in the film, the two visions of conflict in America: restorative justice, and this kind of Dirty Harry, “wild west” thing. I was intrigued and excited when Clifford appeared and he and Aaron meet up after so many years. It creates a shift that takes the film from the past into the present.

RB: In fact, some of that came in structurally from The White Tiger, because I started noticing the reaction people had in the middle of the movie. Something very startling happens that moves people into a different place, and then again towards the end. And I was just thinking that with Clifford coming in when he does, he takes the movie into a different emotional and philosophical space.

RS: Being your first feature documentary, how much were you thinking, if at all, about form before you began?

RB: There were moments where we asked what would happen if we brought an actor in to play Richard Davis, and what would that do? And should there be recreations? And if so, would Richard film them himself because he was a director? We thought a lot about that. And in the end, I didn't go in that direction. But I've recently rewatched one of my favorite films, Close-Up, in preparation for another project where I might use some of those techniques. And another Iranian film, Mohsen Makhmalbaf’s A Moment of Innocence.

RS: One of my favorite films, and I can see echoes of that in 2nd Chance, the collapsing of past and present, and doing that in a way where the point of intersection is the film itself.

RB: Also, Joshua Oppenheimer. [His film the The Act of Killing] inspired the idea that I would ask these characters to look at a laptop with recreations that Richard had filmed or listen to Aaron’s wire recordings of him and Richard, ask them to listen and watch, and capture their reactions and emotions.

RS: When you began speaking to Richard and everyone else that you interviewed, how much did your understanding of the story and the situation change?

RB: As a filmmaker, documentary or fiction, when I'm walking around researching a fiction film, you're waiting for people to say these things to you. I walk around with my yellow legal pad. The people I'm meeting, they say things that make your understanding of your subject so much richer. I think the biggest thing for me here was that Richard wasn't what I expected at all. And I remember the first two days back in the hotel at night, I was like, oh my God, what is the movie going to be then? If he's not willing to reveal himself to me? Why did I agree to make this film? But I learned, no, actually that is who he is. And to just dig deeper into what he's giving me, even if he doesn't want to go deep into his soul, that's who he is. So that becomes part of the theme. That becomes part of the self-deception that becomes part of the mythmaking, that becomes part of the delusion, part of the cognitive dissonance. And then I found a cast of characters around him to support, contradict, challenge, or be in contrast to that.

RS: What do you think happens to Richard after this?

RB: I don't know. There was a scene we filmed that we didn’t use with him and his family at dinner, meaning his son, his first ex-wife, grandkids. And in my mind, I'd love to see him more there because he has a great family who really cares about him. And as I said, despite things he's done that I think are wrong, and that I don't agree with his philosophies, I don't know who I am to judge. I hope he’ll be with his family and be happy somehow. 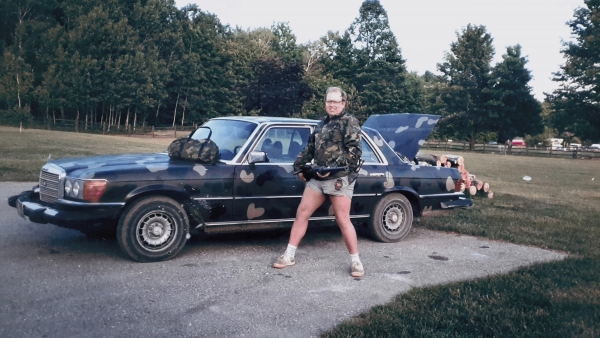