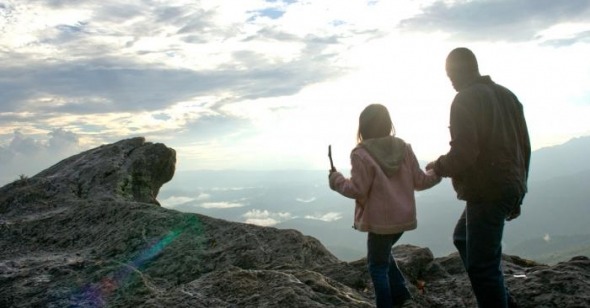 On the Edge
by Jeff Reichert

Over the course of his three features Ramin Bahrani‚Äôs accomplished what fewer and fewer American filmmakers have been able to over the past funding-starved decade. Against all the odds facing the indigenous filmmaker, he‚Äôs carved out a recognizable worldview and sets of concerns, populated his work with indelible, rounded characters, and worked his way through an emerging individual aesthetic. Having seen Man Push Cart and the superlative Chop Shop, I expected of Goodbye Solo a familiarly warm humanism built from credible performances given by (generally) non-actors, an unfussy naturalism (neo-neorealism as some have dubbed it), and a window into lives lived in plain view, but completely out of sight. It didn‚Äôt disappoint.

So add Solo (Souleymane Sy Savane), an irrepressible Senegalese taxi driver working the streets of Winston-Salem, North Carolina, to the roster of Bahrani‚Äôs fascinating characters, which already include a South Asian pushcart operator with aspirations and a spunky Latino junkyard brother-sister duo. We meet him as he‚Äôs mid-trip with his latest fare, William (veteran character actor and Elvis consigliere, Red West), an older man who, before the film‚Äôs even begun, has asked Solo to enter into an odd pact: in two weeks to the day, pick him up, drive him to a state park two hours away and famous for its treacherously windy mountaintops, and leave him there in exchange for an extremely generous fee.

It doesn‚Äôt take much beyond the weariness in William‚Äôs eyes and voice for Solo to deduce that the man‚Äôs aims are suicidal, and the rest of the film follows the taxi driver‚Äôs efforts to insert himself into William‚Äôs life and pull him back from the edge. By Goodbye Solo‚Äòs midpoint, the odd pair are sharing a hotel room (Solo‚Äôs been left homeless after hiding his hopes of a career as a flight attendant from his very pregnant wife) and cruising around town getting to know each other in advance of the fateful day. It‚Äôs a road movie largely set in one town, and you‚Äôll find the usual arc‚Äîan introduction, the acclimation, the few moments of uncomfortable truth piercing through the silences, a fight, a split, and reunion‚Äîrendered with care by Bahrani, who‚Äôs shown little interest across his films in doing backbends for the sake of novelty.

As Goodbye Solo chugs along, we also get the requisite parceling of background information, a nicely multiculti cast of supporting players (especially Diana Franco Galindo as Solo‚Äôs stepdaughter Alex), and a few odd detours and interactions that leaven Solo‚Äôs trademark optimism. It‚Äôs a pleasant, well-balanced ride throughout, even if Bahrani hurts Goodbye Solo somewhat by opening too quickly; we‚Äôre thrown so immediately into the narrative (literally mid-conversation) that the gravity of William‚Äôs death wish is less something deeply felt than inferred and goosed along by the necessities of narrative. Still, it‚Äôs an admirable gambit, one that makes me further respect him as a filmmaker even as I find his film somewhat less successful as a result.

In truth, Goodbye Solo doesn‚Äôt fall too far from the indie narrative tree, but the filmmaker‚Äôs earnestness goes a long way in reinvigorating the scenario throughout. Even if the body of the film touches on the rote, Bahrani‚Äôs windswept finale is cinema of the truest sort. An immense close-up of Solo‚Äôs hand holding a stick at the precipice of the namesake mass in Blowing Rock State Park (the only place in the world, the press kit notes, where snow‚Äôs been observed to blow upward) is an image straight out of Leaves of Grass or Omensetter‚Äôs Luck, a fusion of corporeal humanity and ethereal nature reinscribed with the citizens of the new global America.