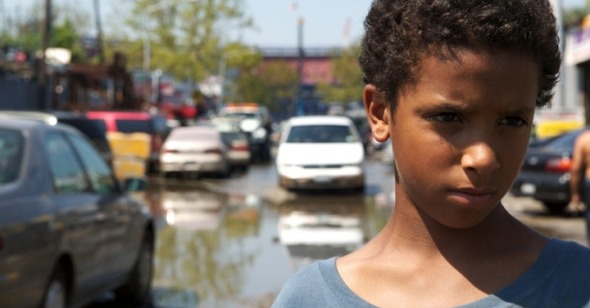 Scraping for a living in the shadow of that holy of professional baseball holies, Shea Stadium, twelve year-old Alejandro (Alejandro Polanco) does everything an impoverished, parentless, out-of-school 12-year-old can do to survive in the lowest depths of one of New York City‚Äôs strangest and direst areas, Willets Point, Queens. He calls his boss Rob‚Äôs (Rob Sowulski) auto body shop both his workplace and home, hustles pornographic DVDs, robs U.S. Open patrons, steals hub caps from Shea‚Äôs parking lot for extra cash, and saves up precious money to buy a used mobile-food van along with his 16-year-old prostitute sister, Isamar (Isamar Gonzales), in order to, as they dream, start their own business.

But at the bottom things don‚Äôt just lead straight up. As in his stunningly assured debut, Man Push Cart, Iranian-American director Ramin Bahrani uses Chop Shop not to sentimentalize the travails of one of NYC‚Äôs multitudinous, ignored underclass, but to discover, as Arthur Miller once said of The Bicycle Thief, ‚ÄúEveryman‚Äôs search for dignity.‚Äù Or in this case, everyboy‚Äôs. Comparisons to Italian Neorealism in general and De Sica in particular (Shoeshine comes most immediately to mind) will inevitably keep surfacing in reviews and discussions of Chop Shop, so it‚Äôs important when calling upon these references to emphasize the moral attitude of that movement as well as its gritty, unadorned style. Alejandro, usually called ‚ÄúAle,‚Äù isn‚Äôt to be merely pitied, but to be understood as a person with the same aspirations and faults as us all, only under circumstances that make each decision a possible do or die one, allowing little room for error.

And err Ale repeatedly does. He struggles to do right by his boss, his sister and himself, but even in the ethical grey zone of Willets Point‚Äîwhere illegal employment, repair work, and a myriad of other shady activities are simple facts of life‚ÄîAle too often resorts to dicey and wrongheaded maneuvers. Bahrani expertly captures the atmosphere of the garish junkyard squalor in cluttered but kinetic compositions featuring the abrasive clanging grind, and the tough guy brags and challenges of the chop-shop strip. When a series of humiliations culminates in the purchase of a lemon of a van we feel, without being manipulated for a single second, the lingering oppression in Ale's jeering environs.

Through compassionate observation Bahrani gets well inside his protagonist‚Äôs head, though he has a more difficult time grasping the language and behavior of a constantly scheming boy on the cusp of adolescence than he did depicting the scarred timidity of a laconic immigrant in Man Push Cart (that performance‚Äôs terrific originator, Ahmad Razvi, thankfully returns here as a macho shop jock). But even if conversations with friend Carlos (Carlos Zapata) evince a clunky, unconvincing naivete (‚ÄúIt‚Äôs gonna be great!‚Äù Carlos shouts at one point with all the street sensibility of Dennis the Menace) and the class tensions that made Man Push Cart so combustible here become abstractions (Shea‚Äôs specter the ever-looming reminder of formidable dreams), Ale‚Äôs protective jealousy of Isamar, or Izzy, constitutes the film‚Äôs complex, paradoxical emotional center. Though Chop Shop leaves Ale‚Äôs destructive and constructive impulses toward his sister unresolved, a brief glimmer of cautious hope emerges at the film‚Äôs very last moment to suggest further undefeated possibilities. Ale‚Äôs future has yet to be written.