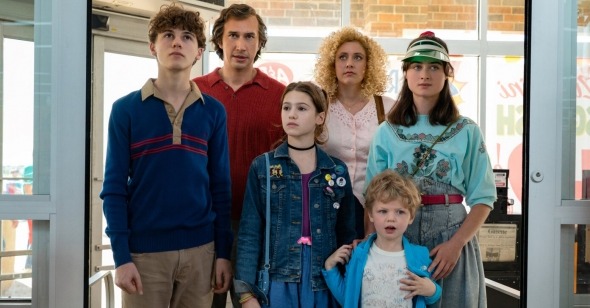 Lost in the Supermarket
By Gavin Smith

Stepping up to the onstage microphone at Alice Tully Hall in late September to introduce White Noise, the opening night selection of the New York Film Festival,‚Äù Noah Baumbach said, with typical graciousness, ‚ÄúThank you, 9:30 crowd.‚Äù He went on to credit the NYFF for his film education and professed that having a film of his fill the opening night slot was ‚Äúa childhood dream.‚Äù He then thanked the absent Don DeLillo ‚Äúfor writing a novel that was so easy to adapt.‚Äù

By the numbers, beyond any other American and most other international filmmakers, Baumbach is the NYFF‚Äôs darling par excellence‚Äînine of his 12 features have played there‚Äîtied with Truffaut, who made 18 films within the timeframe of the festival. (Statistical comparison time! Scorsese: six out of 33 eligible; Jarmusch: eight out of 15; Leigh, seven out of 14; Bergman, three out of 20; more than Fellini, Cassavetes, Tarkovsky, and Allen put together; Baumbach‚Äôs only outdone, for now, by Godard, Chabrol, Resnais, Fassbinder, Almod√≥var, Assayas, Hong Sangsoo, and the director after whom he named his son, Rohmer).

How can this be? To be sure, The Squid and the Whale, Greenberg (not shown in the NYFF), Frances Ha, and Marriage Story are splendid, and his admiring De Palma documentary certainly gets the job done, but aside from the juvenilia of his first two films, his output is lively, enjoyable, and minor. At least six of them are either blatantly or obliquely autobiographical, and there‚Äôs no shame in that. But as Baumbach admitted at his press conference, he wasn‚Äôt in the midst of developing anything else when he turned to DeLillo‚Äôs novel during the pandemic. If his autobiographical well is running dry, the departure of White Noise represents both a new and not so promising phase in his career.

Quite why the novel had the reputation of being unadaptable beats me. Baumbach‚Äôs screenplay certainly distills its essence well enough and painlessly amputates most of the dispensable parts (the appearances of several ex-wives and in-laws). That said, the engaging internal voice of the novel‚Äôs protagonist is ready-made to serve as an effective voiceover narration, but, symptomatic of the film‚Äôs missed opportunities, Baumbach backs away from this option, and confines himself to a few lines of voiceover at the opening of each of the film‚Äôs three chapters. Baumbach‚Äôs handling of what remains of the novel is, however, highly dubious.

The film kicks off with gratuitous self-referentiality as a disembodied voice commands, ‚ÄúOkay, roll film,‚Äù and a projector lens fires up. Immediately we cut to the first of Baumbach‚Äôs many drone-mounted shots, as traffic crawls along a road viewed from high overhead, suggesting a moving film strip. Here again, Baumbach toys with and then abandons a possible stratagem, in this case the constant Brechtian reminder that we are watching a movie‚Äîexcept to the extent that he lifts his frenetic overlapping dialogue from Altman, and from De Palma the 360-degree overhead pans, bold compositional color contrasts, and split diopter shots as the action shifts to murder in the final act. (Also, a station wagon hurtling through the air is an excellent nod to National Lampoon‚Äôs Vacation.)

White Noise is an inadvertently apt title for both novel and film. Of course, DeLillo is referring to the absence of signal, the patternless static on a TV screen or between radio channels, hence part one‚Äôs title, ‚ÄúWaves and Radiation.‚Äù But it also suggests a loud all-white world of people wrestling with their white-people problems, as in the films of Woody Allen and, well, Baumbach‚Äîup until now, that is. Alert to the imperatives of diversity casting, three Black actors play roles that in the novel we have no reason to assume aren‚Äôt as white as all the other dramatis personae, and explicitly so in the case of a major supporting character, Murray Siskind, who‚Äôs plainly Jewish in the novel.

Making the best of his miscasting, Adam Driver plays the film‚Äôs protagonist, Jack, father of four and a rockstar professor of Hitler Studies at the College-on-the-Hill, a comfortable average liberal arts university. Jack moves through his campus world and suburban domestic life in a permanent state of mild bewilderment and comfortable denial, dismissing the concerns of his daughter and budding Stasi informer Denise (Raffey Cassidy), who has been monitoring his wife Babette (Greta Gerwig) for evidence that she is hiding something from the family. He‚Äôs also routinely assailed by his son Heinrich (Sam Nivola), who could be described as a vigilant Hitler Youth type (seemingly named after leading Nazi and Holocaust architect Himmler), who lives to demonstrate his father‚Äôs cognitive shortcomings and will prove something of a lecturer himself. In time the family dynamics will be conclusively inverted: when the chips are down Jack‚Äôs judgmental kids handle matters more authoritatively than their parents, while their father‚Äôs domestic and psychic stability is upended by intimations of mortality.

A morbid fascination with catastrophe abounds in this 1980s candy-colored supermarket culture. It‚Äôs debated in the faculty lounge over lunch, and, in a foreshadowing of events, Jack‚Äôs new colleague Murray (Don Cheadle), whose field is ‚ÄúLiving Icons,‚Äù lectures in class over a reel of movie car crashes on the ‚ÄúAmerican optimism‚Äù of cinematic automotive carnage, a form of ‚Äúcarefree enjoyment foreign movies never capture.‚Äù And it is Murray too, who regularly shows up out of the blue at Jack‚Äôs elbow to drop knowing aphorisms, including a seemingly key observation that goes nowhere in the film: ‚ÄúThe family is the cradle of the world‚Äôs misinformation.‚Äù

Disaster befalls the region in the form of a collision between a train carrying toxic chemicals and a 14-wheeler loaded with gasoline. In a ludicrous sequence you won‚Äôt find in the novel, the looming collision and its explosive outcome is intercut with dueling lectures on Hitler and Elvis delivered by Jack and Murray, who has asked Jack to lend him some of his academic credibility to boost his efforts to ‚Äúdo the same with Elvis that you did for Hitler‚Äù as a new field of study. To the admiration of the rapt student and faculty onlookers, Jack ‚Äúwins‚Äù this rhetorical battle of scholarship with what‚Äôs supposed to be a virtuoso performance, culminating, at the moment of impact, with flash cutting from a Nazi ‚ÄúSieg Heil‚Äù salute to an Elvis karate move to the train explosion. (Huh? How is this to the benefit of Murray‚Äôs academic status, as he seems to feel it is?)

‚ÄúAll plots are deathward,‚Äù observes Jack, and the film takes him at his word. A lethal gas cloud released by the train disaster triggers a chaotic mass evacuation, and Jack is briefly exposed to its potentially fatal toxins. Breakneck-paced family bickering yields to large-scale action movie mayhem when the scout camp evacuation center itself must be evacuated, and Baumbach certainly shows some chops here (maybe these scenes are a calling card?). When order is restored, both Jack and Babette are left nursing their respective fears of death. For Babette, it‚Äôs Existential. Her secret is that she‚Äôs been exchanging sex for quantities of Dylar, an experimental drug designed to suppress fear of mortality, and the scene in which she confesses this to Jack deserves a better movie around it: Gerwig‚Äôs performance soars above everything else in the film and may be the best work she‚Äôs done to date, demonstrating a breathtaking level of conviction. Jack‚Äôs sublimated response to the prospect of impending or eventual death throws us back into movieland with an act of revenge.

The most seemingly ‚Äúunfilmable‚Äù challenge facing anyone adapting DeLillo‚Äôs novel is its ending. As it builds to the murder attempt, the novel shifts into an increasingly phantasmagoric register (in keeping with Jack‚Äôs mental deterioration) that would be a tough to bring off for most filmmakers. Baumbach makes obvious use of the De Palma stylistics as a substitute for delirium and rejiggers the action so that Babette turns up to be shot and wounded at the scene of the crime. The emergency room at the German nun‚Äôs hospital is treated almost matter-of-factly rather than as something out of a fever dream, and Baumbach settles the crisis of belief that‚Äôs sketched here through Barbara Sukowa‚Äôs Sister Hermann (‚ÄúSomeone must appear to believe‚Ä¶ If we didn‚Äôt pretend to believe the whole world would collapse‚Äù) with a bromide for the ages: ‚ÄúMaybe you should try to believe in each other.‚Äù The sunlight refracted through the plastic Dylar package held between Denise‚Äôs fingers onto her face in an early scene in the family kitchen is now rhymed with the sunlight that falls through an overhead window onto Jack and Babette as they lie in their hospital beds at film‚Äôs end, conferring on them a transcendental state of grace that is nothing if not sarcasm.

The busyness and expansiveness and deft choreography of White Noise don‚Äôt quite camouflage the film‚Äôs superficial engagement with its played-out themes (consumerism, better living through chemistry, coming to terms with mortality) located in family life and couples, Baumbach‚Äôs perennial territory. The supermarket musical finale set to LCD Soundsystem‚Äôs ‚ÄúNew Body Rhumba‚Äù (a ‚Äúcatchy song about death‚Äù that is this film‚Äôs equivalent of The Life of Brian‚Äôs ‚ÄúAlways Look on the Bright Side of Life‚Äù) is a ‚Äúcute‚Äù retreat from everything that‚Äôs been at least attempted in the previous two hours. White Noise is a comedy in which the mostly glib humor doesn‚Äôt land, at least judging from the paucity of laughter in the press and public screenings I attended. There‚Äôs too much noise here and not enough signal.